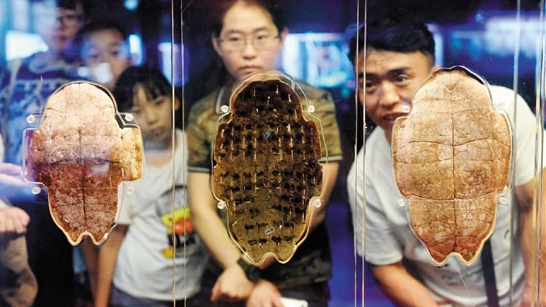 BEIJING, May 31 (Xinhua) -- China will hold a series of events to commemorate the 120th anniversary of the discovery of oracle bone inscriptions, the Ministry of Education announced Friday.

Tian Lixin, head of the department for language application and information management under the ministry, said the ministry would host the events jointly with the Publicity Department of the Communist Party of China Central Committee, Ministry of Culture and Tourism, Ministry of Science and Technology, National Cultural Heritage Administration, Chinese Academy of Social Sciences, and the People"s Government of Henan Province.

The events will include a workshop in Beijing, a themed exhibition at the National Museum of China as well as an international symposium in Anyang, Henan Province, mostly in September and October, Tian said.

Tian said Chinese authorities are also taking various measures, such as setting up an expert committee and initiating research programs, to support the study and application of oracle bone inscriptions and other ancient Chinese writings.

"These efforts are to dig into the history, ideas, and culture of the language and to showcase the essence of Chinese civilization," the official said.

Jiaguwen, or oracle bone inscriptions, are an ancient Chinese language named for their inscriptions on tortoise shells and animal bones. They are a primitive form of Chinese characters and the oldest fully-developed characters in China.

Oracle bone inscription is one of the four ancient characters in the world and the only text in ancient Chinese characters that has been passed down to the present.