HARBIN, July 29 -- Sunday is International Tiger Day, and the world's largest breeding center for Siberian tigers in northeast China has long dreamed of releasing captive-bred big cats into the wild to restore the population.

Siberian tigers, also known as Amur tigers, mainly live in east Russia, northeast China and northern parts of the Korean Peninsula. One of the world's most endangered species, less than 500 Siberian tigers are believed to live in the wild, with only around 20 in China.

Jiang Guangshun, deputy director of National Forestry and Grassland Administration feline research center, expects the wild Siberian tiger population in China to reach 100 by 2050. "But this is not fast enough to restore the wild population. We are planning to send more capitive-bred animals into the wild after training to speed up the process," he said. 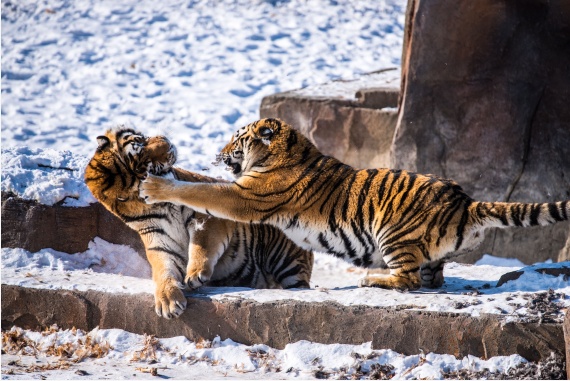 Land of milk and vitamins

In 1986, China began a captive breeding program. At that time, the Hengdaohezi feline breeding center in the suburbs of Harbin, capital of Heilongjiang Province, had only eight tigers, but today it is home to more than 1,000.

In the early years, no one in the center had experience in captive breeding.

"When I was a child, my mother was busy taking care of tiger cubs all day and so I used to go to the park after school and during holidays. I grew up with the cubs and it was my mother who taught me how to tend to them," said Song Zhiyang, 31, a keeper at the park run by the center.

Some tiger mothers do not have enough milk or the skills to care for their offspring, so the keepers have to work in shifts, around the clock, to take care of the cubs. By trial and error, keepers found that warm goats' milk with added vitamins and calcium was the best food.

"To keepers, tiger cubs are very much like their children and raising newborns is difficult," said veterinarian Liu Lingguo at the park. "You have to change their diapers, wash them and collect real-time data of their weight and temperature for six months," said Liu. 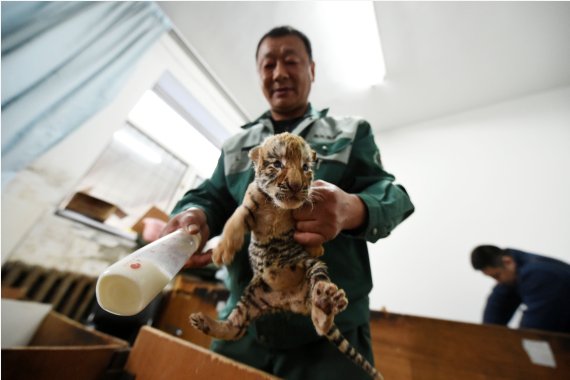 After 32 years, there is a fourth generation of captive-bred tigers and the center has strict measures to prevent inbreeding. Data bases include family trees for each tiger.

In 2011 and 2015, the park helped some breed in the wild and the park is now selecting suitable tigers to release in the near future.

"We need to make sure that the captive-bred stock can reproduce naturally and their offspring can survive," said Liu Dan, deputy director of the center.

Previous wild training has helped the captive-bred tigers adapt to the wild as well as improved their running, hunting and mating skills, said Liu.

Life through a lens

Launched in 1998, a forest protection project has greatly improved ecosystems in northeast China, providing more habitat for the tigers. Commercial logging has been banned in state forests in the northeast since 2015. As the environment has improved, more tigers have been seen.

In addition, a 14,600-square-km national park for Siberian tigers and Amur leopards opened in Heilongjiang and neighboring Jilin Province in July last year. 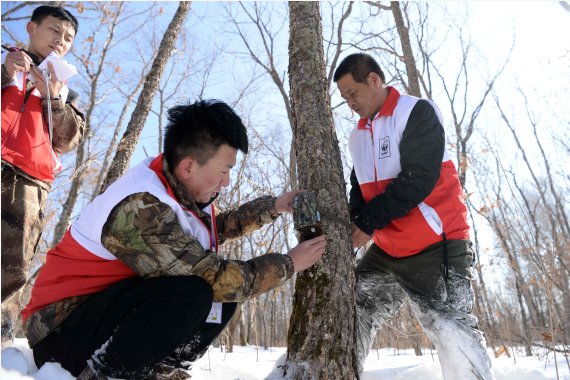 The park is scheduled to be complete in 2020 and a monitoring system will cover the entire area, with over 100,000 cameras collecting data on wildlife.

In February, China began monitoring the habitat of the tigers and Amur leopards. More than 100 monitoring devices have been installed in Hunchun, Jilin Province, covering a 500-square-km area where the two species are frequently seen.

"We have an emotional bond with the tigers," said Huang Haitao, the leading veterinarian of the Siberian Tiger Park in Harbin.

"All of us will shed tears when the tigers finally return to the wild," said Huang, with tears already welling up in his eyes. "But we all know that the tigers belong to nature and should be set free sooner rather than later."