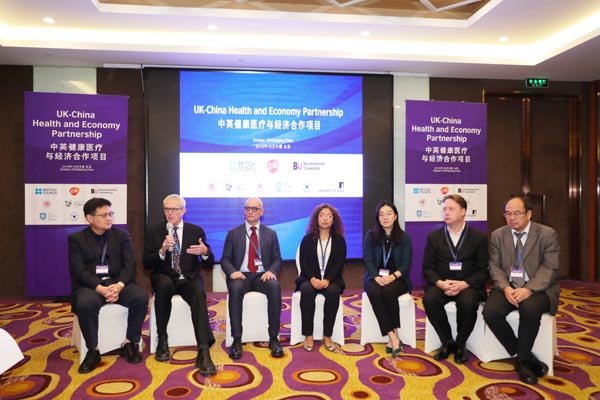 The 2019 UK-China Health and Economy Partnership was recently held in Beijing, attended by scholars from seven of the countries' top universities.

Specializing in pharmacoeconomics - a discipline dealing with the economics and economic evaluation of the use of drugs in medicine - the academics delivered speeches about their collaborations and development in the field and their expectations of the partnership.

Overseen by the British Council, the partnership aims to create measurable benefits for Chinese patients and the economy by generating new health economics expertise.

It promotes long-term educational collaboration in pharmacoeconomics between leading academic institutions in the two countries through innovation.

The collaboration, according to the partnership organizers, will provide research-led technical advice that supports the reform of China's Health Technology Assessment processes and builds China's capacity in health economics. It also seeks to support Chinese universities in achieving the status of "Double First-Class", a national program for China's higher education excellence.

The partnership was originally established in Jinan, Shandong province, in November 2017 by Bournemouth University. A year later, the British Council and GlaxoSmith-Kline agreed to extend the partnership until January 2021, with GSK providing a total fund of 420,000 pounds ($544,068) for the cause.

Dong Hengjin from Zhejiang University, a keynote speaker at the event, said: "It's a great opportunity for us to learn from our UK counterparts about theories, methodologies and mechanisms of pharmacoeconomics, but we should not apply their experience blindly and should tailor measures to fit China's conditions.

"The research of pharmacoeconomics provides evidence for decision-making in the medical insurance system and clinical treatment, which will eventually benefit the patients. For example, it informs decisions about which medications can be included in the system."

According to Dong, as China's medical insurance system has included some cancer drugs in recent years, it means that patients can afford the expensive medication through favorable rates of reimbursement.

In July, the central government issued an action plan for implementing the Healthy China initiative from 2019 to 2030. It outlines 15 major health campaigns to "intervene in health-influencing factors, protect full-life-cycle health, and prevent and control major diseases".

Hu Min from Fudan University says: "As the Chinese people have boosted their standard of living, they pay more attention to their own health than before and have diverse demands."

According to her, graduates of the discipline will have a wide choice of employment options in China, ranging from medicine companies, centers for control to numerous related institutions.

Andrea Manca from the University of York says: "It's important to remember that a healthy population produces more, increases the economy, and puts less burden on the healthcare system. So, a country's budget can be invested in other areas with research or investment priorities."

Simon Dixon from the University of Sheffield agrees. He says: "The most nonacademic benefit is that our research will improve health systems and decision-making in both countries, which will allow hospitals to treat more patients with the same amount of money and will benefit the quality and length of life of patients in both countries."