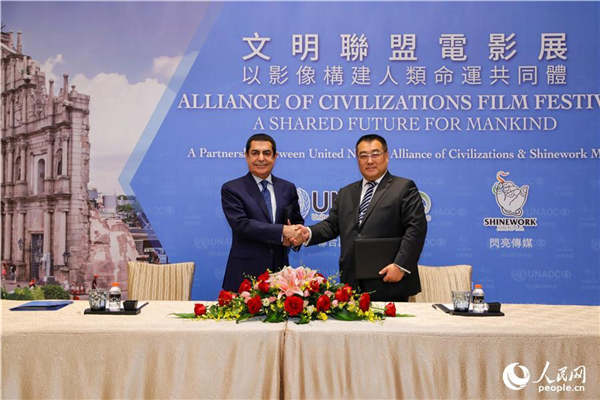 The United Nations Alliance of Civilizations and Shinework Media Group signed a memorandum of understanding to co-stage an annual global film festival to promote the idea worldwide. (Photo: people.cn)

The vision of building a community with shared future for mankind, first proposed by President Xi Jinping in January 2017, took a step forward on Monday as a Beijing-based media group signed a memorandum of understanding with the United Nations to co-stage an annual global film festival to promote the idea worldwide.

The festival, to be jointly held by the United Nations Alliance of Civilizations and Shinework Media Group, will have as its theme "Building a Community with Shared Future for Mankind with Films" and will begin in the latter half of 2019 in the Macao Special Administrative Region.

"Building a community with shared future for mankind is an ambitious goal that can only be accomplished with concerted efforts from all. It calls for joint efforts by governments, civil society, academia, media and corporate businesses, as well as the film sector," said Nassir Abdulaziz Al-Nasser, United Nations high representative for the alliance of civilizations, after the signing ceremony.

The festival will show 30 movies - selected worldwide and reviewed by experts from the film industry - that compete for the Top Ten movie awards and other prizes. The award ceremony for winning movies will be held in Macao with internationally renowned figures - such as former UN officials and ambassadors - as award presenters.

The festival will also take the winning movies on a worldwide tour, to acquaint audiences from different parts of the globe with the message of a shared future for mankind.

"It is our hope that we can hear the stories and voices of different countries through film as the bridge of people-to-people exchange, which can generate inspiration, promote mutual respect and understanding among different civilizations, and build a more harmonious international community," Al-Nasser added.

Established in 2005, the UNAOC has 146 members, of which 119 are UN member states, including China. Its mission is to help dissolve tensions rooted in cultural differences and for building understanding between communities and nations.

The film festival corresponds with the UNAOC's mission, as movies are an important tool of cultural exchange, said Al-Nasser, who expressed confidence that the festival would help the UNAOC to achieve its goal.

Al-Nasser said the reason Macao was chosen as the site of the festival was because the SAR had served as a key stop along the ancient Maritime Silk Road and now, through diversifying its economy, has further established itself as a window for cultural exchanges between China and foreign countries.

Jonathan Shen, founder and chief executive of Shinework Media, which will take charge of running the festival, said movies are an ideal medium to promote building a shared future for mankind because they tell stories to masses of people.

Shen said the festival will also serve as a platform for gaining the world's understanding and recognition of visions proposed by the UN.