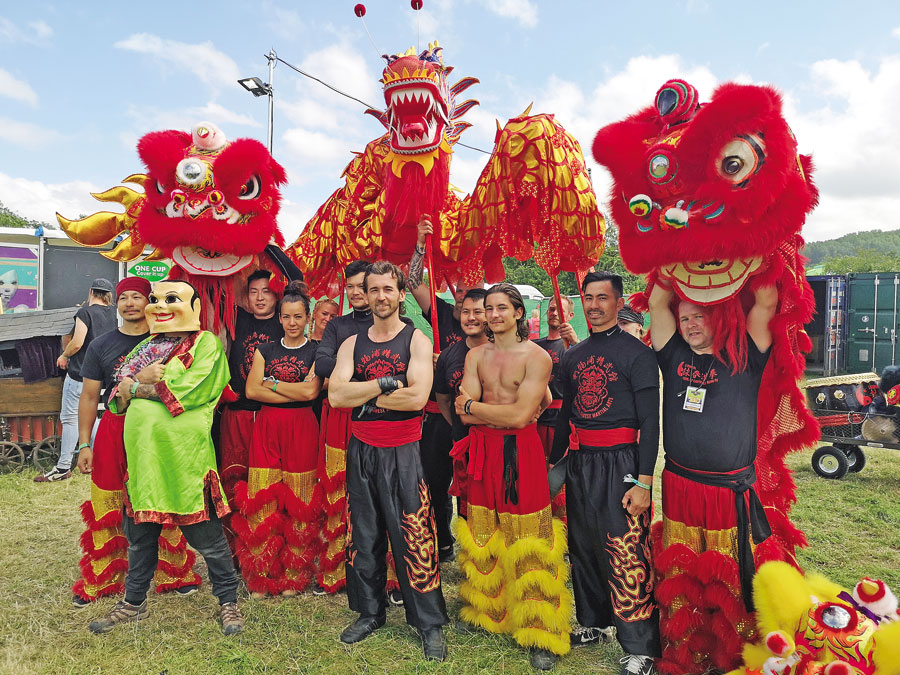 Buzzing and breathless, Rayray needed a minute to take it all in when she came down from the stage at Glastonbury Festival this past weekend.

The DJ from Taiwan has been a mainstay of Asia's electronic dance music scene for more than a decade – her work week is a blurred montage of international flights, hard-partying crowds and marathon sets at nightclubs from Taipei to Tokyo – so she's no stranger to the lifestyle.

But this set was different – this was Glastonbury, the largest festival in the United Kingdom and one of the most iconic music events on the planet.

"This was a dream come true," she shouted unnecessarily, her eardrums still adjusting. "Two years ago, I was playing here at the Blue Stage, and it was so much fun. But this year they moved me to the Sonic Stage, which is way bigger. It was my honor to represent Asia."

The 28-year-old made her third-ever appearance at Glastonbury Festival over the weekend. For her, the continued invitations from the organizers represent something bigger than a vote of confidence in her individual ability. She is hopeful that now she has opened the door, more Chinese DJs will walk through it.

"In my production, I always have Chinese instruments, Chinese culture and a Chinese vibe. I want to bring that here and I hope people can appreciate it," she said. "I want to bring my music, the music from Asia, to the crowd in Europe, and make people understand what the difference is, and the different way we party."

This year's event was hailed as the "best one yet" by organizer Emily Eavis, whose father Michael put on the first festival at Worthy Farm in Glastonbury in 1970. That year 1,500 fans came to see headlining act T.Rex – these days more than 200,000 people set up camp on the farm's green hillsides.

Under clear sunny skies, Glastonbury 2019 produced a number of special moments. London grime-artist Stormzy became the first black British solo act to headline the festival, and staged a performance so epic organizers described it as a "one-man Olympic ceremony".

Kylie Minogue finally got her chance to perform on the hallowed Pyramid Stage, after a cancer diagnosis forced her to cancel her set in 2005. It is estimated that the Australian pop legend drew the largest crowd in the festival's 48-year history.

And teenage fan Alex Mann was catapulted into nationwide fame when British rapper Dave invited him on stage to perform a track, which the 15-year-old executed so flawlessly the crowd chanted his name for half a minute. Mann has since appeared on several major national radio and television shows and accrued almost 290,000 followers on social media.

British rock royalty The Cure and United States band The Killers both headlined, and beyond musical acts the festival hosted hundreds of other performances, including dance, poetry, comedy, theatre, and circus.

At the circus central stage, festival-goers were treated to a colorful spectacle of ancient Chinese culture when the Liverpool Chinese Martial Arts association performed a lion dance. The group has been coming to Glastonbury for the last 21 years, ever since they were first invited by festival co-founder Arabella Churchill.

"We are based in Liverpool which has got the oldest Chinatown in Europe, so we have a rich history of the two cultures mixing together," said James Roach, who heads the group of UK and British-Chinese performers.

"We try and represent Chinese culture as authentically as we can in the conditions that we've got. Glastonbury tries to represent all cultures, so we are kind of the Chinese slice that tries to keep that bit alive. It's important for us on two levels – one, it's the most important festival in the world, and two it's the best festival in the world. So, if you are going to do it, you have to do it properly."

Comedian Phil Wang delivered a standup routine at the Cabaret Tent that was both disarmingly charming and brilliantly cutting. The son of a Chinese-Malaysian father and British mother, 29-year-old Wang opened by dissecting his full name (the product of a "cultural compromise"), setting the tone for a witty assault on white and Asian stereotypes.

"I find that the conversations about race lack nuance a lot of the time," said the comic, who hosts a comedy series on BBC Radio 4 called Wangsplaining.

"Either people are careless about it and hurt people's feelings, or they are overly cautious and patronizing," he added. "So I think the only way to get into that sensible middle ground between the two is to talk about it openly, about my experiences, about my thoughts and also to give people a break – people who always think they are on the edge of being culturally or racially insensitive – to kind of get on their side a little and show them they don't have to worry so much. So that's the line I am trying to tread."

Glastonbury organizers themselves touched a nerve in 2017, when they were criticized for going with three white male headlining acts. But Stormzy's thrilling showing this year has been described as a big win for diversity at the festival, and with Rayray, Wang and members of Liverpool's Chinese community all performing strongly, China's profile at the festival now has a firm foundation on which to build.