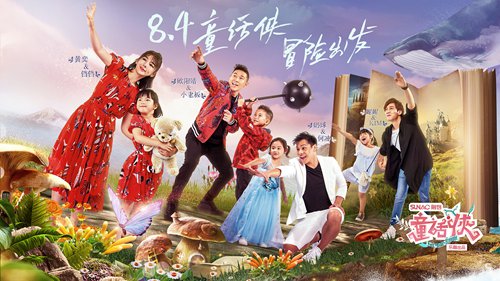 The cheers and applause that Chinese-American rapper MC Jin received at a Beijing event on Tuesday promoting him and his 6-year-old son Chance's role on a Chinese parenting show were on par with that of his rap concerts.

"Let's perform a magic trick together, okay?" the 36-year-old rapper said in Putonghua (Standard Chinese) to his son, crouching down on the stage to face the quiet little boy, who was acting a bit shy in front of the crowd.

"So you do understand what I am talking about!" joked MC Jin, bursting into laughter along with the audience. MC Jin later told the Global Times that since his son was born and raised in the US, he has difficulties understanding Putonghua.

Despite this, his son still has a strong interest in Chinese culture and hopes to share what he learns with people overseas.

The father and son will go on an adventure with three other parent-child pairs in the Chinese reality show Fairytale Knight, which is scheduled to air in August.

Calling itself the "first immersive children's interactive reality show in China," Fairytale Knight aims to tell a Chinese story involving parents and their children as they go on various adventures.

During the show, artificial intelligence plays an important part in helping improve communication between parents and children.

Though this is the rapper's reality show debut with his son, this is by no means MC Jin's first time appearing on the small screen in China.

Dubbed by US magazine QG as "an iconic figure in Asian American pop cultural lore," MC Jin, or Jin Au-yeung, returned to the public limelight in the Chinese mainland after he shone as a competitor on Chinese rap music show The Rap of China in 2017.

While to one individual he is "just a joke" of a rapper with no skills, others regard him as an icon, "a legend."

"I don't see myself as an 'icon' but I see some people really see me as that and it depends on who you ask," MC Jin told the Global Times in an interview after the event on Tuesday.

MC Jin shot to fame in the US at the age of 19 after winning the 106 & Park's weekly "Freestyle Friday" rap battle competition for seven weeks in a row in 2002. After the competition, he became the first Asian American solo rapper to be signed to a major US record label. In 2004, he released his debut album The Rest is History, which reached the No.54 spot on the Billboard Top 200 albums chart.

"At that time I was just a young guy that loves hip hop, loves to rap. Not just that, I wanted to be a rap star, I wanted to make money, I wanted fame, I wanted power, I wanted respect, that's all I was at that time," MC Jin told the Global Times.

As for whether he had encountered any obstacles in the US hip hop community due to his ethnic Chinese identity - a question that the rapper said he had been asked a million times - MC Jin said instead of external obstacles, the biggest barriers came from inside himself.

"The obstacle is just trying to figure out who am I. They said I am this, am I this? The biggest obstacle is in my own heart, like finding my own identity. But, I am slowly overcoming that obstacle," noted the rapper.

After experiencing ups and downs developing his rap career in the US, MC Jin went to Hong Kong in 2008 to continue his career and make a name for himself not only by rapping but also acting.

"But then you get older, you see that some of these things don't mean much, as fast as you can get it, as fast as it could go - money, fame, all of that," said the rapper.

A change of heart also impacted how MC Jin viewed people's divided opinions about him and his rapping career.

"So that's why I am in the middle now, I agree with person A, I think 'Yes, I am just a regular person.' But I also kind of appreciate what person B is saying, 'Your music, your career really inspired me,'" he noted.

The birth of Chance in 2012 was a big turning point in MC Jin's life. He left his booming career in Hong Kong and returned to the US.

"I don't think it is as complex as people may see it, like 'He sacrificed his career to go back to the US for his son.' You have to make a decision and at that time it's something that I was contemplating, but it was also a simple decision too," he said.

Bringing his son into the public spotlight for the first time was also "a big decision," MC Jin admitted, adding that the decision was made after talking with his wife and Chance as well.

As a father, MC Jin said he now has a better understanding about why his parents disapproved of his decision to pursue a rap career as a teenager.

"Then I was just thinking like, 'Why are you so disapproving of something that I love so much?' But now I see that it was just all concerns and worries," noted MC Jin, saying that he also wants to encourage Chance to go on a path that is somewhat "stable."

"But life is unstable, so as long as he [Chance] is happy and healthy, [I'm happy,]" he said, smiling.