Chinese and US gastronomes seek to build bridges through culinary culture 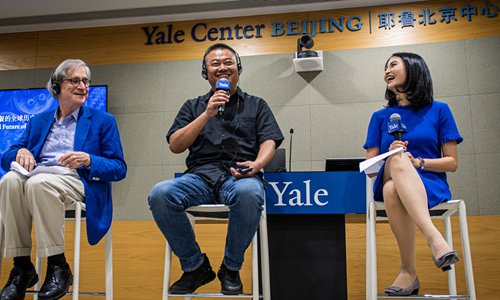 Paul Freedman (left) and Chen Xiaoqing attend the Food: A Feast for the Eyes and Palate in China and the World Forum on August 16 in Beijing. (Photo: Global Times)

While trade wars can cause ethnic barriers and cultural prejudices, trade itself has a rather interesting way of revealing the connections between people and culture. This is especially true when it comes to many of the food we love. For example, the hero of condiments - ketchup - perfectly conveys how cultures can fuse together if we take a look at how its origins were shaped by centuries of trade.

"Today, there are countless barriers between races for a variety of reasons, but what really unites us all is food. That's why we call for ketchup instead of hatred, for delicacies instead of war," Chen Xiaoqing, one of the most well-known documentary directors in China, said while speaking at the Food: A Feast for the Eyes and Palate, in China and the World forum with Paul Freedman, professor of History at Yale University, at the Yale Center Beijing on August 16.

Ketchup comes from the Hokkien word kê-tsiap, which refers to a type of pickled fish sauce. It is believed that British sailors bought the sauce from the Chinese in Indonesia and tried to replicate it upon their return home. The British added onions, mushrooms, walnuts, tomatoes, sugar and vinegar to the sauce, making it the basic recipe for today's ketchup.

Such historical ties are just the tip of the iceberg when investigating how Eastern cuisine infiltrated the Western world.

Chen's eight-episode documentary Once Upon a Bite, filmed across 22 countries over four years and a sequel to his A Bite of China, aims to explore the deep roots of Eastern food in the West and focus on how the world shares cooking practices and ingredients. The show has earned 1 billion views on Tencent Video.

Freedman is an expert on the role of food in shaping cultures and historical trends and the author of The History of Taste, which is seen as an authoritative bible by many food documentary directors, including Chen.

"Food is a more genial, soft and acceptable way to introduce Chinese culture and thought to others. I hope my documentary can stimulate people's taste buds and inspire them to try more," Chen told the Global Times.

Chen dominated screens in China with his series A Bite of China in 2012, but he never expected that his more recent shorter series Flavorful Origins would also be well-received by overseas audiences.

The series, which explores the origins of different Chinese dishes, was translated into 50 languages and streamed in 190 countries and regions after it was bought by Netflix in 2019, making it the first original Chinese food documentary to go global.

"I'm binging Flavorful Origins on Netflix and now all I want to do is travel the world and eat food," wrote one netizen on Twitter.

"For Chinese food, Americans are both biased and love it, though this is not always contradictory. They are scared because some Chinese food can be made from organs, but I would say the prevailing feeling is love… That's why there are more Chinese restaurants in the US than McDonalds and KFC combined," Freedman told the Global Times.

But Freedman revealed that most people in the US view Chinese cuisine as simple and cheap food and that they don't realize there can be more exquisite dishes - that is until a show like Chen's presents them with the many elaborate delicacies in China.

Chen and crew are working hard to change people's preconceptions toward Chinese cuisine.

"We have a large group of professional researchers all over the world working months before shooting to discover the similarities and distinctions among food cultures across different regions," Chen told the Global Times, noting that this research has also broken many Chinese people's preconceptions about Western food.

"For instance, we thought Americans don't like offal, but unexpectedly our film crews are currently very obsessed with the many delicious methods of cooking offal in the US, to the point that they don't want to leave," said Chen.

"For another example, take pork. We visited Jabugo in Spain, Parma in Italy, the provinces of Yunnan, Zhejiang and Anhui in China and Virginia in the US and found that in the northern hemisphere, sausages are preserved in almost the same way, without learning from each other, although the flavors are not exactly the same," Chen said.

"The flavor and aesthetics of Chinese food is not quite the same as those of the West. This is why we need to build a bridge so they can see the beauty of Chinese food and be more willing to take a step toward understanding," he explained.

When building bridges, keeping potential offenses in mind is important. Scenes that might make Western viewers uncomfortable, such as shots of people spitting out bones during a meal, were cut from Chen's series on Netflix to accommodate global audiences.

Chen's next stop is Lyon, France, the home of Paul Bocuse, one of the world's first celebrity chefs. For Chen, Lyon's appeal lies not only in its culinary inclusiveness, but also in its place as the birthplace of documentaries, considering it is the homeland of the Lumière brothers.