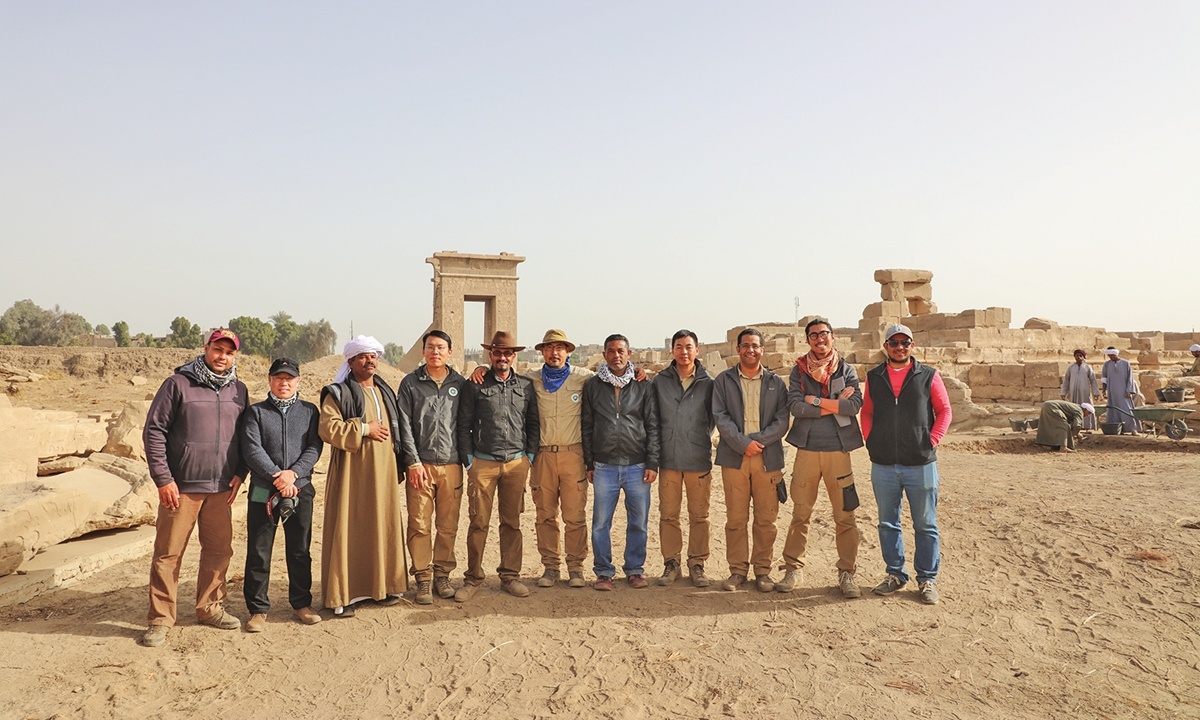 Chinese and Egyptian archaeologists pose for a picture at the Montu Temple site in Luxor, Egypt. (Photo: Courtesy of Jia Xiaobing)

Egypt, an ancient country with a history going back thousands of years, seems like a mysterious destination for many people around the world. This was also true for the Chinese archaeological team that was sent there on a mission to help local teams with an excavation project.

When given the task of going to Egypt for the project, the mood of the head of the mission, Jia Xiaobing, was complicated. He told the Global Times that he was very excited at first.

"Having an opportunity to go to such an ancient country would be exciting for any archaeologist," he said.

But he also felt a bit worried and stressed since he had never been to Egypt and all his knowledge of the country came from books or online.

Since this was China's first archaeological mission to Egypt, how to carry out the work was another unknown for him. 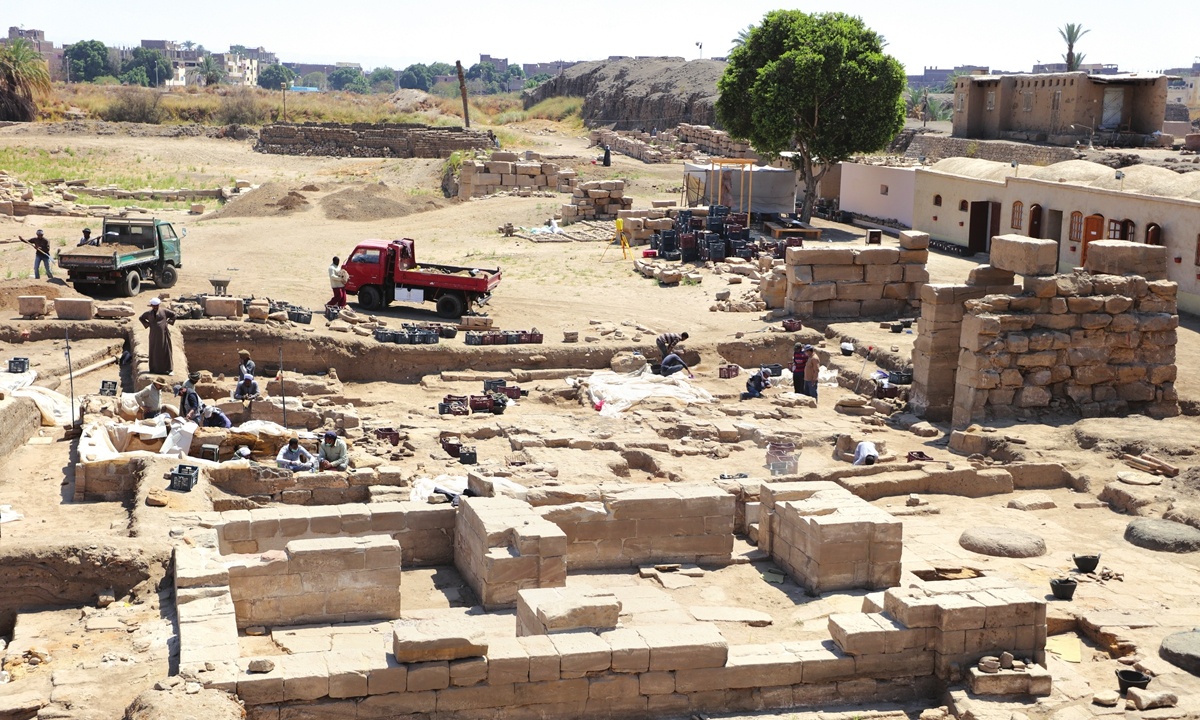 In November 2018, the Chinese team from the Institute of Archaeology, Chinese Academy of Social Sciences departed to Egypt for a joint archaeological project at the site of the Montu Temple in Luxor.

"Luxor is rich in many Egyptian antiquities," Jia said, explaining that the best season to carry out archaeological work in Egypt is from late November to April since the temperature in other months of the year can reach more than 40 C.

According to Jia, in the first-phase work, 2018-19 season, he and three other experts participated in the project, the goal of which was to clean up the site, covering about 2,000 square meters, as there were many weeds and some abandoned rubbish left by previous Western archaeologists.

In the 1940s and 1950s, the French Institute for Oriental Archaeology in Cairo first carried out systematic archaeological excavations at the Montu Temple site. However, the work was interrupted by World War II, so a lot of information could not be recorded and preserved at that time.

From the 1990s till the beginning of the 21st century, archaeologists continued to conduct surveys of the temple area, but they were all short-term studies of single buildings that did not take a comprehensive look at the temple site as a whole.

Jia said the work carried out during the second phase, 2019-20 season, involved two areas, the Osirian Chapels (Area 1) and the junction between the Montu Temple and the Maat Temple (Area 2).

They discovered a paved courtyard with four granite column bases in the area between the Chapel of Amenardis I, the second of three chapels in the temple, and its sandstone gate.

The COVID-19 pandemic posed a difficult challenge for the project.

According to Jia, before the coronavirus outbreak, they usually needed over 50 people to survey a single big building, but as the pandemic worsened, they had to reduce the number of on-site staff to 20.

"All staff were required to wear masks, and we tried our best to maintain social distancing on site," he said.

Although the pandemic did not impact their overall plan, it caused a lot of mental stress and pressure for each member of the project.

"No one knew how strong the virus was, and we tried our best to stay healthy," Jia said.

Their work was finished in late March, and they were scheduled to return in April. However, due to travel restrictions implemented after the outbreak, they were only able to return to China in May.

Since the area they explored was some 2,000 square meters in size, it was challenging to conduct the work efficiently as a joint team from two different countries.

According to Jia, they divided the Egyptian-Chinese team into two groups, and they would communicate with each other when someone came up with new ideas.

"We talked a lot during the cooperation, so both sides could get some ideas or suggestions from each other."

During the cooperation, Jia noticed that Egypt had one system in particular that his team could learn from.

For archaeological work in China, the project leader usually spends a lot of time and energy in coordinating administrative jobs such as the division of labor and managing each member. But in the Egyptian team, the administrative work is usually done by another member of the team, so the leader can have more time to focus on research.

Meanwhile, Jia said that the Chinese way of marking unearthed cultural relics was praised by the Egyptian team, as the Chinese way can quickly provide researchers with specific information about a relic such as its name and location of discovery.

The third phase of work, in the 2020-21 season, is scheduled to start in November. Although the plan has been approved by both countries, the decision on implementing the plan has yet to be confirmed due to the ongoing COVID-19 pandemic.

Jia pointed out that during the next season, they are going to continue to explore undiscovered parts of the temple site, and plan to put together a general layout of the whole area.

"Through the cooperation, both sides have gained a deeper understanding of each other's culture. We welcome more similar cultural projects in the future," Jia said.