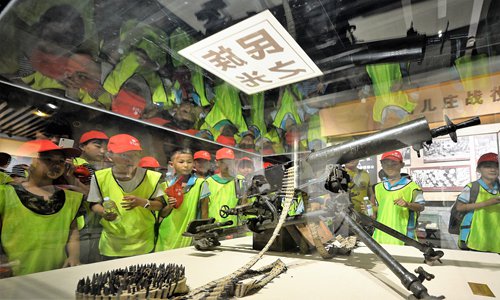 Chinese military media posted an editorial, vowing to build a strong nation armed with a strong military on Sunday, the 82nd anniversary of the July 7th Incident, which marked the outbreak in 1937 of the War of Resistance by the Chinese people against Japanese aggression.

The historical lessons can guide the nation's future, the PLA Daily said.

"The bullet holes on the Lugou Bridge warn us… a strong country must have a strong army and only a strong army can defend the country," the article said. "Peace is in favor. War is not being afraid, and we can handle both."

Other state media including the Xinhua News Agency also commented on the anniversary.

With the headline "Never forget history, make China strong," a Xinhua commentary said the nation has come from suffering to glory in 82 years.

"History told us backwardness would be beaten while only development can make us stronger," the article commented.

The article's author called on all individual Chinese to unite and strive with patriotism, go forward with a strong belief of winning, further build a stronger and more prosperous country and make the people happier.

"This is the best commemoration of the history," the editorial said.

Events to mark the date were held in China and overseas.

To commemorate the anniversary, Cai Qi, Party secretary of Beijing, held a ceremony with more than 500 representatives including war veterans, soldiers and government officials at the Museum of the War of Chinese People's Resistance against Japanese Aggression, the Beijing News reported.

The museum also launched an exhibition which teenagers were organized to visit, the media said.

To inspire the Japanese people to understand the true history and pray that war would not happen again, Kanagawa Prefecture women's liaison association for Japan-China friendship held a meeting in Kanagawa, Japan, where they invited a Japanese scholar to make a speech, China Radio International Online reported on Sunday.

On China's Twitter-like Weibo platform, the topic "July 7th Incident" had been viewed more than 700 million times as of press time. One Chinese Net user urged readers to "cherish the memory of martyrs, strive to become stronger."