Three Chinese photographers have claimed accolades in the world's largest astronomy photography competition and will now have their work displayed at an exhibition in London. 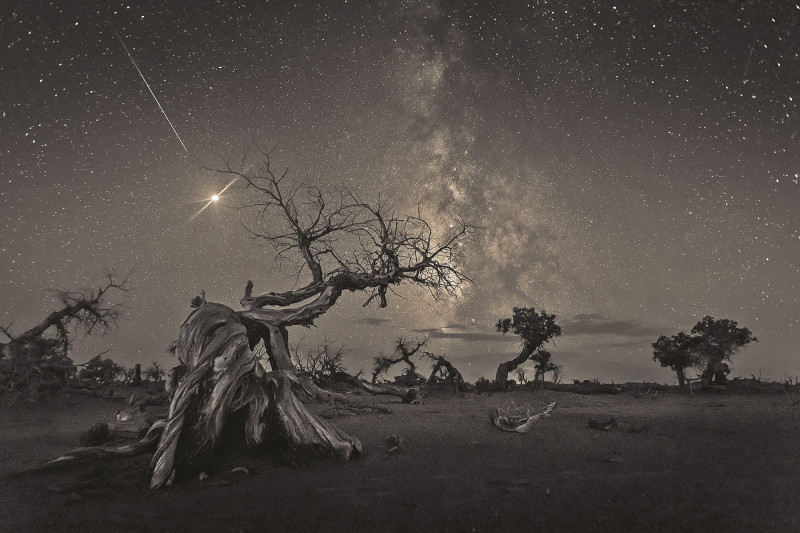 Wang Zheng won the Sykscapes category for this image from the Gobi Desert. (Photo: the Royal Museums Greenwich)

Chinese entrants won top prize in two out of 11 categories in the Royal Observatory's Insight Investment Astronomy Photographer of the Year 2019 awards, while another placed third.

The competition celebrates outstanding images of celestial objects, cosmic events and regions of the night sky. It is widely considered to be the most prestigious competition of its kind.

Wang Zheng won the "Skyscapes" category in this year's competition. Dong Shuchang was a joint winner in the field for best newcomer, and an image from Li Yiming achieved "highly commended" status in the "Our Moon" category.

Hungarian photographer Laszlo Francsics won overall top prize and 10,000 pounds ($12,340) for his image Into the Shadow, which showcases the 35 phases of a total lunar eclipse in one photograph.

Competition images are now on display in an exhibition at the National Maritime Museum in London, and will also be published in a book this November.

Wang said she hopes her success will motivate more people in China to take up astronomy photography, as well as take care of the nation's natural environment.

"I am extremely happy to be selected," Wang told China Daily. "Beyond surprise and excitement, it's more a sense of accomplishment after so much hard work."

The winning shots were drawn from a shortlist of 140 images and 4,600 overall entries submitted by amateurs and professionals in 90 countries.

"This year's selection contains so many unique approaches to astrophotography – real love letters to the art form, which stay with you long after you've seen them," said Tom Kerss, who is an astronomer at the Royal Observatory and a judge for the competition.

Dong, Li and Wang were among seven shortlisted Chinese photographers, who all impressed the judges with images of the moon, meteor showers, the Northern Lights and the Milky Way.

Wang claimed 1,500 pounds and top prize in the Skyscapes category for her image Across the Sky of History.

The shot – which was taken in the Gobi Desert inside China's Inner Mongolia Autonomous Region – displays a meteor streaking through the sky above a sparse forest of withered poplar trees.

Wang, who works for a pharmaceutical company in Beijing, said she travelled to the desert with a group of friends in search of meteor showers. The group waited out three days of stormy weather, before the skies cleared to provide pristine conditions for the capture.

"I am glad that we did not give up in the face of challenges and were rewarded in the end, it was the greatest pleasure," Wang said.

Li's photograph Seven-Color Feather of the Moon captured the optical phenomenon known as the lunar corona, and placed third in the category dedicated to the Earth's moon. Judges praised the composition of Li's image, and said the rings of light resemble the colorful brush strokes of a painting.

Dong Shuchang was jointly awarded the Sir Patrick Moore Prize for Best Newcomer, which is named after the noted English amateur astronomer and television presenter. Dong's image Sky and Ground, Stars and Sand depicts a starry sky above the sand dunes in Ningxia Hui Autonomous Region in China.