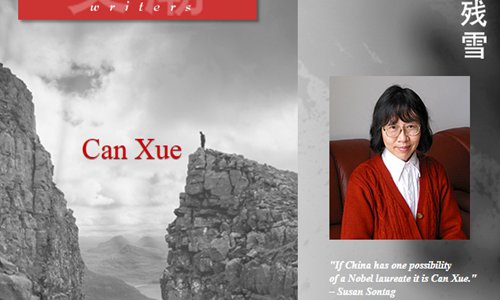 The Swedish Academy has announced the winners of the Nobel Prize for literature of 2018 and 2019 on Thursday local times, although she failed to win the prize, Chinese writer Can Xue has been re-discovered and hotly discussed by domestic readers.
The Nobel Prize in Literature for 2019 was awarded to Austrian author Peter Handke and the prize for 2018 was awarded to Polish author Olga Tokarczuk, according to the prize's official website.
Before the annoucement, the price of the collection of Can's eBooks has reportedly rocketed from 31 yuan ($4.4) to 79,99 yuan ($11.25) on Kindle, with an author introduction of "favorite for the Nobel Prize."
"I am glad to see her worldwide recognition, which shows that Chinese literature is being accepted globally," said a net user.
"I really admire her passion for literature and pursuit of the spiritual world. Her novels are filled with power against darkness and nihilism," Yan Feng, a professor of Chinese literature at Fudan University, said through a Weibo post.
But for most Chinese readers, Can is still unfamiliar.
"I am ashamed that I just heard her name yesterday," said a net user on Sina Weibo, who received many likes.
Can thought she had little chance of winning the prize but the recognition indicates that the prize judges are more open and are now paying attention to niche literature.
"It is surprising and encouraging that they noted me, but I have little chance to win," she said during an interview with Pear Video released on Thursday.
She said that "my novels are always allegorical, rooted in real life, and pointing to the future of idealism."

Can Xue is the pen name of Deng Xiaohua who was born in Central China's Hunan Province in 1953.
As an avant-garde fiction writer, she is best-known mostly outside China, according to CCTV, and her novels are read at world-renowned universities like Harvard and Cornell.
The writer was regarded as a dark horse to win this year's Nobel Prize for literature after she was found among the top three in the odds to win the prize on Monday according to the British website Nicer Odds.
Before that, the writer attracted little attention in China until her nomination for the Man Booker International Prize in March.
"Her novels are hard to read and her writing style is special as well, which might discourage some readers," Chen Xiaozhen, the editor of Can's books at Hunan Literature and Art Publishing House who has worked with the writer for more than a decade, said to Pear Video.
According to Chen, Can's paperback books have sold out, which is unexpected.
Can Xue is one of the most-translated Chinese authors currently, and is fairly popular outside China, Eric Abrahamsen, am American literature critic and founder of the contemporary Chinese literature translation website called Paper Republic, told the Global Times on Sunday.
According to Abrahamsen, the re-discovering of Can Xue shows that authors don't need to write about society or current events to be successful.
"Can Xue is an incredibly personal writer; she represents no one but herself," noted Abrahamsen.
Besides Can Xue, Chinese writer Yang Lian and Yu Hua were nominated for the Nobel Prize this year as well.