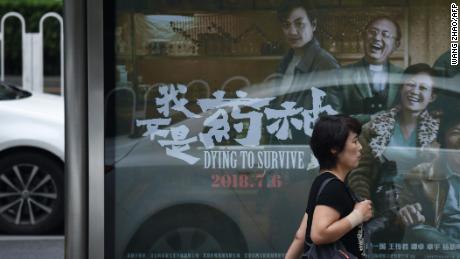 LOS ANGELES, Aug. 9 (Xinhua) -- Chinese dark comedy "Dying to Survive," one of the highest-grossing films in China in 2018, premiered in North America on Friday.

Directed by Wen Muye in his feature film debut and starring Xu Zheng, the poignant and socially-relevant dramedy championed China's box office last summer with a total gross of 3.1 billion yuan (about 450 million U.S. dollars). The film received accolades from the critics and the public.

Based on a true story, the plot is about a reformed con artist who finds himself struggling to smuggle in lower-cost, generic leukemia medicine from India to prevent some Chinese cancer sufferers from dying like flies.

"Dying to Survive" is released in North America by the China Lion Film Distribution in selected theaters with English subtitles and the film's run will continue throughout August in North America.

"We are looking forward to North American audiences discovering this touching and heartwarming film as we open exclusively in Los Angeles and New York, then expanding throughout the United States and Canada," Robert Lundberg, Chief Operating Officer of the China Lion Film Distribution, told Xinhua, adding that theaters will be announced on the company's social media platforms.

Founded in 2010, China Lion, in partnership with Huayi Bros. Media and Bona Film Group, the two top entertainment conglomerates in China, releases more than 15 Chinese-language films each year at theaters throughout Canada, the United States, and Britain.