Classic Hong Kong movies will be screened in six cities across Guangdong province, as well as Beijing and other cities, to mark the 25th anniversary of Hong Kong's return to the motherland. 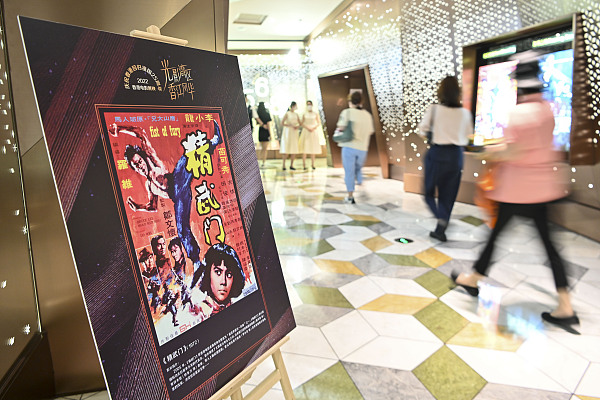 Audience members walk past a vintage poster of Bruce Lee's "Fist of Fury" on their way to the opening of a series of special screenings of classic Hong Kong movies in Guangzhou, Guangdong province. [Photo/VCG]

Victor Tsang Chiu-hok, head of the HKSAR’s government agency Create Hong Kong, said that the exhibited films will present audiences with "a hard-working Hong Kong, a vibrant Hong Kong and a creative Hong Kong." He added, "This is not only a successful practice of the great principle of 'one country, two systems' in Hong Kong, but also generations of Hong Kong people who uphold the Lion Rock spirit and work hard to make such achievements together."

Starting from June 23, the movies are scheduled to be screened for one to two weeks in Guangdong's six cities of Guangzhou, Shenzhen, Foshan, Zhuhai, Dongguan and Zhongshan. While revisiting classic films, organizers hope that the special event triggers nostalgia for Hong Kong films, a unique school in Chinese film history, while boosting the development prospects of more quality films and future exchanges within the Guangdong-Hong Kong-Macao Greater Bay Area.

The integrated development of Guangdong, Hong Kong and Macao is accelerating, and the release of the outline development plan for the Greater Bay Area in 2019 has promoted in-depth exchanges of talent in the region. In recent years, Emperor Entertainment Group has set up its Greater Bay Area headquarters in Guangzhou, attracting more film and television professionals to move to the city; while the Guangdong-Hong Kong co-production "Shock Wave 2" (2020) has become an example of successful cooperation between Guangdong and Hong Kong. Meanwhile, the Hong Kong International Film and TV Market attracts industry enterprises from the Greater Bay Area every year. More cooperation platforms from film bases and screening events to forums are being developed to shape the regional influence and brands of the local film industry in the Greater Bay Area.

"Now we have the Greater Bay Area, I think the future of Guangdong and Hong Kong films is bright,” Hong Kong film producer Bill Kong said. “It also brings more opportunities to those of us who make Cantonese films. Because this market is huge, I think it's a really great thing that will integrate very well."

Wei Junzi, a film historian and director of the documentary "Kungfu Stuntmen" (2020), said that Hong Kong filmmakers have brought their expertise to the mainland, especially in the action movie genre. "I noted in my 'Kungfu Stuntmen' that the hope for Hong Kong action movies lies on the mainland. The rapid development of mainland films and TV series benefits a lot from the professional experience and talent from Hong Kong filmmakers and teams. Generations of filmmakers have inherited the experience and fighting spirit of Hong Kong action films and are making big strides forward." 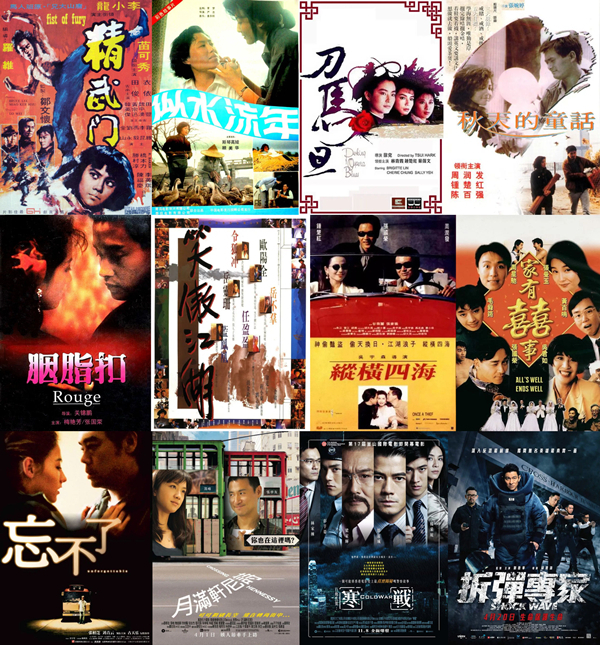 A montage of posters of the classic Hong Kong movies being screened in Guangdong province. [Image courtesy of Hong Kong Film Development Council]

The movie screenings are being co-organized by Guangdong Motion Picture Industry Association, Guangdong Film Association, and Hong Kong Film Development Council. Yim Ho's "Homecoming" (1984) opened the event in Guangzhou on June 23, while more than 60 celebrities, entertainers, actors and screenwriters from Hong Kong, Macao and the Chinese mainland sent their best wishes and messages to the event in an online promotional campaign via pre-recorded videos.

In Beijing, Broadway Cinematheque MOMA in Beijing and the Hong Kong government's Beijing office announced on June 23 that they will join hands again to launch the 10th annual Hong Kong Thematic Film Festival from July 29 to Aug. 7, screening seven newly restored Hong Kong classics to celebrate the anniversary. The films being shown are "The Way of the Dragon" (1972), "Last Hurrah for Chivalry" (1979), "Mr. Canton and Lady Rose" (1989), "An Autumn's Tale" (1987), "All's Well, Ends Well" (1992), "Running Out of Time" (1999) and "Moonlight Express" (1999). As with previous years, after opening in Beijing, the festival will tour other cities around China.

In addition, the China Film Archive also announced on June 27 that it will organize two exhibitions from July to August marking Hong Kong’s anniversary. One will exhibit 10 films by Li Pingqian as a tribute to the Chinese director. Li moved to Hong Kong from Shanghai in 1948 and created nearly 30 movies over a span of 18 years, such as "The Peerless Beauty" (1953) and "Three Charming Smiles" (1964), making great contributions to development of the film industry there. The other exhibition features a series of themed screenings of Hong Kong classics such as "King of Beggars" (1992), "Swordsman" (1990), "Lost in Time" (2003) and "Echoes of the Rainbow" (2010). It is worth nothing that 4K high-definition restored versions of Wong Kar-wai's "Days of Being Wild" (1990) and Tsui Hark's "Green Snake" (1993) will be screened in Beijing for the first time.