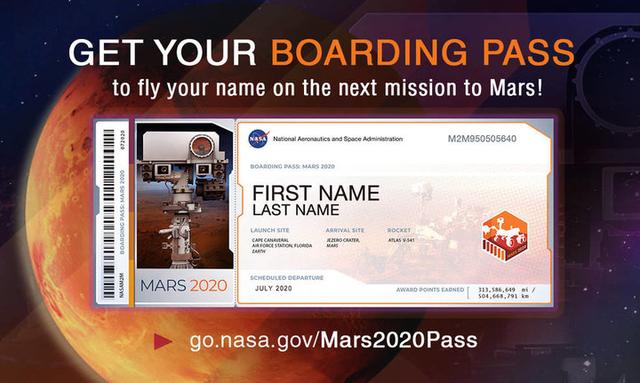 When the US National Aeronautics and Space Administration (NASA) offered the public an opportunity to send their names to the Red Planet with its Mars 2020 rover, more than 5.8 million people signed up in just one week. Using an electron beam, the Microdevices Laboratory at NASA's Jet Propulsion Laboratory (JPL) in Pasadena, California will stencil the submitted names onto a silicon chip with lines of text smaller than one-thousandth the width of a human hair (75 nanometers). At that size, more than 1 million names can be written on a single dime-sized microchip. The chip will ride on the rover under a glass cover, according to the website of NASA. With NASA's Mars 2020 rover entering its final test phase before the spacecraft launch, a Chinese couple has participated in the drive to send their names to Mars. Qi Binying, who is based in Sierra Madre, Southern California, had thought it was just a joke among her friends. When she keyed in her name in the NASA registration system and generated the boarding pass for download, she felt that outer space was right in front of her, according to a report on Chinese language daily World Journal on Saturday.Qi's husband, Robert, an engineer with the California Institute of Technology (Caltech) has also registered his name in the system. Robert said that he had received an official boarding commemorative card and will record approximately 504 million kilometers of flight miles, according to the report. He also works on a research program for NASA searching for the original location of the Earth. The rover is scheduled to launch as early as July 2020, with the spacecraft expected to touch down on Mars in February 2021.Besides this campaign, NASA also rolled out an activity to collect names for NASA's InSight spacecraft on Mars. More than 2.4 million people signed up, of whom 260,000 were from China. The InSight spacecraft touched down safely on Mars on November 26, 2018 kicking off a two-year mission to explore the deep interior of the Red Planet.NASA's Mars 2020 rover represents the initial leg of humanity's first round trip to another planet.