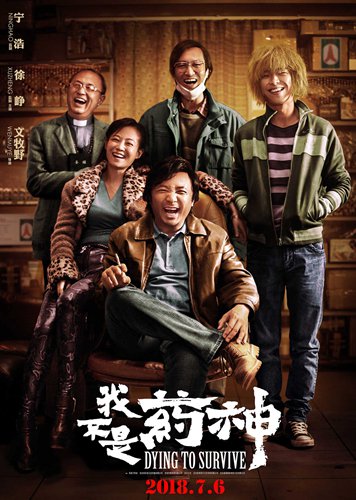 Three years ago, Chinese merchant and leukemia patient Lu Yong was charged with selling "fake" drugs; today, his story has become the basis for a new domestic film that looks ready to win big at the Chinese box office.

The film has also become one of the most discussed topics on Chinese social media, where moviegoers have passionately described the story as a "moving and realistic five-star work" and how they used up "packets of tissues" to wipe away their tears while watching the film.

The film is loosely based on the story of Lu, who has been regarded as a hero of sorts for importing and selling less expensive generic anticancer drugs from India to Chinese mainland chronic myeloid leukemia (CML) patients who couldn't afford the exorbitant licensed drug produced by Swiss pharmaceutical giant Novartis.

Originally a textile merchant based in Wuxi, East China's Jiangsu Province, Lu was diagnosed with CML in 2002 at the age of 34. Paying 23,500 yuan ($3,500) a month for the Novartis-produced Glivec prescribed by the hospital over a period of two years, Lu was driven to the edge of bankruptcy.

As he set about looking for alternative treatments, Lu discovered Veenat, a generic India-produced drug that is almost equivalent to Glivec in terms of dosage, strength and quality.

The drug cost an average of $600 for a month's dosage, a price which later dropped to $30 over the following years, according to a Global Times report in 2015.

Though Veenat and other generic versions of Glivec are approved drugs in India, they are not officially licensed in China and are therefore considered counterfeit drugs.

After trying the medicine himself, Lu shared the information about Veenat with his fellow patients in an instant message group and later helped hundreds of mainland CML patients who couldn't afford Glivec buy the generic version from India, according to the Global Times report.

Lu was charged with promoting counterfeit drugs in 2014 and was arrested in January 2015 for failing to appear in court. Fortunately, more than 1,000 patients whom he sold drugs to petitioned the court for his release and two weeks later prosecutors dropped charges.

While retaining most part of Lu's experiences from 2004 to 2014, Dying to Survive made several major adjustments for "artistic reasons," Wen, the film's director, told reporters at the film's Beijing premiere on Monday.

By portraying the hero Cheng Yong (played by Xu Zheng) not as a leukemia patient but as an adult store owner who starts importing medicine for money before having a change of heart, the film "showcases the profound evolution of an ordinary person," Wen explained.

"I met Mr Lu for the first time when we started filming. He is an ordinary person but possesses a heroic spirit and benevolence that moved us all. I am very proud to be part of this film," said Xu, the film's lead actor and co-producer, at the event.

Lu, who also showed up at the Monday event, admitted that he was not happy about the film's portrayal of the main character at first, but gradually came to understand why the changes were made after talking with the production team.

"It should be noted that I never set out to make money from importing medicine," Lu said.

"China's drug market has undergone dramatic changes since 2015… I was one of first group of CML patients to turn to Indian-produced generic drugs, many fellow patients came to me because, at the time, CML drugs were not covered by our medical insurance system," he said.

But with the inclusion of Novartis' Glivec into a number of provinces and cities' medical care systems, as well as the zero-tax policy for imported anticancer drugs that started in May and the recent release of new Chinese-produced generic drugs, "fewer and fewer CML patients seek me out because more and more of them can afford medicine now," Lu said at the event.

Featuring a social issue that barely any recent Chinese films have touched upon, the film has been applauded by many film critics and moviegoers for its realistic portrayal. This praise has helped push up the film's "want-to-see" votes on Chinese ticketing platform Maoyan to an impressive 145,000.

With this high anticipation and prescreening earnings, some film analysts predict the film may earn 3 billion yuan in total at the box office.

"By tackling a topic about Indian generic medicine, this Chinese film might reach a height parallel to that of the famous Indian social dramas Dangal and Bajrangi Bhaijaan," wrote Sina Weibo user Hualuo Chengshi.

"The first realistic movie to depict a law-breaker of integrity since the establishment of New China… it is not simply a Chinese version of Dallas Buyers Club, but an excellent work destined to shine in China's film market," wrote film blogger Tubin'gen Mujiang on Sina Weibo.