Chinese designers have sprung up in the global fashion arena in recent years, voicing their own design philosophy in an effort to set fashion trends and winning applause from the most fastidious audience. 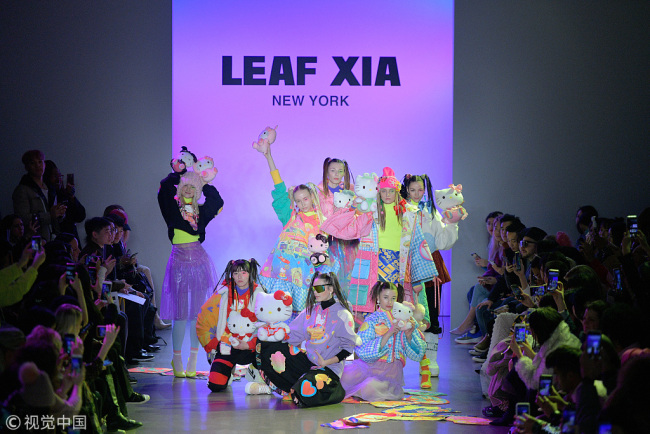 For designers like Leaf Xia, the phenomenon is "something meant to be happening," as China has enjoyed rapid economic and social development in the past decades.

Still in her 20s, the designer already has her namesake brand showcased at fashion weeks in both London and New York.

Xia was among the female Chinese designers who boldly expressed their ideas of female power.

Her latest pieces featured romantic colors and cute styles. Through the looks she wanted to demonstrate that sweetness could also be powerful for women.

"It's a sense of overcoming hardness with softness," said Xia, referring to the ancient Chinese wisdom. "When I was designing this collection, these colors actually gave me a lot of courage."

For Vivienne Hu, powerful women are fearless and confident, just like Alice, the protagonist of Lewis Carroll's renowned novel "Alice's Adventures in Wonderland."

The designs of her latest collection are vibrant and youthful, featuring colorful plaids and floral lace.

For Wang Tao, women can be feminine and powerful at the same time.

Now often hailed as the "queen of the suit," Wang started out her career by making suits for men. When she turned to women's suits, she tried to add details on the waist and sleeves which later became her signature.

The designer often adds a belt or pleated girdle to the suit to emphasize the body curve, and uses slit sleeves and big cuffs to give jackets a feminine touch.

These designers never forget to embrace Chinese culture on their way to the global stage.

Last year, Hu presented a collection that was inspired by the murals of the Dunhuang grottoes, a 1,600-year-old UNESCO World Heritage Site in northwest China.

The designs captured the essence of timeless art through rich amber, indigo, green and cinnabar tones that famously color the walls of the cave, and embraced the synthesis of expertly layered silk garments and distinctly cut knits, with tailored wool outer layers lined with furs.

The looks were praised immediately after they came out and remained her most well-received pieces of designs to date.

Wang never deliberately adds Chinese elements in her designs but Chinese culture is deeply rooted in her style, as it can be seen from the tailoring and the colors she uses.

Silk is Wang's top choice when making jacket linings because Chinese women always focus on the texture of a piece of clothing. The smooth, soft texture is well-received by her customers across the world.

Also for the jacket lining, Wang almost always uses emerald green or magenta, colors that have been popular among Chinese people for a long time.

Xia expected more Chinese designers of the new generation to stand out at global fashion events in the near future.

"We Chinese are born with the desire to excel, and we have a great taste in art owing to the long history and rich culture of our country," she said, adding that a lot of excellent students in globally renowned design schools today are from China.