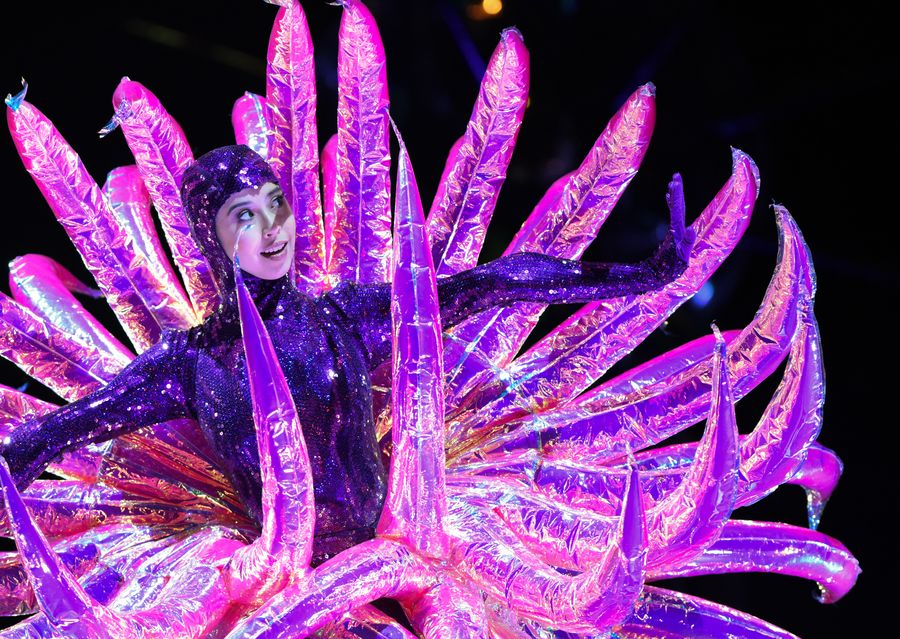 A model presents a creation during a show of the World of Wearable Art, an international design competition, in Wellington, New Zealand, Sept. 26, 2019. (Photo: Xinhua)

The 2019 Awards Competition and Show featured 108 finalist garments by 115 designers from over 20 countries and regions, all vying for the opportunity to win one of 34 awards and a share of more than 180,000 New Zealand dollars (113,328 U.S. dollars) in prizes.

Sun, Miao & Yuan will have the opportunity to spend time behind-the-scenes at Weta Workshop in Wellington, New Zealand.

Huaxia Totem also won the White Section. The judging panel said that Huaxia Totem "was an exceptional example of the use of new technology and we love the way the human body has informed the design."

For three weeks every year, the internationally renowned wearable art competition showcases the finalist entries in a spectacular theatrical show in Wellington.

This year the 115 finalist designers were presented with six design provocations, which subsequently form the six worlds of the stage show.

Dame Suzie Moncrieff, WOW founder and resident judge, said: "Each year we are presented with the most extraordinary garments and each year it gets harder and harder to judge as there are so many outstanding works."

"This year has been no exception. I have been astounded by the wide range of materials used and the intricacy and originality of the designs," she added.