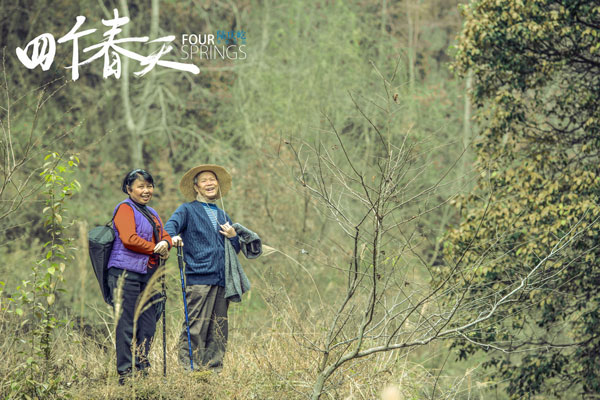 A poster for Four Springs (Photo/Mtime)

Up the Mountain, directed by Zhang Yang, was shown on Saturday, while Four Springs, directed by Lu Qingyi, was shown twice on Sunday at the Heritage Museum of Asian Art in Chicago.

Lu flew over from China to host Q&A sessions and was surrounded by audience members who were struck by the beauty and life presented in the film.

Up the Mountain tells the story of a Chinese artist who moved from Shanghai to a mountain village in Dali, Southwest China's Yunnan province, and how his painting lessons for locals enriched cultural life there.

Through his interaction with the locals, the film portrays the traditions and lifestyle of the Bai ethnic group and the impact of modern China on them.

"I love the film," Sophia Wong Boccio, founder and executive director of Asian Pop-Up Cinema, says. "Every frame of the film is like a beautiful painting."

Boccio says the Asian film festival presented by Asian Pop-Up Cinema is expanding and it is the first time documentary films are included.

John Rohsenow, board director of Chinese-American Museum of Chicago, who attended the screening, says: "I lived in Hangzhou and Dali before. I find the film accurately presented Dali."

Rohsenow says the documentary records the traditional rituals to worship gods, and events like funerals and weddings, which are all very authentic.

"The Bai people's lives and how they are being modernized by the painting master are very real to me." 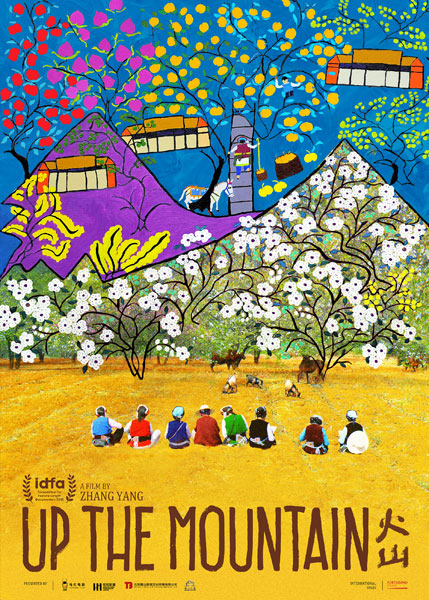 A poster for Up the Mountain (Photo/Mtime)

Film curator Shelly Kraicer, who programs East Asian films for the Vancouver International Film Festival, moderated discussions with the audience after each screening.

Kraicer says Zhang has shifted to realistic and non-Han Chinese films a few years ago and he is "brilliant in doing self-awareness films", and "explores what it means to be Chinese".

If Up the Mountain is a hybrid of a well-documented and constructed film, the impact and strength of Four Springs lie in its raw, personal observation and presentation of the life of Lu's parents and their family.

Lu says he had always admired his parents, their positive attitude toward life and their talent. He documented their life first via still photos and then via video, in an effort to pay tribute to them. And it was only much later that he thought about putting everything together as a film.

Lu is a self-made filmmaker.

He left home at age 15 and picked up various professions-a painter, a bar singer, a miner, a paper-maker, a website builder and an animator-before combining all the skills he had learned in life to make a film.

"I feel my parents are great and lovely," Lu says. "They've inspired me, and I thought their life story would inspire others as well."

Lu says he wants the audiences to figure out their own takeaway from the film.

"This is a profoundly moving film," says Kraicer. "Its beauty lies in its morals and ethics."

Season Eight of the Asian film festival showcases a total of 16 films from many Asian countries including China, Japan, South Korea, Mongolia, Singapore, Cambodia and Indonesia.

The biennial Asian film festival which began on March 12 runs through April 24.