Chinese eatery in Canada cheered for honest critique of own menu 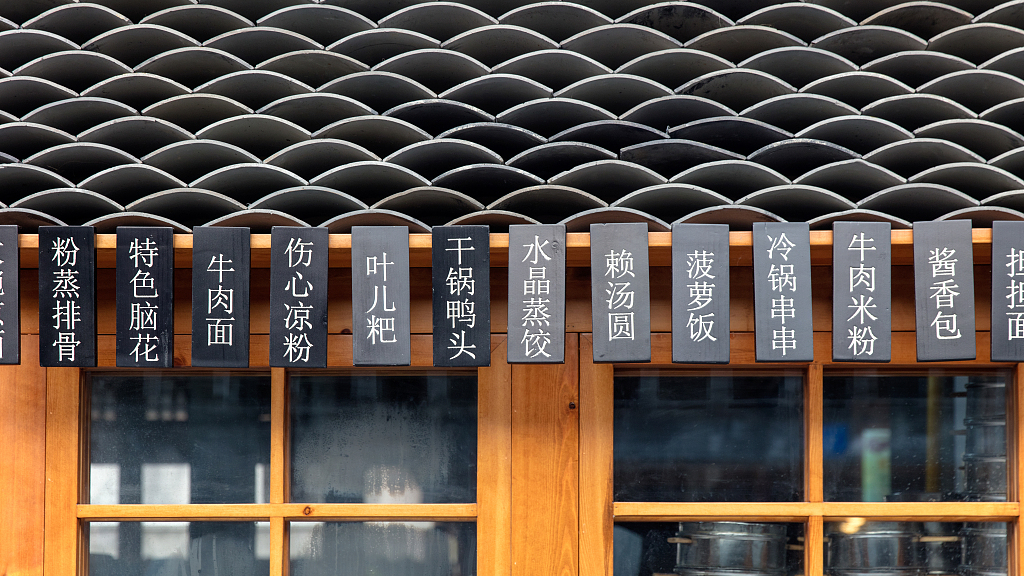 The front of a Chinese restaurant. (Photo: CFP)

A Chinese restaurant in Montreal, Canada, is having a moment under the sun thanks to its owner's very honest review of the food it serves – the great, the good and the just so-so.

Feigang Fei, who established Aunt Dai in 2014, is his eatery's own food critic, giving candid and unfiltered opinions about the menu on the restaurant's website.

When it comes to describing the flavor and characteristics of the items on offer, the Chinese-born restaurateur adheres to a strict policy of honesty, telling it like it is, without sugarcoating or mincing words.

Under every dish on the digital menu, Fei comments on the levels of sweetness, spiciness and greasiness and whether it is recommendable, contains bones or lives up to his personal expectations. He also writes about how different concoctions stack up against each other and how they measure against similar iterations he had growing up in China.

"A lot of people want to be the best, and we are simply not the best. That's a fact. We just try to be a little bit better every day," Fei told CBC Radio, Canada's national public broadcaster.

He began appraising the menu, which features traditional Chinese offerings and Americanized options, a few years back, but the notes only came under the spotlight earlier this week after a tweet by a Montrealer went viral.

"Aunt Dai is my favorite Chinese restaurant in Montreal, but the REAL treat is the menu, featuring extremely honest commentary from the owner," wrote Kim Belair, accompanying her post with screenshots of Fei's write-ups. The tweet has racked up more than 66,000 likes so far.

Fei says giving unbiased feedback on the fare is his way of helping customers make informed decisions as they navigate a menu they're not familiar with.

"It can be tricky to order traditional Chinese dishes in restaurants, so I just didn't want people ordering the wrong food and paying $12 or $15 for it," Fei told food website Eater. He wanted patrons to understand what they're signing up for when they place their order to reduce waste and frustration. 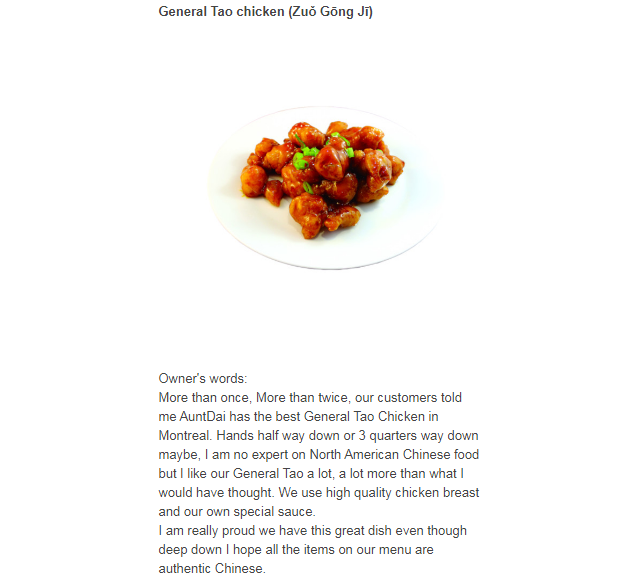 The General Tao chicken is the "best" in Montreal and the owner likes it "a lot more than what I would have thought." 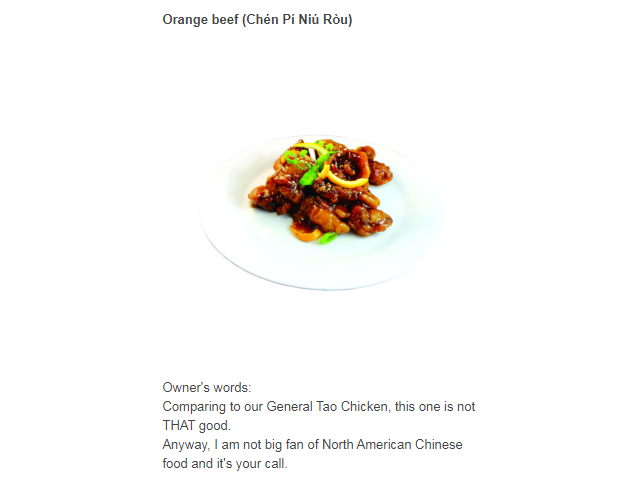 Orange beef? Might want to order General Tao chicken instead. 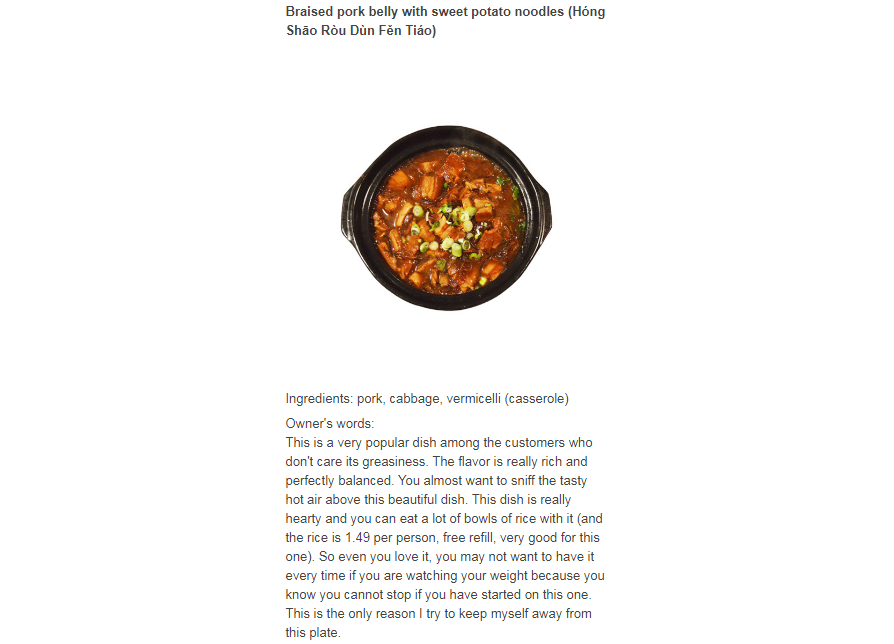 Stay away from the braised pork belly with sweet potato noodles if you're watching your weight because "you know you cannot stop" once you dig in.

The man has assessed all 66 menu items, completing the task last year.

Going over the menu blurbs, it's easy to tell that Fei is serving up a healthy dose of realness. Of Aunt Dai's spring rolls, the man says they're "so good" but admits the portion is small. The spicy shrimps which aren't very spicy ("Don't be fooled by the name," he assures) are also undersized because "big shrimp is very expensive."

Fei takes pride in a number of menu items, guaranteeing that "you won't get disappointed" with the seafood and tofu wok and promising the seaweed salad to be "full of flavors and totally worth it." He also swears by the lamb hot pot ("the most successful" plate at the restaurant) and the twice-cooked pork, which he calls "one of my favorites."

But other specials come with a disclaimer: proceed at your own risk – like the vermicelli salad. Fei warns that "some adventurous customers may leave the plate full because of the weird texture." The dry pot pork intestine is "kind of too dry," while the orange beef is "not THAT good" compared to their General Tao chicken, which Fei is "really proud" of.

Fei, who lived in China before moving to Canada, makes it a point to distinguish between plates that he perceives as authentic and others that have been tweaked to please the non-Chinese palate. "[Having been] born in China, most times I prefer real authentic Chinese food over the North American version," he writes under the wontons with peanut butter sauce, which he confesses to being addicted to despite their novelty.

But there's one dish at the restaurant that has failed to get Fei's seal of approval: the sweet and spicy pork strips. "I am not a huge fan of our version to be honest," he writes in the description. But that's for purely personal reasons. Fei fell in love with Beijing restaurants' take on this popular dish while at university, and Aunt Dai's chef couldn't replicate the exact same experience. "But don't get me wrong, the plate at our restaurant is very tasty too," he promises.

The restaurant has seen a boost in orders after word got out about Fei's unorthodox method to unpacking his menu. But the man hopes the hype doesn't lead to swelling exceptions.

"I don't want people thinking, 'Oh, a lot of people are talking about this restaurant, so it must be very good,' and then they come here and think it's just average," he told Eater.

"I don't want to oversell it."