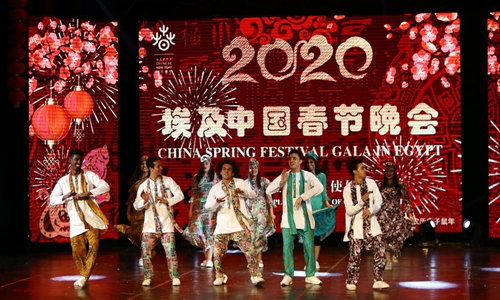 The main gate of a downtown theatre belonging to Cairo Opera House was crowded with visitors who strived to get in and watch the Chinese and Egyptian folklore performances presented during an evening gala held on Thursday to mark the 2020 Chinese Spring Festival, also known as the Chinese New Year.

In the entrance of the theatre that leads to the over 600-seat main hall, the human-size digits 2020 were standing in red and surrounded by a line of flickering LED lights.

About 20 Chinese and Egyptian shows were performed on the large stage with its background monitor and hanging Chinese-style red lanterns, including traditional dances and songs, a Chinese-Egyptian duet, a martial art show, a performance of Egyptian children, an Operatic song, a magic show and others.

Wang Xiaolei, a Chinese dancer from Xiamen who performed a Uygur dance during the gala, said that she was extremely happy and impressed by the warm welcome she received from the Egyptian audience.

"I have just watched a folklore dance by Egyptian artists and I admired them so much for preserving and being proud of their traditional art," she added.

The event was held by the Chinese Cultural Center in Cairo (CCC) and attended by Chinese Ambassador to Egypt Liao Liqiang, CCC chief and Cultural Counselor of the Chinese Embassy in Egypt Shi Yuewen, as well as other Chinese and Egyptian diplomats, public figures, businesspeople and university professors.

"We would like to seize this opportunity to extend our best wishes to the Chinese government and people on this happy occasion, for the Spring Festival is the largest holiday in China," said Hassan Ragab, dean of the Faculty of Language and head of Confucius Institute at Egypt's Suez Canal University.

For her part, Rehab Mahmoud, director of Confucius Institute at Cairo University, said that such activities are important for boosting Egyptian-Chinese cultural interaction.

She noted that the number of Egyptian learners of Chinese language has significantly increased over the past decade thanks to the growing knowledge about China through such cultural events.

Among the troupes that took part in the festivity is that of Ain Shams University, which performed an Egyptian Tannura dance and two other performances of Andalusian and African styles amid cheers and applause of the audience.

"Our participation in these activities brings us closer to the Chinese people and their culture and provides a chance to exchange knowledge about Chinese and Egyptian traditional arts," said Hassan Shehata, the troupe designer and leader.

Shehata pointed out that his team performed once in China in the presence of the Egyptian and Chinese leaders during the Forum on China-Africa Cooperation (FOCAC) held in Beijing in 2018.

The 2020 Chinese Spring Festival marks the beginning of the Year of the Rat, which is the first in the 12-year cycle of the Chinese zodiac.

Audience of different ages in the full theatre expressed happiness and admiration of the shows and appreciation of the growing ties of friendship between the Egyptian and the Chinese peoples.

"The shows are wonderful and everything is beautiful in this festivity tonight," said Gihan Ahmed, an Egyptian housewife who attended the gala with her Chinese-speaking daughter who studied Chinese at an Egyptian university.

The Egyptian lady hailed the Chinese organization of such events. "China is an amazing country and such activities let us know more about the Chinese culture and art," she told Xinhua.