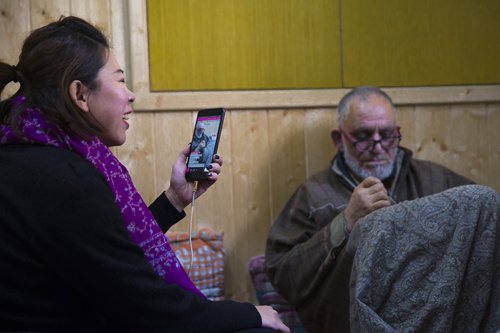 Around dusk in Indian-controlled Kashmir, Chinese businesswoman Li Yilin arranges her mobile phone on a specially designed tripod at a scarf maker's home in preparation of her daily stream that introduces her Chinese clients to the region's 1,000-year-old craft of scarf-making.A registered seller on Taobao Global - a division of Alibaba's e-commerce platform Taobao that focuses on overseas products - Li is among the first group of Kashmir-based Chinese sellers to start using live streaming to help revive handcrafted cashmere wool scarves in her home market.With prices ranging from 30,000 ($4,753) to 100,000 yuan in boutique shops in China, handcrafted cashmere wool scarves with their traditional flowery patterns were once major luxury goods traded on the ancient Silk Road. Today, they remain among the most popular luxury accessories around the world.By working out of the place where cashmere scarves are produced, Li, better known as Da Yao to her clients, is able to sell scarves at a better price for the same quality. The problem she ran into was that it was difficult to show off the quality of these scarves to clients through still pictures. "Now with the help of live streaming, clients can see for themselves how these products are made," Li told the Global Times. Li's marketing idea has proven successful. One of her hours-long steams on Taobao in mid-January garnered more than 33,000 views and orders of more than 30 scarves costing 5,000 to 10,000 yuan each.New sales channelDuring the stream, craftsmen busily work as they ask viewers through a translator what they think of their scarf designs, while thousands of kilometers away Chinese consumers on the other side of the camera sit at home passionately ask questions through chat that Li and the craftsmen do their best to answer.If a viewer starts thinking about buying one of the scarves, perhaps the one they are watching being made, several clicks of their mouse will help seal the deal."The cashmere workers were very curious about this new way of digital marketing and they told me they were surprised to see their products get exported to another country this way," Li told the Global Times.Li tried live streaming in late 2016 when she first started her scarf business in Kashmir, this was also around the time when streaming was beginning to take off in China. According to a report released by the Beijing-based Internet consulting company Entbrains, in 2017 more than 800 online shops in China took to live streaming as a means to boost their sales. Increased sales figures show that streaming brought in as much as 100 million yuan over a six month period on just one of these e-commerce platforms.Among the more than 20,000 scarves that Li has sold on Taobao, about 30 percent were handmade cashmere scarves - a number that can hardly be matched by traditional sales channels."I never imagined that one day I would be able to sell my scarves by just sitting at home in front of a camera," Gulam Hassan Bhat, a 75-year-old master scarf maker from Kashmir, told Li."I'm wondering how the scarves look on Chinese consumers… Could they show us?" Baht asked viewers in Kashmiri with a smile during one stream.Already comfortable being in front of the camera, the aged master is something of a celebrity when it comes to Li's streams. "Bhat loves interacting with Chinese viewers and he's definitely one of their favorites," Li said.Usually streams from craftsmen's homes are not that long since "they are often so anxious to see what Chinese viewers are saying about their products that they can't focus on their work."Preserving traditionFor Li, streaming the scarf-making process is not just a business decision, but also a way to help preserve local traditional craftsmanship by introducing it to more people.For instance, it can take up to two whole years to make a Kani, a type of cashmere scarf woven from the wool of a local-bred antelope. The more complicated the design is, the longer it can take.However, the 1,000-year-old skill is now facing extinction due to a lack of people willing to carry on the legacy.Li said most of the local scarf makers that she has met are already in their 40s and 50s and that local craftsmen told her that only a few young people in the region today are willing to learn the skill due to its sheer complexity and low pay."Sitting at the bottom of the pyramid, local scarf makers are often the one who carry the most workload while getting the lowest pay," said Li, who began contributing a part of her online shop's revenues to local scarf makers starting from 2017. "Many of them are not doing this job just to earn a living - you can see they really love it."Doing business in Kashmir, home to breathtaking lakes and snow-capped peaks but long subjected to conflict over the past six decades, is not an easy, or safe, task."We seldom go out since it is not safe outside on the street and there have been times when our car was stopped by local lndian policemen who asked to check our camera," Li recalled."But the place is so stunningly beautiful and people here are so nice… the place would be a great tourist attraction if there was no conflict."