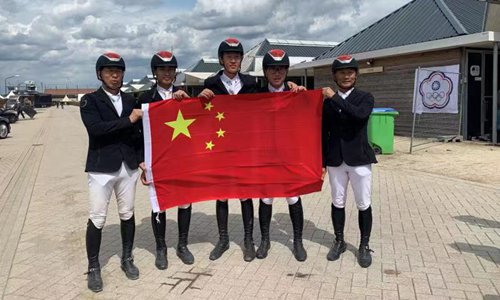 Chinese show jumpers pose for a photo with the Chinese national flag after finishing second at the Olympic Group G qualifier in Valkenswaard, the Netherlands, on Tuesday. (Photo: Courtesy of Chinese Equestrian Association)

The Chinese equestrian team won the qualifier for the 2020 Tokyo Olympic Games after finishing second at the Olympic Group G qualifier in Valkenswaard, the Netherlands, on Tuesday.

Six teams, including Chinese Hong Kong, Chinese Taipei, New Zealand, the Republic of Korea, and the Philippines, participated in the competition. Chinese show jumpers rounded up their score to 47 faults for second place behind New Zealand.

The qualifier was divided into groups according to geographic location. Group G includes countries and regions from East Asia, South Asia, Southeast Asia and Oceania.

As the host country, the Japanese team automatically qualifies. The Australian team also qualified because it had previously finished in the top six in the 2018 FEI World Equestrian Games. Therefore, the final qualifiers for the 2020 Tokyo Olympic Games Group G are teams from China, Japan, Australia, and New Zealand.