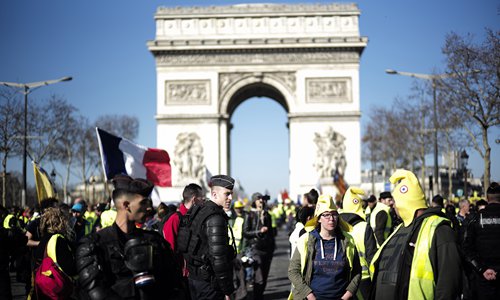 Chinese experts on Saturday expressed divergent thoughts on the notion of populism, the rise of which is seen as a great challenge to globalization across the world, at the Global Times annual forum in Beijing.

Fang Ning, a research fellow of the Institute of Political Science with the Chinese Academy of Social Sciences, stated three prominent characteristics of populism, namely  anti-establishment, anti-elite, and extremism, noting  that the definition of populism is very vague.

"Some think it's a trend of thought, some say it's a kind of emotion and sometimes it turns into a social movement," said Fang.

The rise of the East and the decline of the West, which led to jobs cuts and decline of welfares in the West, is the cause of today's chaos in the Western world, noted Cao Jinqing, a professor from East China University of Science and Technology, although he said it is unclear if it should be defined as populism.

Wang Hui, a professor from the Department of Chinese Language and Literature, Tsinghua University, said the high degree of uncertainties the world is facing now is the fundamental cause of the current social crisis, which forms the foundation of populism.

"Populism cannot be defined as good or bad with simple words. It can be both positive and negative, and this should be the precondition for our analysis on relations between populism and globalization," Wang said.

Historian Xiao Gongqin from Shanghai Normal University said at the forum the core of populism is that a majority of people decide the destiny of a country.

But he questioned if the majority can always represent the truth, adding that the public is always laded with emotions and subject to temporary interests.

"Populism, if it goes extreme, can turn into violence and even 'color revolutions,'" said Huang.

Zhang Yiwu, a Peking University professor of literature, believes that the prevailing populism is prompted by the middle-class, who used to be the stabilizer of political structure, and the entire world has to bear the wide-ranging impact of the middle-class' dissatisfaction.

Many experts at the forum singled out the US for the spread of populism.

The fact that socialism is being applauded by the new generations of the US reflects that the new elites and quasi-elites among populists want to eliminate the current functioning model of the existing elites, said Ren Jiantao, a Tsinghua University professor.

If US President Donald Trump wins the 2020 election, it implies  that the anti-globalization forces in US society are still rising, Huang from Fudan said.

China, in stark contrast to the US, has been a strong supporter of globalization, while experts believe that China faces challenges ahead in its pursuit of globalization.

"China attaches great importance to the attributes of sovereignty and culture, something that globalization under neoliberalism ignores. But we need to make our voices louder and heard, especially among the developing countries, and that's our challenge", said Wang Hui, a professor from Tsinghua University.

China has now evolved into a phase of overcapacity, excessive labor, and overcapitalization and the China-proposed Belt and Road Initiative provides a new approach to globalization, enabling China and other developing as well as underdeveloped countries to forge win-win cooperation, said Xiao from Shanghai Normal University.

Ren,  the Tsinghua University professor, suggested that globalization should provide more care to the vulnerable, be it the poor people in China or the international society.

"Only in this way can China's globalization garner more support," said Ren.