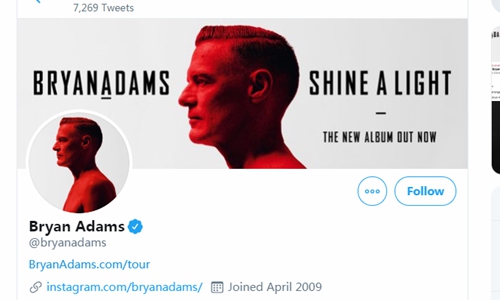 Canadian rock veteran Byran Adams' move to blame "bat eating" people and wet markets has disappointed his Asian fans who felt they were being targeted, with some saying that at a sensitive moment in fighting the pandemic, a celebrity's irresponsible attacks could cause unnecessary hurt.

Adams apologized on his Instagram account on Tuesday, saying that he had no excuse but "just wanted to have a rant about the horrible animal cruelty in these wet markets being the possible source of the virus, and promote veganism."

"As a celebrity, his words could be influential, which could lead to hurt among Asian communities," a fan of Adams in China who preferred to be called Shuaijiaoya told the Global Times on Wednesday. "Though I do not believe he wanted to express racism, he should be responsible for what his words caused."

"Some forces in the West are trying to blame everything about the pandemic on China… Adams might have opened his mouth without knowing the facts," said Dou Zi, a Chinese living in Australia. "To me, it looks like he is blaming China in every word."

Adams was criticized for being racist after he blamed "bat eating, wet market animal selling, virus making greedy bastards" for the novel coronavirus on Instagram on Monday, with a video of him saying "Cuts like a knife."

Reactions to Adams were mixed. Many netizens said they don't accept his apology. Under the Tuesday post, some Asian users said that they were offended, but some also showed support to Adams and even blamed China.

Adams, 60, is known in China for his ballad classic Everything I do (I do it for you)  and Here I Am, the theme song for the 2002 Disney film Spirit.

During a routine  press conference on April 27, Chinese Foreign Ministry spokesperson Geng Shuang emphasized that China was the first country that reported the outbreak, but that doesn't mean China is where the virus originated. The question of the virus' origin is a scientific question, and it should be dealt with by scientists and professionals.