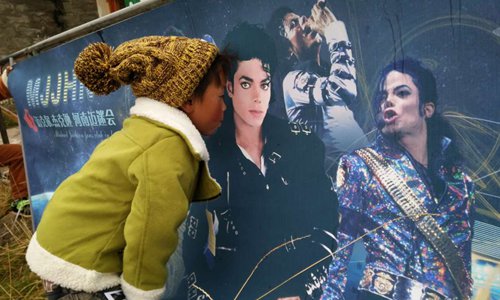 A 1.8 meter-tall bronze statue of late pop star Michael Jackson, dressed like a solider with bandoliers strapped across his chest, was revealed in Zhengzhou, the capital city of Central China's Henan Province, on Saturday.

The statue, modeled after the one that appeared on the idol's 1995 album History, was installed in front of a shopping mall by the superstar's Chinese fans to commemorate the 10th anniversary of his death, which falls on June 25.

Although Jackson never performed in the Chinese mainland, his fame as the "King of Pop" remains strong to this day. In the build up to the 10th anniversary of his death, Chinese fans have been doing their all to show their love for the idol, erecting statues, holding memorial activities and taking part in events with fans around the globe.

According to Chinese music critic Guo Zhikai, Chinese music lovers took notice of Jackson during the late 1980s, with his popularity escalating during the early 1990s when Chinese rock'n'roll and pop music began marching toward their heyday under the country's reform and opening-up policy.

"Jackson's music was so shocking to Chinese audiences at that time because their cultural life was barren. It's like when you order a bowl of rice but are unexpectedly given a formal banquet," Yu Xinyao, a 30-something Jackson fan and a music industry professional, told the Global Times.

As one of the first Western musicians to be introduced to the Chinese mainland after the reform and opening-up, Jackson holds an incomparable position and reputation. An icon and pace-setter in music, dance and fashion, his music and moves were incredibly popular in Chinese discos and night clubs at the time.

Qi Qiang, 32, is the leader of the Michael Jackson Henan Fan Club, the group behind the statue installation. Speaking to the Global Times, Qi noted he was born in 1987, the year Jackson released his album Bad, and after that he became a fan at the age of 8.

"I remember when I was a boy you could earn a lot of cred if you could mimic of few of his dance moves," Qi said. He noted that he often went to his classmates' homes to watch VCDs of Jackson's music videos and share cassette tapes. He also recalled the excitement and fear that accompanied him as he walked home after watching the dreadful scenes in the music video for "Thriller."

"I started as an admirer, then turned into a devoted fan before finally becoming a close friend who understands his life," said Yu, adding he does not believe some of the accusations about sexual abuse that have been made against the star.

"His resonating and beautiful works have to reflect a gentle soul - so colorful, bright, kind and sincere," Qi told the Global Times.

After the reveal of the statue, a concert titled Soul of Love was held in Zhengzhou later that day to pay tribute to Jackson. According to the event organizers, roughly 530 fans from all across China attended.

This was not the only event that has been held recently. Fan clubs throughout China have been holding their own memorial concerts and activities. For example, 21 year-old Hai Yan, an amateur singer, practiced with Jackson's Shanghai fan club for over two months to get ready for the huge All for Love 10th anniversary concert held at the city's Pearl Theatre Saturday.

During the concert Hai sang Jackson's "Earth Song" while Chinese Jackson impersonator Zanghaizi danced on stage. In a recreation of a moment from Jackson's History world tour, a soldier took to the stage and pointed a gun at the performers and audience, but took down his weapon after a young girl comes on stage and gives him a sunflower.

For many fans Jackson is a symbol of humanitarianism, peace and love who has inspired them to perform their own good deeds. Qi noted that his club often helps children in several impoverished and remote schools in Henan and the Southwest China provinces of Guizhou and Sichuan by sending them books and daily necessities like clothing.

Around 60 Chinese fans are planning to head to Los Angeles in the US to join fans from around the globe for a major commemorative event on June 25. The trip is being organized by the Michael Jackson Chinese Fan Club. According to club president Zhang Rui, the club has also raised $12,000 to purchase flowers for his grave.

According to Yu, although the star has been gone for a decade now, his love for star is rekindled whenever Yu listens to his music or takes part in an event.

"It feels like an old friend who you haven't met with for a long time. But once you encounter each other again, you smile at each other," noted Yu.