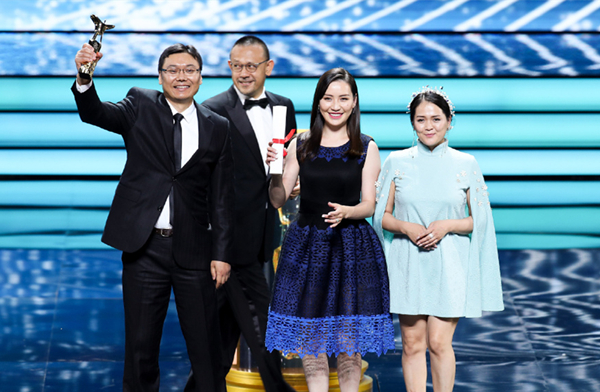 Director Batbayar Chogsom holds the Best Picture award for his film "Out of Paradise" at the Golden Goblet Awards ceremony, held in Shanghai on June 24, 2018. (Photo/ China.org.cn)

The 21st Shanghai International Film Festival closed on Sunday night in Shanghai with the ceremony for the festival's most prestigious competition, the Golden Goblet Awards. Among this year's winners were the Swiss-Mongolian co-production "Out of Paradise," which won best feature, and the Chinese film "Ala Changso," which was awarded the jury grand prix.

Directed by Batbayar Chogsom, "Out of Paradise" tells the story of a young couple from the steppes who must seek out a caesarean they can't afford to pay for as they await the birth of their first child. The jury, led by Chinese filmmaker Jiang Wen, praised the film as being "simple but not crude, sincere and poetic." 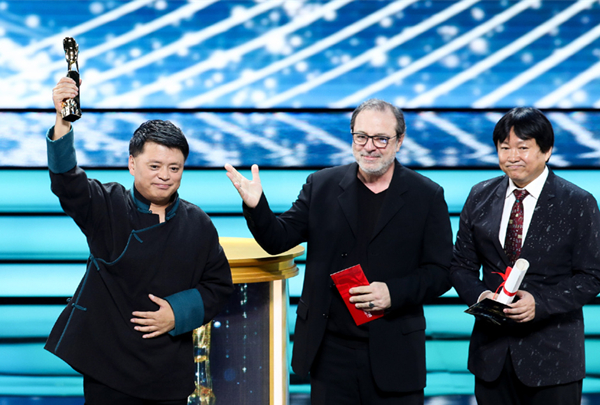 Meanwhile, the Chinese film "Ala Changso" won two awards – the jury grand prix and best screenplay, shared by Tashi Dawa and Sonthar Gyal. "Ala Changso" refers to a Tibetan folk song title which means "cheers and have this good wine." The film depicts a pilgrimage.

"I especially want to thank the Tibetan land for giving me so many inspirations, " director Sonthar Gyal said in his acceptance speech.

Rodrigo Barriuso and Sebastian Barriuso shared the best director award for "A Translator" (Cuba/Canada), while best actor and best actress went to American Tye Sheridan for his role in "Friday's Child" and Canadian Isabelle Blais for her performance in "Tadoussac."

The competition sections for the Golden Goblet Awards fall into four categories, which include the feature-length films, as well as specialized documentary, animation and short film sections. The awards ceremony attracted filmmakers from around the world. According to the organizing committee, a total of 3,447 films from 108 countries and regions were submitted to the festival, among which 13 titles were eventually shortlisted to be voted on by the jury in the award finals. 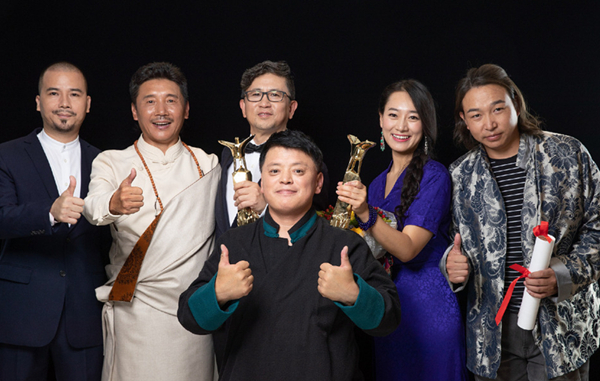 Director Sonthar Gyal and his cast and crew pose with their jury grand prix and best screenplay awards for "Ala Changso" following the Golden Goblet Awards ceremony, held in Shanghai on June 24, 2018. (Photo/ China.org.cn)

The Shanghai International Film Festival will continue one more day, through June 25. A total of 492 films have been featured at the festival, including top titles such as James Cameron's "Avatar" and Hirokazu Kore-eda's latest Palme d'Or-winning "Shoplifters." A total of 468,178 tickets were sold, and the number of screenings tallied 1,621 throughout the festival, most of which sold out.