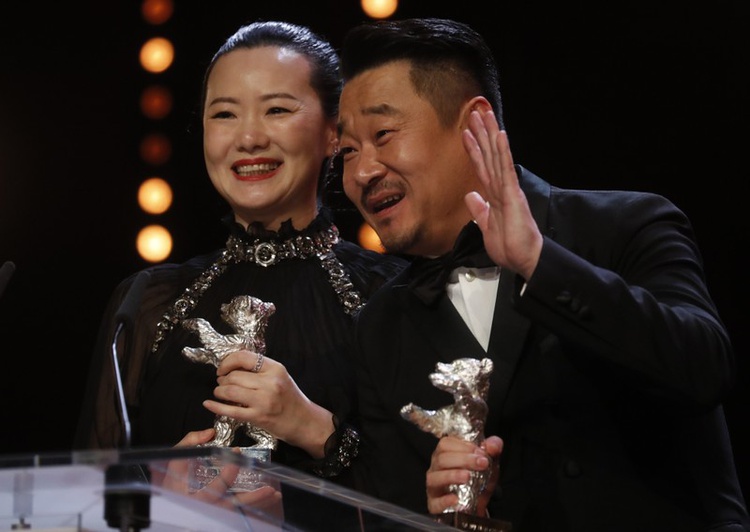 The cast from the movie 'So Long, My Son' arrive for the Closing and Awards Ceremony during the 69th annual Berlin Film Festival, in Berlin, Germany, 16 February 2019.(Photo: Agency)

BERLIN, Feb. 16 -- Chinese actor Wang Jingchun and actress Yong Mei won the Silver Bears for Best Actor and Best Actress for their performances in the film "So Long, My Son" at the 69th Berlin International Film Festival (Berlinale) on Saturday.

"So Long, My Son", directed by Wang Xiaoshuai, is a family saga spanning 30 years. The story of one family dealing with the loss of their son, as masterfully brought to life by the lead actor and actress, Wang Jingchun and Yong Mei, has moved many viewers to tears at Berlinale.

"Synonyms", co-produced by France, Israel and Germany, has won the Golden Bear for Best Film. A work of Israeli director Nadav Lapid, the film follows a young Israeli who moves to France to start a new life and search for identity.

German director Angela Schanelec has won the Silver Bear award for Best Director for her film "I Was At Home, But".

A total of 23 films worldwide were selected for this year's competition section, among which 16 competed for the coveted Golden Bear and Silver Bears. A jury led by French actress and Academy Award winner Juliette Binoche had the final say on the winners.

This year, the Berlin International Film Festival runs from Feb. 7 to Feb. 17.