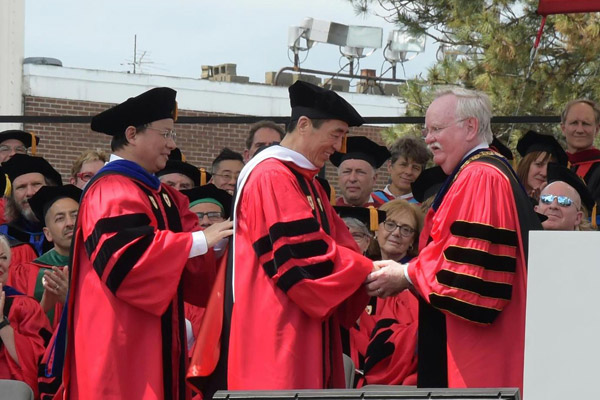 Chinese filmmaker Zhang Yimou (front C) attends the 2018 commencement of Boston University in Boston, the United States, on May 20, 2018.  [Photo/Xinhua]

Famed Chinese filmmaker Zhang Yimou on Sunday was greeted with cheers and applause of an enthusiastic crowd after he received an honorary Doctor of Humanize Letters from the Boston University at its 145th Commencement.

Zhang Yimou's films "offer not only a perspective on the people and culture of China, but also a window into the universal qualities of human nature and yearning," he told about 7,000 graduating students and their parents.

"The opening and closing of the 2008 Beijing games left the world in awe at their unparalleled beauty and magnificence. Earlier this year, you dazzled once again with the Winter Olympics handover ceremony," he continued.

"Boston University is proud to confer upon you (Zhang Yimou) the degree Doctor of Humane Letters, honoris causa", the university president announced amid students' big and warm hail and applause. 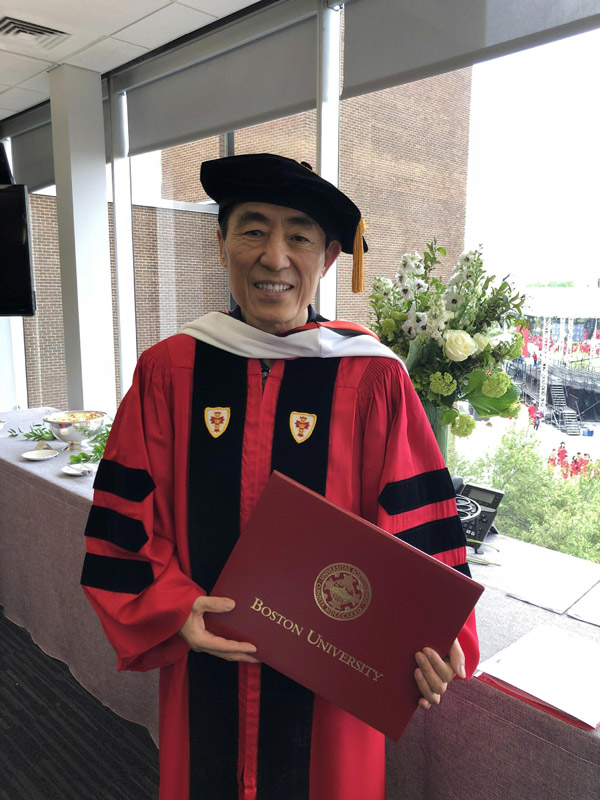 Chinese filmmaker Zhang Yimou (front C) attends the 2018 commencement of Boston University in Boston, the United States, on May 20, 2018.  [Photo/Xinhua]

"I'm honored. This is a recognition of my work and creation personally, and moreover, it demonstrates the big influence of films which can be seen as the visiting card of a country," the world famous director told Xinhua on Sunday.

Zhang Yimou is one of China's leading directors in the movie industry. His films, which include Raise the Red Lantern, House of Flying Daggers, and The Great Wall, have won prizes at the Cannes Film Festival, the Venice Film Festival, and the Berlin International Film Festival, and six of his films have been nominated for Academy Awards, according to an introduction posted on the Boston University's website.

More recently, Zhang directed the Beijing portion of the handover ceremony at the close of the 2018 Winter Olympics in PyeongChang, South Korea.