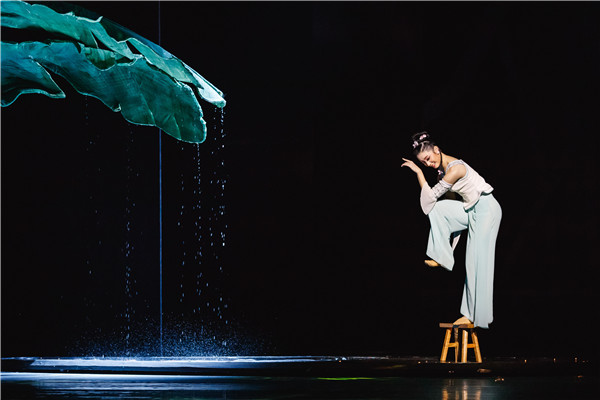 Among the myths and legends of the Zhuang ethnic group, Liu Sanjie, a folk singer known as the "Song Fairy", is perhaps one of their most iconic figures. With her songs, it is said, she gives a voice to the impoverished and people who suffer from inequality as she sings about her yearning for love.

Stories about the Song Fairy have many versions and have been adapted into various productions for stage and cinema, one of the most renowned being the 1960 film, Liu Sanjie, which left China with several timeless folk songs.

To celebrate the 70th anniversary of the founding of the People's Republic of China, an eponymous dance drama launches a nationwide tour beginning with a production at the Tianqiao Performing Arts Center on May 22.

Roughly based on the plot of the 1960 film, the dance drama tells the story of how Liu Sanjie and the male protagonist, A Niu, fight against oppressive forces, express their love for each other and demonstrate the integrity and courage of the Zhuang people.

Although Liu Sanjie is known for her euphonious singing, the performance uses dance moves to express the characters' emotions and narrate the story, for example, by presenting the romance between Liu and A Niu as a dance duet.

The classic folk songs have also been preserved, as the performance uses the original soundtrack from the film in certain scenes.

As the story is set in the Guangxi Zhuang autonomous region, its choreography includes dance elements unique to the Zhuang ethnic group, such as the frog dance and phoenix hand gesture.

Meanwhile, the show also endeavors to update the retelling of the story by incorporating popular modern dance styles such as street dance and Latin techniques.

"We have integrated these modern dance elements into the foundation of folk dance to appeal to the aesthetics of the younger generation," director Ding Wei says. "It is necessary for young people to value our folk culture in order for our culture to be remembered and inherited." 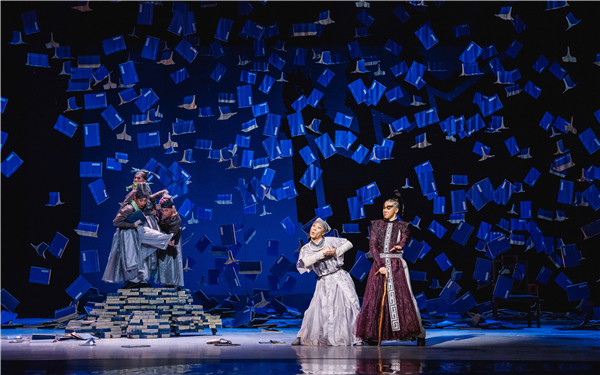 These modern dance styles also make it possible to present the antagonists in a comical way, adding humor to the dance drama.

The portrayal of Liu Sanjie is also built on a modern interpretation. Rather than deifying this role, the show's creators preferred to present a character who is no different to ordinary people.

According to Ding, in this production, Liu is an independent woman who supports herself by picking tea, weaving nets and cutting wood, and, like the youth of today, she longs for love and cannot stand injustice.

The new show's playwright, Feng Shuangbai, says that such a new interpretation is in accordance with the changing era and fits the values of the younger generation.

The protagonist is portrayed by young dancer Wang Qian, who says that she put a lot of effort into researching and presenting the character: "Apart from the director's guidance, I watched the original film repeatedly to imitate the film actor's demeanor and gestures, before later adding my own interpretation.

"Presenting this folk singer only through dance is quite a challenge, so I have to exaggerate and vary my body language and my expressions to convey my emotions to the audience," Wang adds.

Huang Wanqiu, the original actress who portrayed the titular character in the film Liu Sanjie, is working on the production as an artistic consultant, and she acknowledges it as "a treasure of China's dance drama".

"The cast are using their creative dance styles to portray the charm and spirit of Liu Sanjie, and I feel each character is very accurately and vividly presented," Huang says.

Since its debut in Guangxi in September 2018, the dance drama has been performed at the National Center for the Performing Arts in Beijing and the Hong Kong Cultural Centre.

Huang says she is happy that the dance drama is bringing Liu Sanjie and Guangxi folk culture to a bigger stage: "The story of Liu Sanjie has conveyed optimism, truthfulness, compassion and beauty to a lot of people through folk songs. I think she embodies the cultural confidence of Guangxi, and even China."