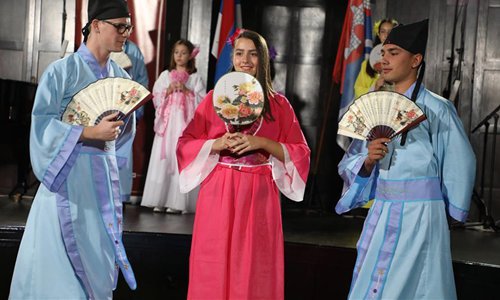 Chinese language education is increasingly sought after by more countries, global representatives told the 2019 International Chinese Language Education Conference on Monday in Changsha, Central China's Hunan Province.
Local demand has been the main driver of Chinese language popularity, based on China's growing international influence and overseas trade, the representatives said.
More than 1,000 delegates from over 160 countries attended the conference in Beijing.
"As China's overall influence has increased and China-Japan relations have improved, Chinese has become the second most spoken foreign language across Japanese campuses in recent years," said Tutaka Furukawa, former vice-president of the International Society for Chinese Teaching, told the Global Times.
By November, 69 countries and regions have officially incorporated Chinese language teaching into their national education systems including the UK, Russia, South Africa, Japan, South Korea, and Australia.
Madagascar will join the list next year, said Andriamamonjy Oniniaina, a Confucius Institute teacher at the University of Antananarivo, Madagascar.
Chinese-speaking talent is in great demand in countries that have joined the Belt and Road Initiative, Andriamamonjy said.
Confucius institutes have attracted many young Africans by integrating Chinese learning with e-commerce, agricultural and IT technologies, Andriamamonjy said.
Combining Chinese language learning with vocational training has become a trend of Confucius institutes in Southeast Asia and African countries, Andriamamonjy told the Global Times.
"The ability to speak Chinese can triple their salaries," she said.
There are reportedly 550 Confucius Institutes and 1,172 Confucius classrooms in 162 countries and regions. About 100 million people are learning Chinese globally.
In 2019, eight countries - Haiti, the Central African Republic, Chad, North Korea, Maldives, East Timor, Saudi Arabia, and Dominica - applied to set up institutes for the first time.