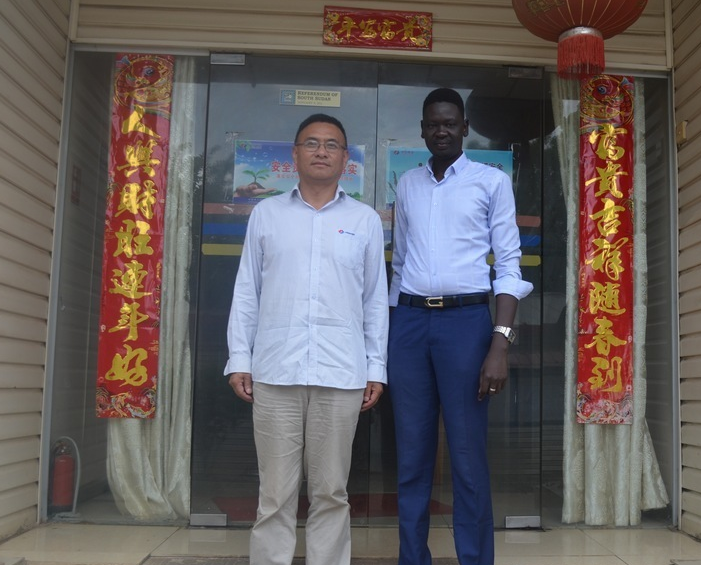 The 25-year-old Mabil together with his family, once fled his home area to Kakuma refugee camp in neighboring Kenya to escape the conflict during the second Sudanese civil war that broke out in 1983 between the Sudanese government and the Sudan People's Liberation Army (SPLA).

He described his tortuous journey to earn an education in Kakuma refugee camp, where his parents struggled to keep him in elementary school.

Mabil now the deputy project manager with PowerChina in South Sudan told Xinhua on Wednesday in Juba, that it was a combination of his hard work in search of menial work and help from his relatives that he managed to complete his high school studies later in Uganda.

"In 2011 when I finished my high school I came back to South Sudan and also struggled because there was no support for my university education. I stayed for two years without university education. So later on I got opportunity in 2013 and went to China's Tianjin University on government scholarship," said Mabil who completed his level four of Chinese Proficiency Test, also known as HSK.

The former refugee studied Mandarin at Tianjin University for eight months which initially started with difficulty but his commitment to learn finally paid off as he excelled with top honors in Chinese language.

"I was under immense pressure because in the same year, we found that the Chinese were trying to evaluate the level of the language to strengthen it. I passed that level successfully and was chosen to continue with my degree in petroleum at Xi'an Shiyou University," he revealed of his four years spent in Shaanxi province.

Armed with a degree in the coveted petroleum field and fluency in Chinese language, Mabil is encouraging more South Sudanese to take up Chinese language lessons to boost their career.

"Chinese language is historical language. It is like something imaginable. This language is very interesting and spoken by a large population around the world," he said.

"The language has helped me a lot in this company. Now I am the deputy project coordinator and I got this right away. When I first came, the position I was given was the health, security and environment engineer of the project," said Mabil.

Mabil is highly regarded by his colleague Ma Liansheng, a senior project manager who recruited him in 2018.

Ma told Xinhua that Mabil has contributed immensely to their work as he helps in translation since he communicates in both local Juba -Arabic and Mandarin.

"When we have problems during work with locals he comes in and solves the problem," he said.

Ma disclosed that PowerChina is hoping to finish by June, the ongoing Juba power distribution system rehabilitation and expansion project, which was funded by the African Development Bank (AfDB).