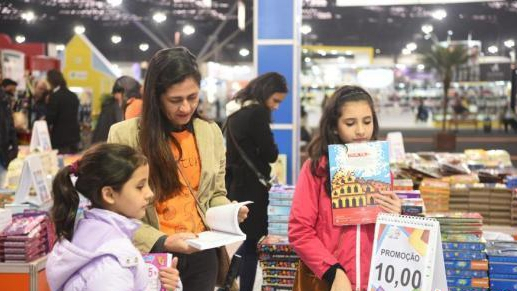 With a stand dedicated to Chinese literature and culture, Sao Paulo kicked off its 25th bi-annual international book fair on Friday.

The fair, which runs until August 12, showcases foreign and Brazilian authors and offers 1,500 hours of cultural activities, debates, seminars and book launches.

The stand that drew the most attention on the opening day was "China Book," where Chinese books were on display.

"The fair can be an opportunity for exchanges between the two countries, to better understand Latin America and Brazil, and for them to understand China's editorial production in general," Yu Yang, head of the Chinese delegation to the fair and editor of the People's Publishing House, told Xinhua.

Books on Chinese culture are in demand since the country's evolution as a global power is feeding a market for books on its political and economic development, he said.

China is Brazil's leading trade partner, and both belong to the BRICS bloc of emerging economies, along with Russia, India and South Africa, which helps to promote literary exchanges, Yu said.

"Being part of BRICS helps Brazil and China, and literature, history and reading, in general, can help countries develop closer ties," Yu added.

A total of eight Chinese publishing houses are exhibiting 200 kinds of books, 50 of which were written in Portuguese and English.

Luis Torelli, president of the Brazilian Book Chamber, said the fair is taking place at a tough time for the publishing industry due to economic uncertainty. And this year's fair features 197 exhibitors, 83 less than those in 2016.

Among the special guests at the event are British author A.J. Finn, whose best-selling "The Woman in the Window" is being adapted into a feature film, and Victoria Aveyard, the US author of the series "Red Queen."