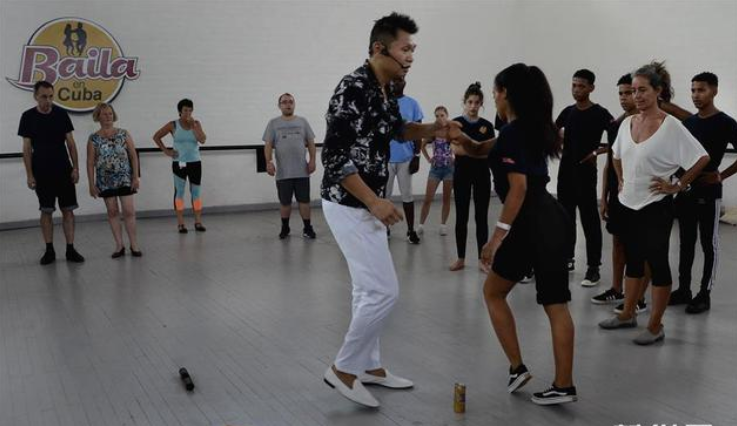 HAVANA, Dec. 15 (Xinhua) -- Chinese-born Huo Yaofei's passion for Latin music has turned him into a dance pro who not only teaches dancing, but also stars in music videos.

Better known as David Huo in Cuba, the birthplace of the traditional salsa dance, the instructor has starred in the music video "From China to Havana," recorded by the well-known Cuban salsa ensemble El Nino y La Verdad.

More recently, he has appeared in another music video, "Esto se baila asi" ("This is how we dance like that"), recorded by popular salsa boy band La Charanga Latina.

Huo said he first "caught the bug" for dancing in 1998, at the age of 21, when he went to a nightclub in Beijing and saw some Latinos dancing.

At the time, he was studying sports medicine in university and decided to take Latin dance as an optional course, starting with the basics.

He soon mastered Cuban-style salsa, called Casino, and on one of his first trips to the Caribbean island in 2005, beat out Cuban competitors to win the top prize on a TV dance contest.

"Cuba is the cradle of salsa dancing, but what people dance here is Casino, a different style from that danced in the United States, Puerto Rico or Colombia," Huo said.

According to dance historians, Casino was born from a combination of Cuban son, cha-cha, mambo and other rhythms.

Huo also teaches in Cuba, where he attended the 13th World Meeting of Casino and Salsa Dancers and Dance Academies in Havana in November.

Mercedes Acuna, a Guatemalan residing in Canada, came to Cuba with her husband and mother-in-law to take classes with Huo.

He is "a true expert in Casino dancing, but also an excellent teacher who helps us feel the music," Acuna told Xinhua.

Huo said, "sometimes the students focus more on techniques than on keeping up with the rhythm, so I try to make them feel and understand the music."

He praised Huo not just for his teaching skills, but for his contribution to cultivating a wider appreciation for Cuba's music culture.