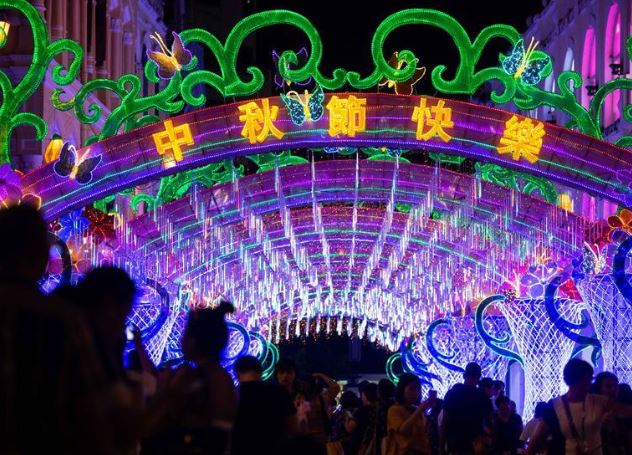 BEIJING, Sept. 13 (Xinhua) -- Five rabbits of different sizes sit around in a circle, surrounding a full moon. This is a set of dough sculptures that has just come out of the oven for the Mid-Autumn Festival.

"I have received many orders for this set of dough sculptures on this year's Mid-Autumn Festival and they are so popular that I have to work extra hours," said Qiu Xia, 40, a dough sculptor in the city of Bayannur, north China's Inner Mongolia Autonomous Region.

The rabbit sculptures are related to the traditional moon worshipping custom. According to Chinese legend, Chang'e, the "Moon Lady" who took a potion and floated into the sky, eventually landing on the Moon, where she became a goddess accompanied by a jade rabbit.

Across China, people have observed the festival with a variety of activities, including performances, poetry recital, calligraphy exhibitions, and music shows, to preserve fine traditional culture and promote virtues such as patriotism and dedication.

In the eastern coastal city of Qingdao, Shandong Province, hundreds of residents, migrant workers and soldiers participated in a one-hour arts performance on Haifeng Square. Residents sang a song which they wrote themselves based on the changes of the city.

"I has the same age as New China. The Mid-Autumn Festival is not only a day of family reunion, but also a day of unity and celebration for the Chinese nation," said 70-year-old Chen Yuezhi.

Chen said she witnessed the country's developments over the past 70 years. "Now, I live a well-off life and wish greater prosperity of the nation."

"The classic songs they sang have awakened my youth memory and aroused patriotism in our hearts," said Sang Guilan, a citizen in Ningyang County, Shandong, after watching a chorus performance.

In Zhengjiazhuang village, southwestern Yunnan Province, it has been a 24-year-old tradition of residents to prepare a grand reunion meal on the Mid-Autumn Festival.

The village has residents of seven ethnic groups, such as Han, Bai, Tibetan and Yi. "We will always keep the good tradition of ethnic unity," said He Guoxiang, Party chief of the village.

In the city of Guangzhou, south China's Guangdong Province, ancient poems centering on the festival were recited, accompanied by traditional music. Lantern riddles were told and residents who solved the riddles queued up to claim their prizes.

"I like this festive atmosphere of traditions and culture," said Li Meihua, a local resident. "Both we elders and young people are gathering together to celebrate the festival and pass down the traditions," Li added.