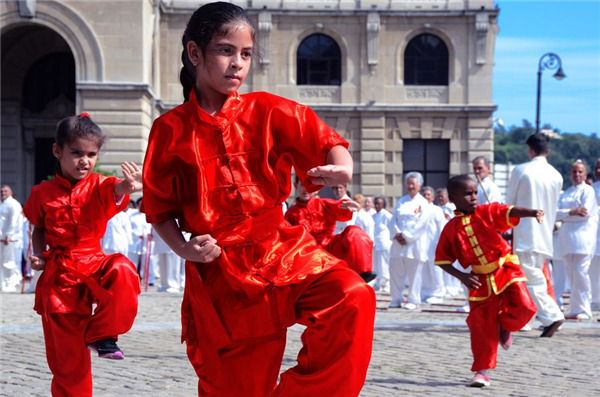 Children participate in an event to celebrate the 22nd Anniversary of the Cuban School of Wushu and Qigong in Havana, Cuba on Oct 22, 2017. (Photos: Xinhua)

Aleida Chavez, 69, is one of thousands of Cubans who practice ancient Chinese martial arts to help them stay in shape and even maintain mental health, especially in times of hardship.

With partial lockdown of Cuba's capital Havana amid the COVID-19 pandemic, Chavez practices her routines more fervently than ever, but instead of attending the Cuban School of Wushu and Qigong in the city's Chinatown, where she has gone for more than seven years, she practices at home.

"Chinese martial arts make me feel not only healthy but relaxed. I forget about the coronavirus and day-to-day problems for a while," Chavez said.

"I am a senior citizen, but feel energetic," she said, adding "I encourage my relatives and close friends to join this exciting world."

Chavez, who lives with her husband and daughter in a small apartment in the La Lisa district on the outskirts of Havana, has adapted her routines to the smaller quarters, since authorities asked residents to stay home and avoid public gatherings in a bid to contain the outbreak.

According to Roberto Vargas Lee, president of the school, with gyms and sports centers closed during the lockdown, more Cubans are turning to the Chinese martial arts.

"Chinese martial arts are never forgotten. They allow people to remain in harmony with nature and take care of their bodies while strengthening their minds," Vargas said. 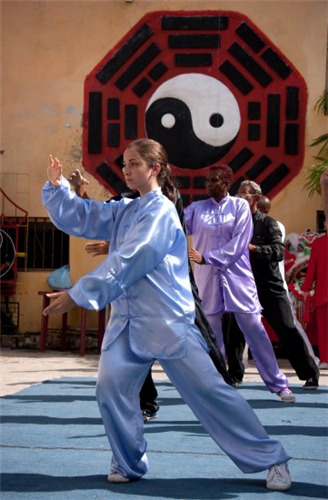 "The world needs the spirit of Chinese martial arts to find balance," he added.

According to history, Chinese martial arts were introduced to Cuba following the arrival of the first Chinese emigrants in 1847, and flourished in the early 20th century.

Now, Chinese martial arts lessons will be aired on Cuban TV, featuring demonstrations by students from the school who were filmed earlier this week by local sports channel Tele Rebelde.

Isis Betancourt, 45, a doctor and news anchor on Cuban TV that specializes in health issues, said audiences will welcome the program.

"Chinese martial arts are more than sports. They are, above all, related to a philosophy of life that has been passed down throughout history," Betancourt said.

As Cubans continue to shelter in place, these broadcasts of Chinese martial arts aim to help residents stay physically and mentally fit, preserving, according to Chavez, the most valuable things we have in life.