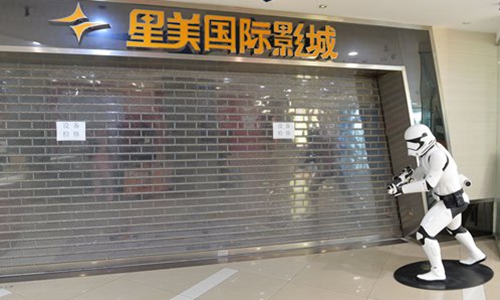 Chinese cinephiles may have to wait longer as no cinemas have yet been reopened despite the State Council giving the green light for work resumption at leisure venues.

Theater and cinema employees reached by the Global Times said on Monday that they have not received any notice about work resumption.

According to the website of China's largest movie ticketing platform, Maoyan, no cinema has been listed as available for screening films.

"The statement was just released by the State Council on Friday and it takes time to be implemented in various provinces and regions," Yang Fabao, dean of Renmin Theater in Northwest China's Xinjiang Uygur Autonomous Region, told the Global Times on Monday.

Xinjiang was one of the earliest places in China to reopen cinemas in early March but they were shut down again following the closure order issued by China Film Administration in late March.

The State Council on Friday stated that entertainment venues such as cinemas are allowed to reopen with measures like pre-booking and crowd control, according to the government website.

Many moviegoers rejoiced at the statement, with some sharing online the movie list that they want to watch the most. The hashtag "The first movie I want to see in the theater" has earned 130 million views on China's twitter-like Sina Weibo as of Monday.

"I cannot wait to rush into the theater to watch the films that I have waited for for such a long time," a Chinese netizen said in a post on Weibo.

According to the Maoyan website, Detective Chinatown 3, The Rescue, and Leap, which were all scheduled for release in January but dropped due to the COVID-19 outbreak, ranked as the top three on the most-want-to-watch list. Imported films that were postponed amid the COVID-19 pandemic including Mulan, Little Women, Marriage Story, and Jojo Rabbit are also on the top 50 list.

But netizens eager to watch new films does not equal real box office potential as many people still have concerns over safety. Since epidemic-control is expected to be long-term, producers may consider innovating in forms of release to make up for box office losses, analysts said.

China Film Administration said on April 29 that the box office loss in China may exceed 30 billion yuan ($4.2 billion) due to the coronavirus. China's box office takings topped 60 billion yuan in 2019, according to reports.