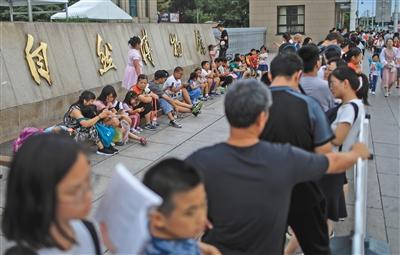 Museums across China are now extending their operation hours to satisfy the country's growing cultural appetite.

According to statistics, at least 50 museums in the country extended their opening hours this summer, including the National Museum of China (NMC) in Beijing, as well as major provincial ones in Shaanxi and Sichuan.

Starting July 28, the NMC extended Sunday opening hours from 5:00 pm to 9:00 pm. On the first night, it received a considerable number of visitors, no less than in the daytime.

Some visitors stayed from sunup to sundown, while others specifically chose to arrive at night.

Wang Qiang, a history-loving data engineer, spent over half a day in the NMC exhibition hall on the first day of the trial. "I could spend all day in this exhibition hall, and the previous opening hours were not always enough for me," he explained.

Apart from providing more benefits for frequent museum-goers, the nighttime operation of museums also creates new places to go at night for ordinary people, many of whom now choose to hit the museums after dinner.

A mother of an elementary school student noted that the extended operation at weekends allows her family more flexibility.

According to Liu Chaoying, President of the Beijing Museums Society, this isn't the first time that Beijing museums have opened at night, as an annual night camp activity has been held for 14 years by the Beijing Museum of Natural History (BMNH).

During the early years of the activity, families set up tents in the museum's dinosaur exhibition hall and slept to the sound of simulated dinosaur roars. Later, the museum launched more specialized programs inspired by the movie Night at the Museum.

"The parents had ordered a place in advance to take their children to the museum, and they had hoped to see something different," said Shi Yingzhou, director of the information center at BMNH.