CULTURE Chinese music festival to be held in Chicago

Chinese music festival to be held in Chicago 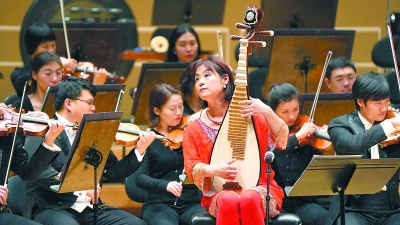 A Chinese music festival featuring China-US friendship will be held at Chicago Symphony Center in downtown Chicago on September 22.

More than 1,000 performers from China and the United States, including top tenor and soprano, choir and dancers in traditional Chinese attire will perform at over 110-year-old Chicago Symphony Center, according to the organizers.

Los Angeles-based soprano Julia Metzler will also perform at the festival. In 2017, she was invited to sing on China Central Television (CCTV) for China"s Lunar New Year Gala, the most widely watched television broadcast in the world.

This is the third time for the city"s Chinese community to hold a Chinese music festival.

On September 16, 2018, more than 30 theater troupes and 1,000 performers from US Midwest and China staged a Chinese concert at Jay Pritzker Pavilion in Millennium Park in downtown Chicago. More than 10,000 people, including Chinese nationals and Americans, watched the performance.