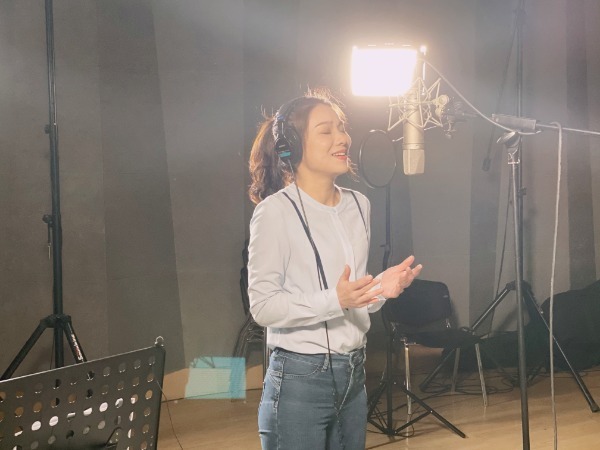 Gui Nan records songs written for people battling COVID-19 in a studio in Beijing in May. (Photo: China Daily)

Earlier this year, Thomas Rabe, the grandson of John Rabe, once called the "Schindler of China", reached out for help from Germany during the COVID-19 outbreak, and many people in Nanjing, Jiangsu province, took immediate action to provide the needed medical supplies.

John Rabe was a businessman from Hamburg. Together with other foreigners, he helped to set up the Nanjing Safety Zone to protect Chinese civilians from Japanese troops during the War of Resistance Against Japanese Aggression (1931-1945).

He kept a diary, in which he recorded Japanese atrocities that he had witnessed in Nanjing from September 1937 to February 1938, including the Nanjing Massacre. His diary provided important historical evidence of the massacre.

When singer and teacher of the Central Academy of Drama, Gui Nan, read the news of Nanjing people offering medical supplies and good wishes to Thomas Rabe and his family, she was touched.

Gui soon initiated the idea of writing a song dedicated to the lasting friendship between people of China and Germany.

She invited Chinese songwriter Liu Chang, her colleague from the Central Academy of Drama, and Viennese conductor Niels Erik Muus, who is also the director of the opera department of Konservatorium Wien Privatuniversitaet der Stadt, to join the songwriting.

The song is performed by Gui in Chinese and German, titled Freundschaft in German and translated into English as "friendship".

The three musicians also collaborated on another song, titled Angels in China, in a tribute to frontline health workers battling the pandemic around the world. Gui has performed the song in two versions, with the Chinese lyrics written by Liu and the English version written by Muus.

"We used different languages to sing, hoping to let more people around the world enjoy the songs,"Gui said.

Due to the outbreak, all her shows were canceled and her courses were moved online.

"Since music is the way musicians communicate with the world, we want to express our gratitude and comfort people," she said.

"Music has provided unity, especially when we are going through such a difficult time. We want to create beauty and joy with the songs."

In her 30s, Gui has been teaching at the opera department of the Central Academy of Drama since 2016. She teaches German vocal performances and German art song appreciation courses.

"I've been working closely with Gui Nan. She has been my personal assistant at the Central Academy of Drama. We've together developed Mozart's operas for the students of the academy," said Muus, who, with Danish and American roots, is an invited foreign expert at the academy, coaching the students who major in opera performance.

"When she told me about the idea of the two songs and invited me to write the lyrics in English and German, I was very happy because it's a great way to inspire people with music in the time of a pandemic," he said.

Doris Kosloff, artistic director of Opera Connecticut and director of the Hartt Opera Theater, said when she visited Beijing in 2015 to give a master class at the Central Conservatory of Music, she met Gui.

"She possessed a beautiful voice and learned to sing very well. Even more important perhaps was the way she sang with an understanding of the texts and with the commitment of everything the composers had in mind," Kosloff said.

As she recalled, her mother let her study piano, only hoping that her daughter, who was very naughty, would become quiet. Gui's interest in singing started when she was a member of the school chorus. At 11, she came to Beijing to perform at the China International Chorus Festival, which was held at the Forbidden City Concert Hall.

"I was the leading vocalist. When the audience gave us a warm feedback, such as applause and cheers, I felt proud. For the first time, I enjoyed performing onstage as a singer and I decided to become a singer," Gui said.

At 18, she embarked on a journey to study in Europe. She enrolled at Music and Arts University of the City of Vienna with a major in solo singing. After her graduation in 2005, Gui furthered her study at the University of Music and Performing Arts Vienna and gained her bachelor's in music education in 2009 and master's in 2012.

"I returned to China, hoping to share the music knowledge I learned in Europe. Being a singer onstage and being a teacher in the classroom, now bring me great pride and achievement."

Gui is working with Muus on another Mozart opera, Magic Flute, which will be performed by students of the academy early this year.