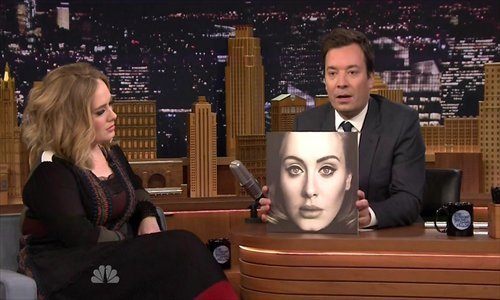 Photos of the English singer-songwriter Laurie Blue Adkins' amazing new slim and trim figure took many Chinese netizens by surprise and have stirred a heated discussion on Chinese social media as to whether the star has experienced a change for the good.

The singer was spotted with friends, including Harry Styles and James Corden, while on holiday in the British territory of Anguilla in the Eastern Caribbean on Friday.

In the photos, 31-year-old Adele styled a chic look in a black-and-white polka-dot dress, with a red bandanna around her neck and accessories in gold, including earrings, necklace and bracelets - making her limbs look more slender. She seemed in a good mood as she sat on the beach, relaxing and smiling broadly, according to one photo posted by a netizen on Instagram.

Some Chinese fans were concerned about Adele's health after she lost a large amount of weight.

"It is a bit of scary when seeing the photos. Health is the priority, and we are concerned about that," one fan posted on China's twitter-like Sina Weibo.

"She looked good when she was chubby, and now she looks like Sarah Paulson," another netizen commented.

However, others expressed their support to Adele's change, saying she is leading a healthy lifestyle.

In October, Adele joked on Instagram, "I used to cry but now I sweat." Reportedly, she activated her body's skinny gene by taking a pilates class and working in the gym with a personal trainer, as well as by focusing on a healthy diet.

"She looks even more gorgeous and glowing. Her change is an inspirational story, and I want to learn from her," one Chinese fan wrote on Weibo.

Adele was confirmed to have filed for divorce with Simon Konecki in September 2019, and many Chinese netizens suspect this big change is due to the divorce.

"I always think of Adele as the kind of performer who sings from her soul. This change of lifestyle and loss of weight might reflect a desire to escape the miasma of her failed marriage. She now looks like a different woman. It seems that sad experiences can also make people grow, and even make you stronger and more beautiful," Liu Jianran, a fan of Adele living in Beijing, told the Global Times Sunday.

"I am looking forward to her new songs to match her new look. She wrote 'Someone Like You' out of a broken relationship, and she may again produce a masterpiece on account of this divorce," one netizen posted on Weibo.