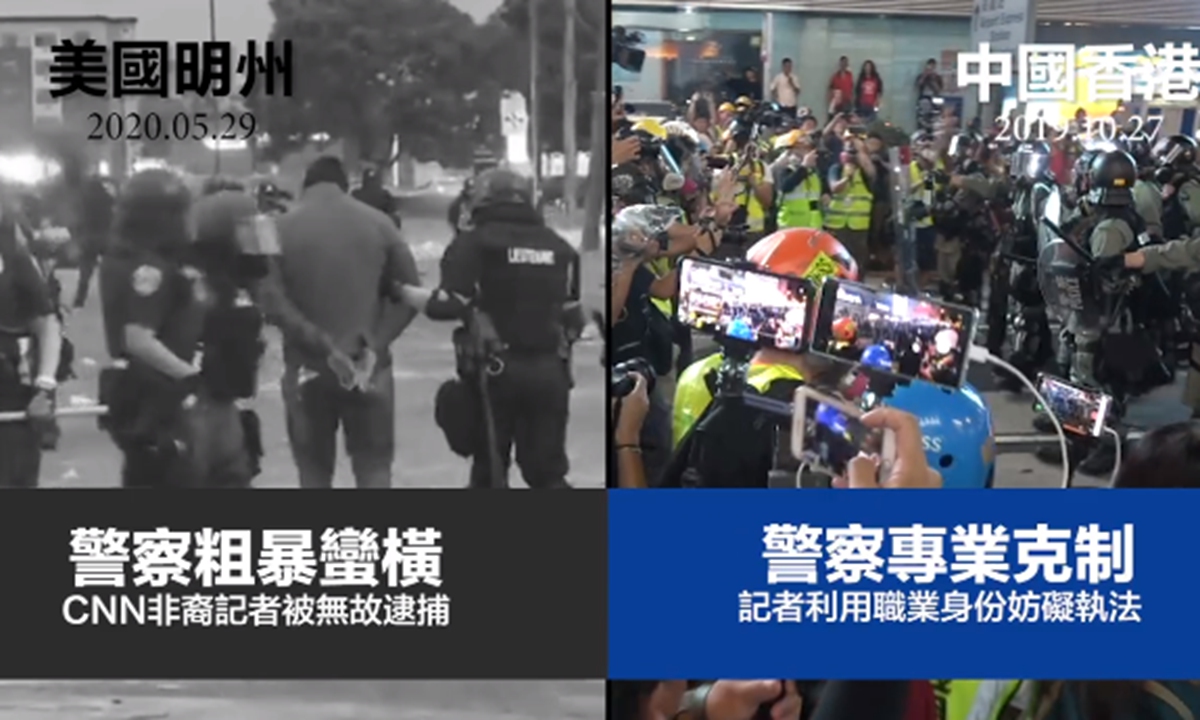 A video pointing out the differences between the Hong Kong and US police on how they handled the riots went viral, with many Chinese netizens hailing HK law enforcement for showing restraint during the 2019 riots and condemning US police for being violent and the US government for being double-standard.

The video, posted by People's Daily Saturday on Sina Weibo, displays clips of both police forces simultaneously with the US one on the left, showing CNN reporter Omar Jimenez, who identifies as both black and Latino, was arrested Friday while reporting on the protests that emerged after George Floyd, a black man in Minneapolis, who was allegedly killed by a police officer.

Floyd died after the police officer kneeled on his neck.

In the video, Jimenez asks, "Do you mind telling me why I am under arrest, sir?" after he is circled by police officers who handcuff him and take him away for no reason.

In the clip of HK law enforcement, filmed in October, police officers are surrounded by journalists, some of whom were rioters and thugs pretending to be correspondents, and who used their cellphones to record the officers while standing in front of them.

HK police remain professional and restrained, nor do they use force to confront the so-called "journalists."

Chinese netizens commented on "how restrained can Hong Kong police be," which became a hot topic search phrase, gaining over 240 million views on Sina Weibo as of Sunday, with many of them expressing their support for the officers.

"Salute to the Hong Kong police. The US' one is so rude and arrogant compared to our Hong Kong officers," said one netizen.

"The US kept using the name of freedom and saying that police used excessive forces in Hong Kong, but look what the American police do? Do they ever feel shameful?" asked another, adding that "the US government is so double-standard and only wants to cause trouble in other countries to maintain its supremacy."