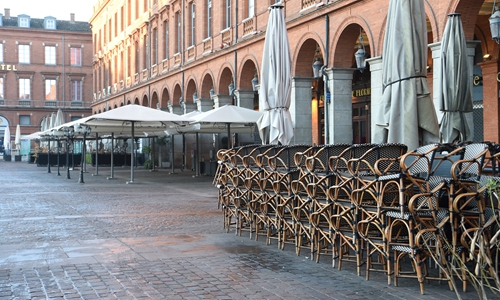 A picture taken on Sunday at the place du Capitole in the center of Toulouse, southern France showing chairs piled up as cafes and restaurants are closed amid the spread of COVID-19. ( Photo: AFP)

Furious Chinese netizens have flooded social media platforms urging the Danish government to apologize after behavior insulting Chinese people and smearing the country's epidemic control efforts was repeated in the country at a time when people called for unity to fight the pandemic.

The virus has infected more than 200,000 people and killed nearly 9,000 worldwide as of Wednesday.

Posts went viral on Chinese social media on Wednesday saying that a song to introduce the novel coronavirus to children created by a Danish education studio contained lyrics reading "I am a new virus, I come from China."

The studio Finurligefif said on its Facebook page on March 16 that the song had been downloaded several thousand times in a few weeks and reached Greenland, and it was being used by schools and hospitals.

An account named Beiou Xiaohongmao on Sina Weibo posted a seemingly apology from the studio late Wednesday, in which the company said that it had not intended to "discredit neither a country, people or anyone" and had changed the controversial phrase to "My name is Calle, no one knows where I come from."

The Global Times could not find the apology on the studio's official website or social media account, and the apology seemingly did little to calm down furious Chinese netizens, whose discontent with an insulting drawing of the Chinese flag in late January are still fresh.

Some others guessed that the apology was a compromise to seek help from China in the wake of the worsening epidemic situation in Denmark.

"Why did you write the lyrics if you knew it is not right?" a Weibo user commented.

"I require an apology from the Danish government. When we were struggling in the epidemic, you made fun of us. We are tolerant, but we have a bottom line," said another Weibo user.

Anti-Chinese sentiment has existed in northern Europe for a long time under the cover of "freedom, democracy and human rights," which makes it difficult for local governments to manage it, according to Zhang Min, head of the Science and Technology Policy Division at the Institute of European Studies, Chinese Academy of Social Sciences.

But, as the song has reached schools, analysts called for proper government interference from both sides as "the song is so destructive that it will plant a seed of anti-Chinese sentiment in children."

Some netizens also wondered why northern European countries like Denmark and Norway, which usually boast of their high social welfare, performed disappointingly in the COVID-19 pandemic.

As of Wednesday, Denmark reported a total of 1,024 infections while Norway reported 549. Both countries have stopped testing for people with mild symptoms.

The governments of these countries are rich but they do not want to invest many resources in the fight against the pandemic, which would bring about huge financial losses. After all, they and owners of capital in both countries care less about people as human lives than their labor as an element in the cost performance formula, some Chinese analysts pointed out.