A recent photo of former UK soccer player David Beckham went viral on Chinese social media on Wednesday. While photos of the star have trended in the past due to his good looks, this time it was his clearly thinning hair that captured netizens' attention. 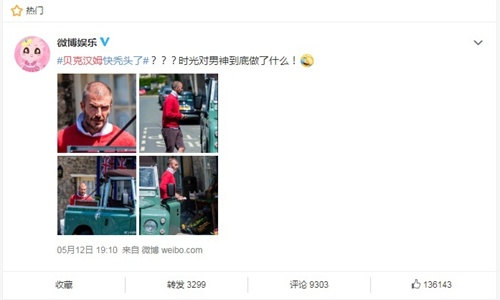 The photo posted on Sina Weibo shows that the 45-year-old athlete's hair has thinned over the past three months, drawing almost 137,000 comments.

The news came as something of a shock for some netizens, while others commented that once a man is in his 40s, hair loss is as natural as what happens to a dandelion in the wind. Quite a few took a more humorous approach, joking that Beckham may need a new brand of shampoo.

Many fans reminisced about what first attracted them to Beckham when they were young students.

There were also some female fans who said they don't mind if Beckham goes completely bald, "He is still very handsome no matter what."