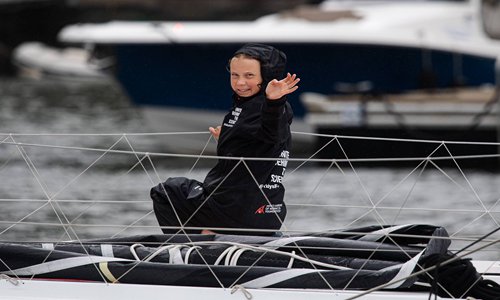 Swedish climate activist Greta Thunberg, 16, waves upon arrival at harbor in New York, the US on Wednesday after sailing across the Atlantic Ocean in a zero-carbon yacht to attend the UN Climate Action Summit in September. (Photo: VCG)

Chinese netizens recommend the Swedish environmental activist Greta Thunberg, if she ever comes to the country, to go to Northwest China to gain a better understanding of how Chinese people effectively combat desertification in real life, and she might as well help plant some trees there herself.

The 17-year-old, in an interview on Friday with Japan's Kyodo News, said she would travel to different parts of the world to deliver her message, including Asian destinations such as China and Japan.

Thunberg sparked a global youth movement when she began her "school strike for the climate" campaign in 2018, skipping school on Fridays to protest outside the Swedish parliament in an effort to highlight global environmental problems.

Thunberg's activism propelled her onto the world stage and in 2019 she addressed major UN climate conferences in New York and Madrid, which she described as an "incredible" opportunity. She was also named Time magazine's Person of the Year, the youngest recipient in the history of the award.

The Swedish teenager was also involved in a high-profile online interaction with Hong Kong separatist and activist Joshua Wong Chi-fung in December 2019, which encountered criticism from not only Chinese netizens but also global internet users.

However, Chinese net users still extended welcome to the controversial activist online on Monday, with many commenting that she should come to take a look at how the Chinese people effectively control desertification in the Northwest China herself.

Official statistics showed that the area of desertified land in China shrinks by an annual average of 2,424 square kilometers, compared to an expansion of 10,400 square kilometers at the end of the last century, the Xinhua News Agency reported in December 2019.