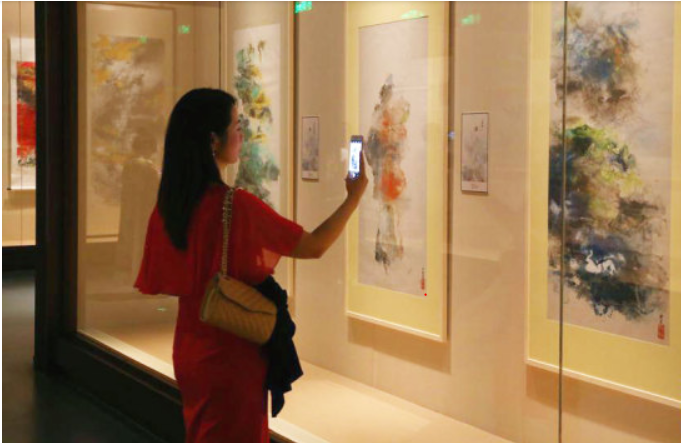 With the efforts of a museum in Silicon Valley, a 103-year-old Chinese painter's whole life story has been preserved and is available to the public.

Los Altos History Museum has recently interviewed Hou Beiren, a renowned contemporary Chinese painter in California, for an oral history program with the aim of preserving the artist's history and raising the awareness of diverse culture in the United States.

"The United States needs people that can help bring the best of their culture to the country, and he is an example of someone who's brought a wonderful piece of Chinese culture to more public awareness in the United States. It's a very important contribution to our cultural life here," said Elizabeth Ward, executive director of the museum, on Saturday.

Born in 1917 in Liaoning Province, China, Hou moved to the United States from China's Hong Kong in 1956 and has since lived in Los Altos, a city in northern Silicon Valley.

For more than 60 years, he has been receiving worldwide acclaim for his signature "splash ink and color" style that fuses the traditions of Eastern brush painting with Western impressionism.

Hou's works have been exhibited and collected in the United States and China, including the Asian Art Museum in San Francisco, San Jose Museum of Art, and National Art Museum of China. Hou, still in good health, opened a new exhibition last week in Santa Clara County, California.

"We were very honored that he decided to share his story with us, so that anyone can come to the museum and read his story," said Ward.

During the interview, the art master shared the story of the teachers that influenced him when he was growing up and why he decided to become an artist.

Ward said they were making plans to change the permanent exhibit so that Hou would be in the new exhibit. The museum is also working to put some pieces from the oral history project on the internet.

In 2016, the museum organized a special exhibition in honor of Hou's 100th birthday.

"Los Altos is a diverse community. But it's not always recognized for the amount of diversity. Everyone just thinks it's all high-tech, but there's actually a huge art community in the area, so we definitely like to preserve stories of people who have dual heritage," said Ward.

The museum's works are to preserve history and make sure that the truth is known, because people rely on stereotypes so much. "When we have that story, it's a witness," she said.

"He is a witness to a different way of living in Santa Clara County, and we are happy to preserve that story and to make it known to more people," Ward added.