It’s kind of ironic that a man who had a religious zeal to save lives should die tragically at the hands of an assassin. Yet this was quite common of the tumultuous times during the war against Japanese invaders.

Lu Bohong, also known as Joseph Lo Pa Hong, was a well-known Catholic entrepreneur and philanthropist, who founded several hospitals and businesses in Shanghai. Yet in 1937 he was murdered in the French Concession under mysterious circumstances.

Lu founded the Sacred Heart Hospital, predecessor of the First Rehabilitation Hospital of Shanghai.  A stylish chapel and a modern maternity ward both built in 1932 showcase the history of a hospital built for poor Chinese workers.

Hospital archives reveal Lu founded the Sacred Heart Hospital in 1923 for Chinese people who worked in the nearby factories in Yangpu District.

The hospital used several Chinese houses as a temporary dispensary. As the houses struggled to take in more patients, Lu and some other philanthropists purchased a site on Ningguo Road and built five new-style ward buildings in 1923. In 1932, the chapel and a maternity ward were added to the hospital. 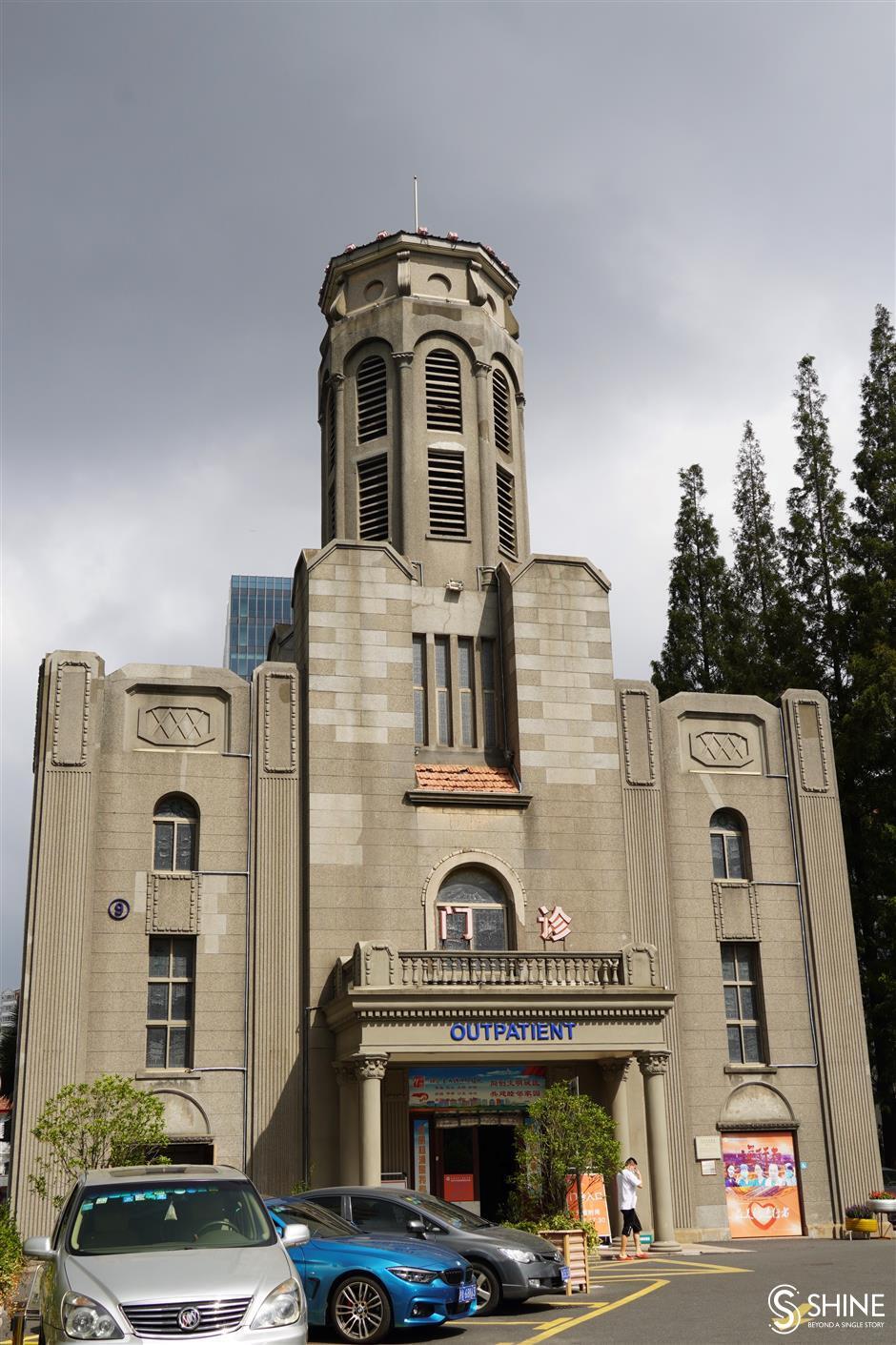 The chapel was designed by Russian architect Livin Goldenstadt in 1932 for the Sacred Heart Hospital. 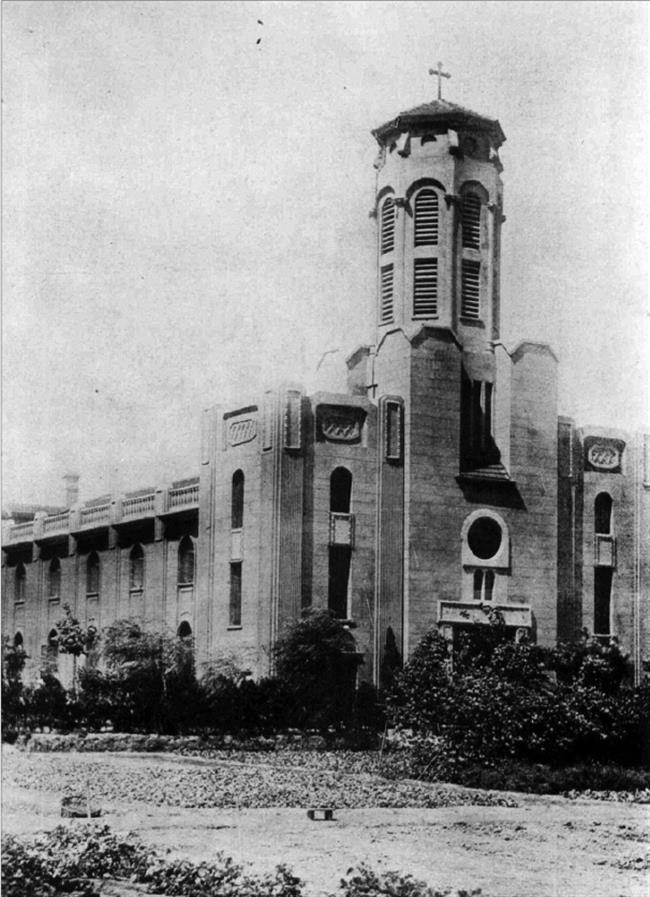 The North-China Herald reported on March 7, 1934, that the new maternity ward was constructed under the instruction of Lo Yin-kung, son of Lu Bohong and vice-president of the Sacred Heart Hospital. The hospital’s authorities on 41 Ningkuo Road celebrated the formal opening of the new ward with a ceremony attended by a big gathering of foreigners and Chinese people, including Shanghai mayor Wu Tiecheng.

“Modern in every respect, from the soft-toned walls to the efficient operation rooms, the new ward is a three-story building capable of accommodating more than 80 beds, of which 30 are for first-class patients while the remaining for second-class. Pleasant sunshine is guaranteed as it overlooks a large piece of vacant ground, which will be beautified with trees and flowers. The maternity ward and operation rooms are on the top floor,” the 1934 report said.

Shanghai H. N. A. Architects Co Ltd reveals the chapel and maternity ward building are concrete-and-steel structures both designed by Russian architect Livin Goldenstadt. The hospital compound also features several other brick-and-wood buildings built in the 1920s and 1970s. Among them, the chapel has been listed as a Shanghai historical building while the others are all heritage sites under the preservation of Yangpu District.

“Born in 1878 in Vladivostok, the architect moved to China and worked in Shanghai for 13 years. The styles of his Shanghai works switched between classic revival and Art Deco styles. In addition to the Sacred Heart Hospital, he also designed the Astrid Apartments, a striking building of apartments in an Art Deco style situated on the corner of Maoming and Nanchang roads. The composition of an axis on the facade mirrors the chapel of the Sacred Heart Hospital,” said Wang Lingxiao from H. N. A. Architects. Co., Ltd, whose firm researched the hospital’s architectural history for an upcoming restoration project.

“It’s interesting that this architect adapted an Art Deco style for the interior design of another of his work, the Clement’s Apartments in classic revival style on Fuxing Road M. But he used a strong classic style axis decoration on the Art Deco Astrid Apartments.” 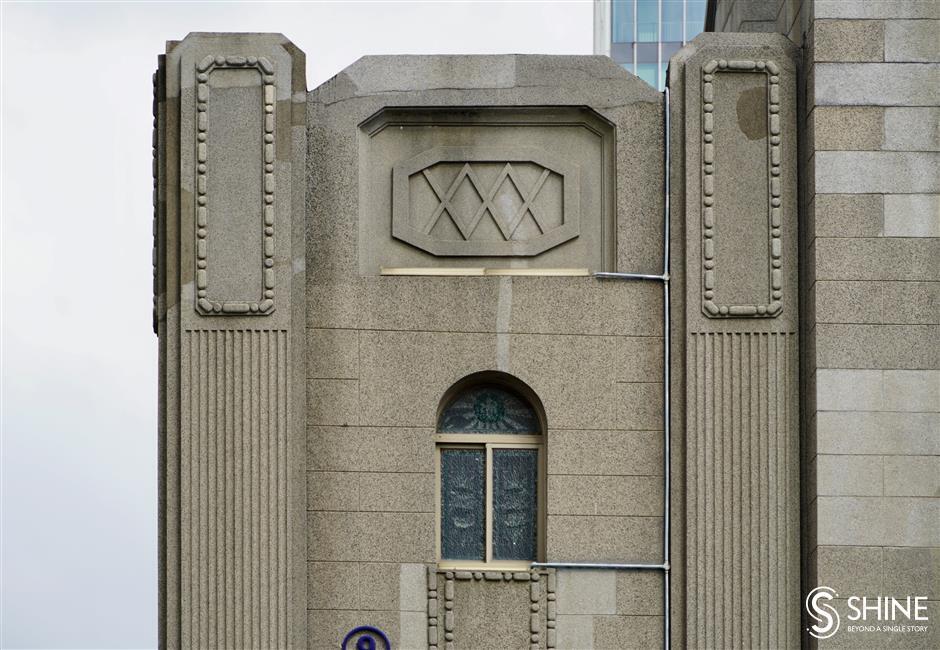 The chapel is decorated with vertical lines.

The chapel in a basilica layout features an Art Deco tower decorated with vertical lines. The facade formerly had an exquisite stained glass rose window. The interior hall is still flanked by two colonnades. The original colorful tiles on the floor and the ornamental ceiling are well preserved. The maternity ward building also bears the original English name on the facade. The hospital buildings are placed around a central garden, which displays a scientific planning of the hospital. The Sacred Heart Hospital was one of Lu Bohong’s major philanthropic projects. 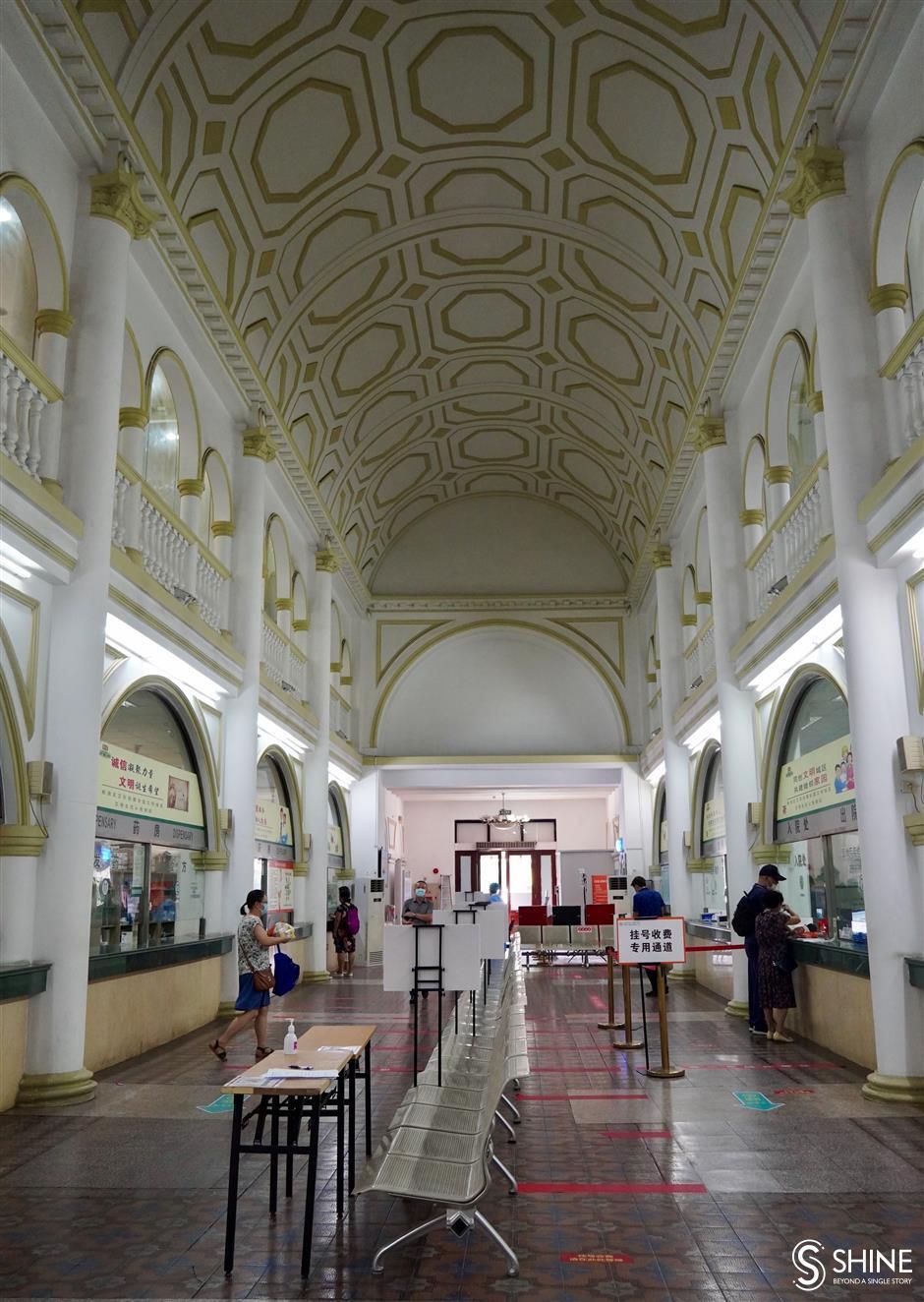 The interior hall of the chapel is still flanked by two colonnades. 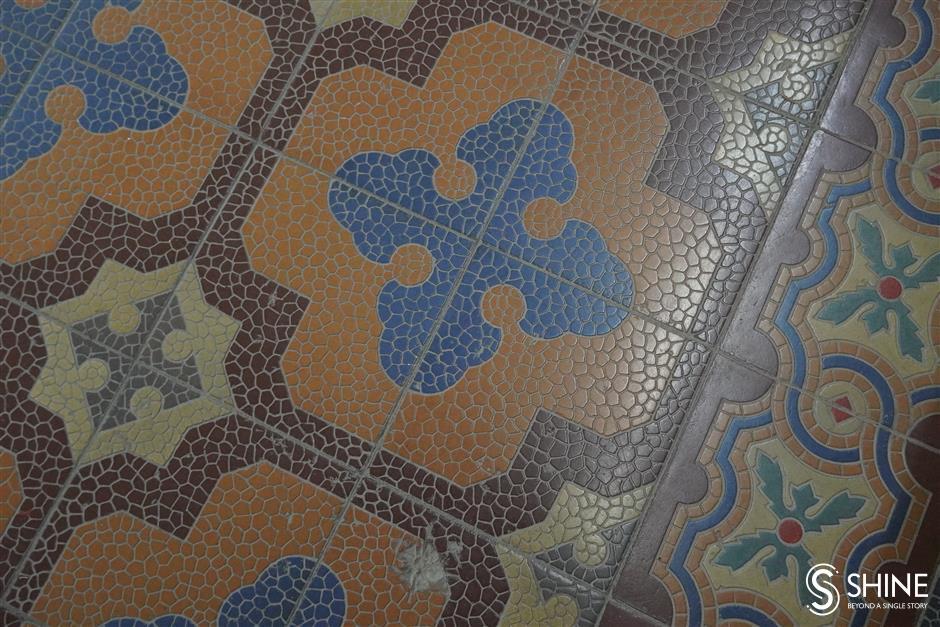 The original colorful tiles on the floor of the chapel

“He was born into a family in the old Nanshi district of Shanghai and a neighbor of another renowned Chinese Catholic Family, Xu Guangqi, a Ming Dynasty (1368-1644) minister whom Xujiahui was named after. Lu’s family was influenced by Xu to convert to Christianity. Adept at doing business with the French, Lu founded a galaxy of companies, religious institutions and philanthropic projects.” 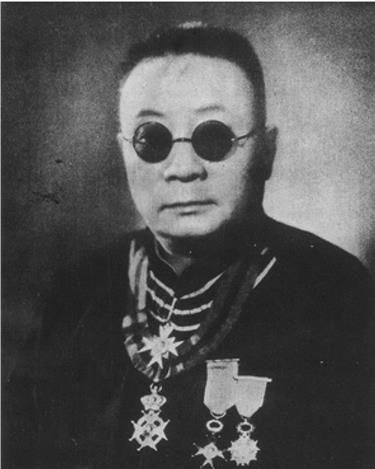 A file photo of Lu Bohong

A famous Chinese entrepreneur and leader in modern Shanghai, Lu founded the first Chinese-invested iron factory and was elected as one of the first five Chinese members of the former French Municipal Council.

He was appointed president of the board of Shanghai’s Catholic primary and secondary schools, the director of the largest Chinese water and electricity providers and the director of companies in the shipping and steel industry.

Lu’s humanitarian activities extended to all layers of society. He was the founder and director of several colleges and hospitals, and co-operated with other Catholic and international charity and educational organizations. In addition to the Sacred Heart Hospital, Lu also founded the Sacred Heart School for Women and commissioned architect L. E. Hudec to design the building, which is the Changcheng Hotel on Meizhou Road today near the hospital.

“Managing an extensive network for charity donations, Lu Bohong became a man of great power. At the same time he played a key role in Shanghai’s business life, holding numerous titles in trade and industrial businesses as well as in church and educational institutions. Lu Bohong had a natural talent for successfully liaising in a web of interests in Shanghai’s economic and political life, part of which was public, the other part clandestine, hidden behind secret societies that operated in the city,” Italian architectural historian Luca Poncellini said in his book “Laszlo Hudec.”

In addition to saving the lives of Chinese workers, the Sacred Heart Hospital is significant in Shanghai medical history for hosting a physio-therapeutical department of the Sino-Belgium Radium Institute in its grounds. The North-China Herald called the project founded with the Boxer Indemnity Fund “the first anti-cancer center in China,” on March 31 1937. 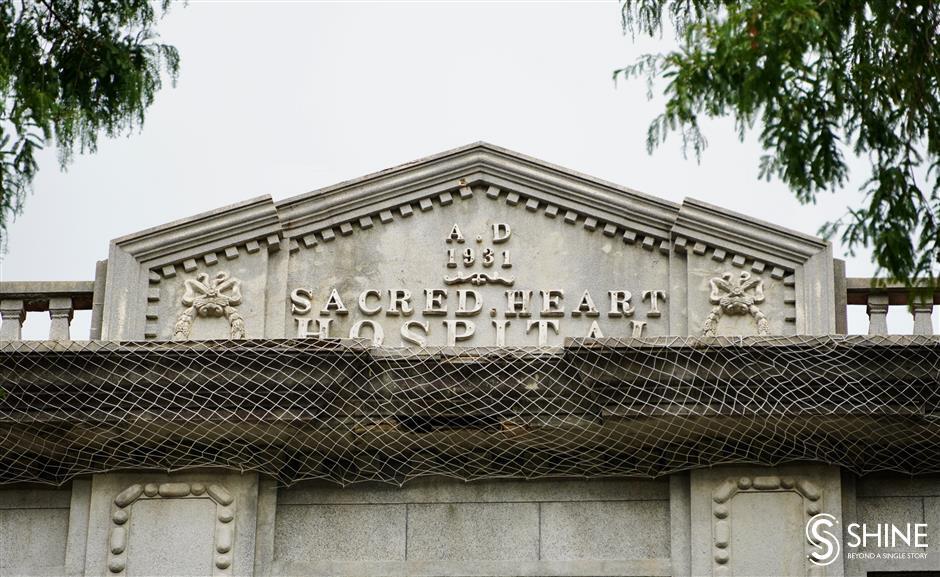 The original name of the Sacred Heart Hospital is still seen on top of its historical ward building.

However later that year on 30 December, Lu Bohong was assassinated on Avenue Dubail (today’s Chongqing Road S.) The 63-year-old man died on his way to Saint Marie’s Hospital, now Ruijin Hospital. The reason of his assassination remains a mystery. No one was arrested for the murder and the case remains unresolved.

After 1949, the Sacred Heart Hospital endured changes and developed into the city’s first professional hospital of rehabilitation since 2012.

“Our hospital was founded to answer the growing need and attention for rehabilitation care following the 2008 Sichuan Earthquake. Now we have more than 500 beds, 54 rehabilitation doctors, 160 therapists and the world’s most cutting-edge equipment, including robots, VR, heart rehabilitation and children’s sensory integration assessment,” said Zhou Mingcheng, director of the First Rehabilitation Hospital of Shanghai.

“After the restoration, we will open the chapel as a library to the public and exhibit hospital history on its second floor. Our goal is to build a rehabilitation medical center of Asia and seek new development on historical buildings,” he said. 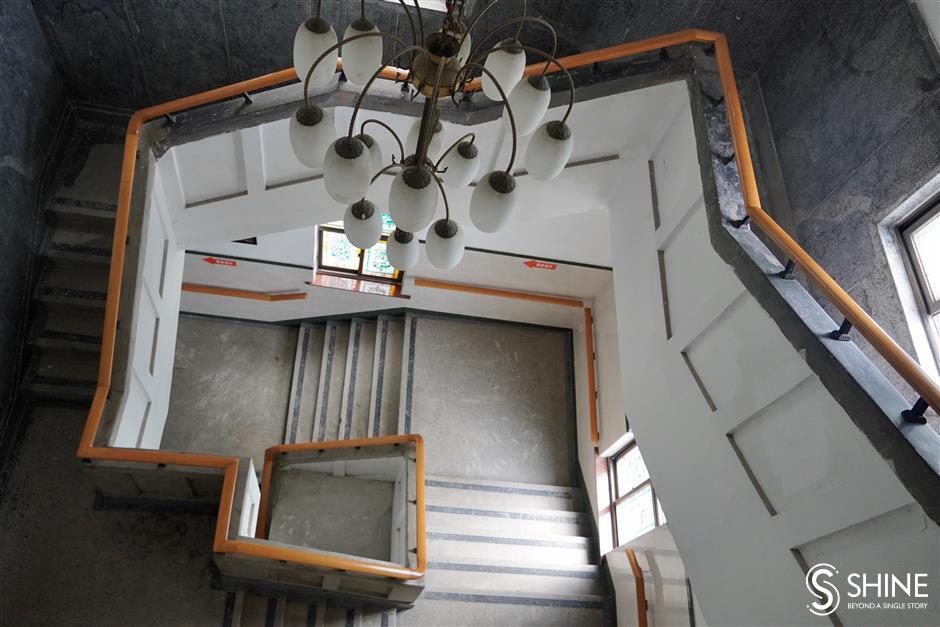 The artfully designed staircase leads to the bell tower of the chapel.

Tips: The chapel is open to patients. The facade can be admired on Hangzhou Road.

Despite being situated in a somewhat remote part of Shanghai and its work virtually unknown to all except to the medical profession, the Sino-Belgium Radium Institute continues its dedication to cancer cure and cancer research.

The institute, in the grounds of Sacred Heart Hospital, Yangtszepoo, is the first anti-cancer center in China. It joined a host of other centers carrying out research into the dreaded disease only two weeks ago.

When the Sacred Heart Hospital was founded, the Sino-Belgium Radium Institute contributed the money necessary to found a physio-therapeutical department, (drawing it from the Boxer Indemnity Fund), specializing in the treatment of cancer, this was founded in 1931. Early in 1936, the whole institute was completely re-organized, making it independent of the hospital. The aim being to enlarge the scope of the anti-cancer measures.

The institute’s director M. A. Hilliadis, formerly attached to the Institute of Cancer at Louvin University, Belgium, has five Chinese doctors working under him — the only Chinese people in the country to be trained in anti-cancer work.

Once a cancer suspect has been admitted to the institute, he is examined by each staff doctor, in order to determine whether or not he has cancer, and if he has, what particular type of cancer it is. One of the principal methods of determining the existence of cancer is by the examination of a minute particle of a tumor taken from the patient.

The excellent work which the institute has been carrying out since its foundation is well illustrated by the fact that 500 cases of suspected cancer have responded to treatment. Each case dealt with is followed up carefully afterwards for a period of five years. Some show no recurrence of the disease, while in others cancer breaks out again after a year or two, and they have to return for further treatment. Between 700 to 800 cancer cases are dealt with by the institute each year.