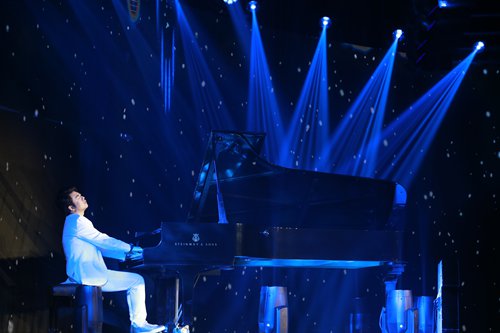 After a long absence due to an injured left hand, Chinese pianist Lang Lang celebrated his return to classical music with a performance at the Asian launch ceremony of his latest studio album Piano Book on Monday in Beijing.

Dressed in an all white suit, Lang raised himself up from his stool a bit to put more strength into his fingertips as he played an emotional tune that washed over the audience.

However, this wasn't some technically flashy performance of a Beethoven symphony or a dramatic interpretation of a Tchaikovsky piano concerto, it was "Merry Christmas Mr. Lawrence," a song composed by Ryuichi Sakamoto for the 1983 movie of the same name.

The song is included on Lang's Piano Book, along with other songs from famous movie soundtracks, classical tunes from different countries and classical piano pieces suitable for beginners.

It was undoubtedly an emotional moment for Lang when he had to cancel a series of concerts and step out of the spotlight from April 2017 to July 2018 due to severe inflammation of his left hand. For the new album, Lang has chosen those music pieces that inspired him to be a pianist in the first place. According to the musician, their inclusion was also an attempt to recapture the eager feeling he had when he first started playing the piano.

Lang's first major performance at the Tanglewood Music Center in Massachusetts in July 2018 was considered a significant event since he is considered one of the "biggest and most bankable" stars in classical music, according to a 2018 New York Times report.

While Lang has not performed many concerts with top-tier orchestras since his return, that doesn't mean he has not been actively marketing himself. In fact, he has frequently taken part in events where classical music and other industries collide. For example, he played a song from popular singer JJ Lin at Chinese social media giant Sina Weibo's annual pop culture award show in January and attended a ceremony hosted by Sina Sports honoring him as the most influential figure in Chinese sports for all the classical music performances he has given at major sports events around the world over the past two decades.

Most recently, he took part in a mash up between classical music and the ACG (anime, comic and game) industry by performing on stage besides Chinese virtual idol Luo Tianyi in Shanghai on Saturday. To some degree, Lang still remains a representative of classical music in China.

At Monday's launch ceremony, Lang was asked if his commercial success has hindered his artistic development.

"Playing piano very well is my primary principle," he replied.

"However, since we live in a multidisciplinary world, I think it's better for a classical music artist to be supported by friends and partners in other fields as well so we can increase the influence of the music genre," he added.

"I wanted to make an album that caters to a large number of music lovers and piano learners," Lang noted when talking about his original intentions in releasing Piano Book. He further explained that "when I was little, I was always eagerly looking for recordings of relatively simple classic music pieces by piano masters but I couldn't find any."

From cooperating with publishers to publish piano books to establishing the Lang Lang International Music Foundation and founding his own piano school, Lang has made various moves to realize his dreams of promoting classical music education and, in his words, "to nurture the land of classical music."

"I quite enjoy teaching piano, especially when I encounter very capable young talents. I can see shadows of myself in them and also learn a lot from them," said Lang. On several occasions, Lang has cooperated with excellent students from around the world, such as his performance of "Rhapsody in Blue" at Carnegie Hall in October 2017 during which, due to his injury, he invited his teenaged protégé Maxim Lando to act as his left hand.

"I know that foreign kids who play piano sometimes learn from watching my teaching videos," he said confidently.

He noted that this is the reason that he included Chinese music pieces like "The Merry Shepherd Boy" and "Jasmine Flower" on the new album, hoping that doing so will help promote Chinese melodies around the world.

At the Shenzhen venue of this year's Spring Festival gala on February 4, Lang once again entertained Chinese audiences throughout the country by performing alongside 150 other pianists, some of whom were students from the Lang Lang Music World program.

When asked if he thinks that China will embrace another classical music superstar in the future, he answered quickly answered: "Yes, it will."

As to his own future, Lang noted that he is already preparing his next album, which will be called Goldberg Variations.

"The thing that has consoled me [concerning my absence] is that my hand has recovered so well that I am now able to take on the challenge of Bach's 'Goldberg Variations' for my next album soon," the musician explained.