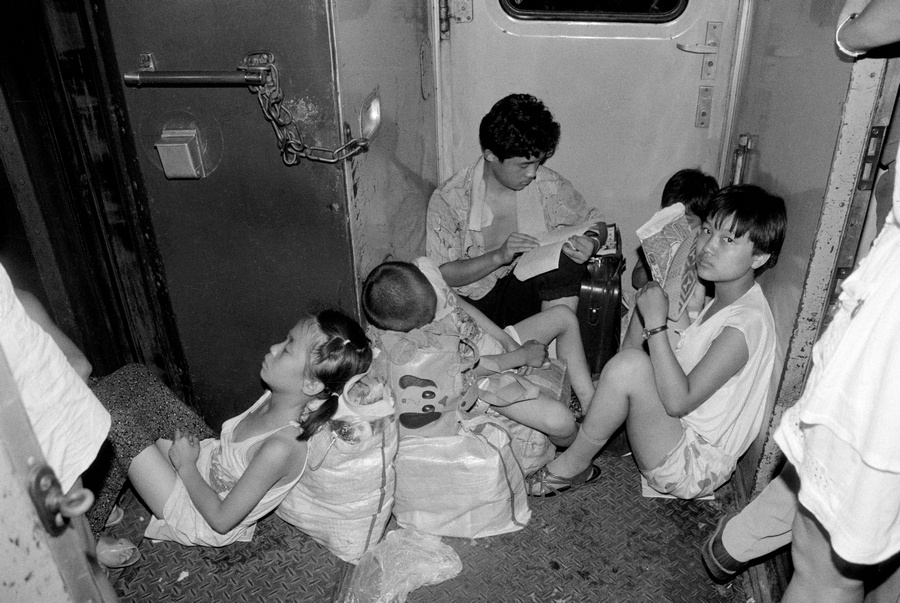 In 1988, on the K264 train of the Beijing-Baotou Railway, passengers without seats rested at the junction of the cars. In the 1970s and '80s, insufficient transport capacity resulted in overcrowding in the train. YUAN RUILUN/For China Daily

Railway is a nation's important infrastructure, and also the big artery of national economy and the backbone of the transportation system. But the driving factor, most economists agree, has been technological change and upgrade. The development of railways in different periods contains distinct feature of the time and has become a symbol of national progress. 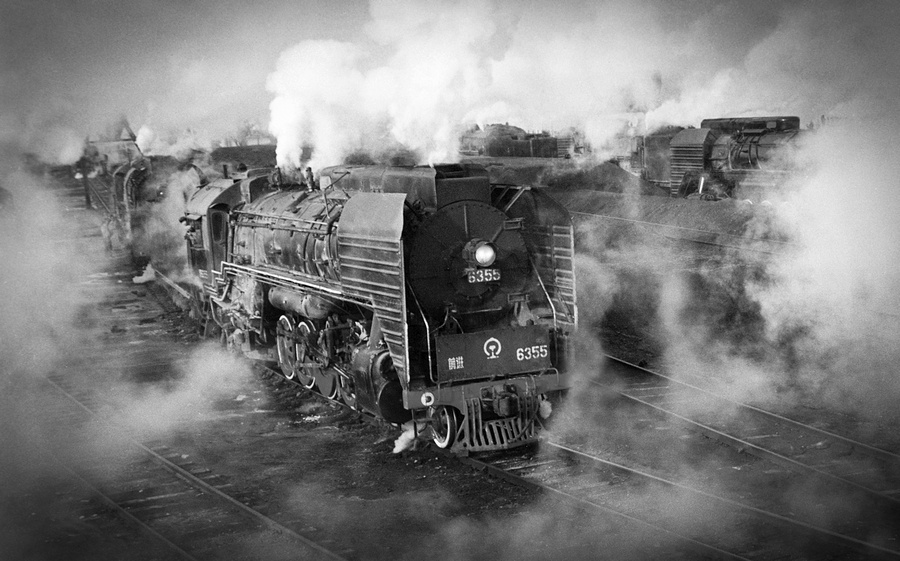 Steam locomotives at Baotou west depot in Inner Mongolia in 1978. Steam locomotives were in service in large quantities for decades after the founding of the People's Republic of China in 1949. YUAN RUILUN/For China Daily

I was born in the 1950s, and the early days after the founding of New China mark a turning point in the development of the country's railways. Later, I started to work in the railway industry and every pivotal moment in my life is accompanied by an opportunity for personal growth and creativity, thanks to the railway. 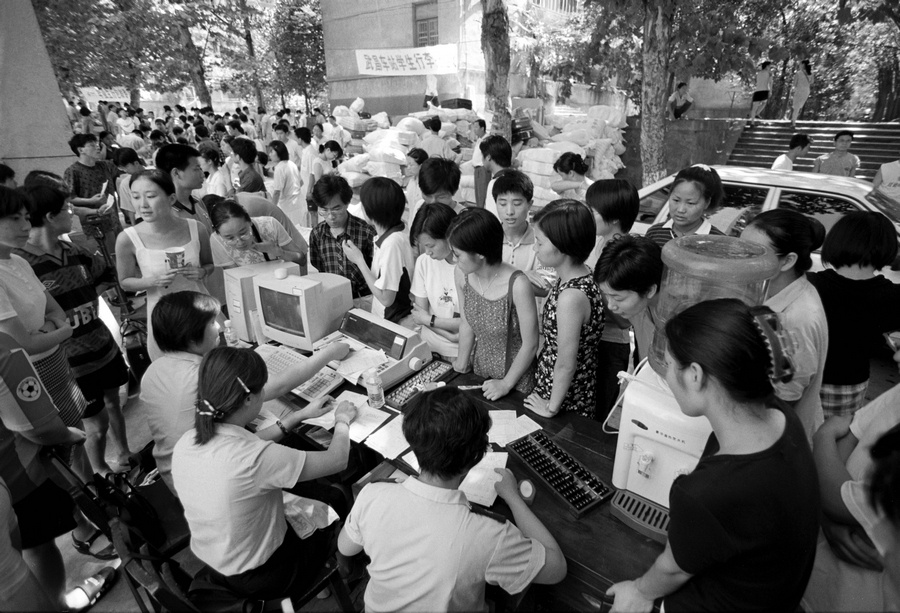 In 1999, the staff at Wuchang Station in Hubei sold summer train tickets to university students. In the late '90s, the railway ministry introduced the computer system, which greatly improved the efficiency of its ticket sales.YUAN RUILUN/For China Daily

In the past 50 years, I have been fortunate to participate, witness and experience the development and great changes of China's railways as a professional photographer. The 1970s and '80s before and after the reform and opening-up was an era of steam and locomotives. With thick white smoke and loud sirens, it was the train that took people to poetry and distance. In the '90s, the ubiquitous employment of electric locomotives increased the train speed from 70 kilometers to 120 kilometers per hour. The clatter of the train faded into a distant roar, and its lights began to twinkle into indistinctness. 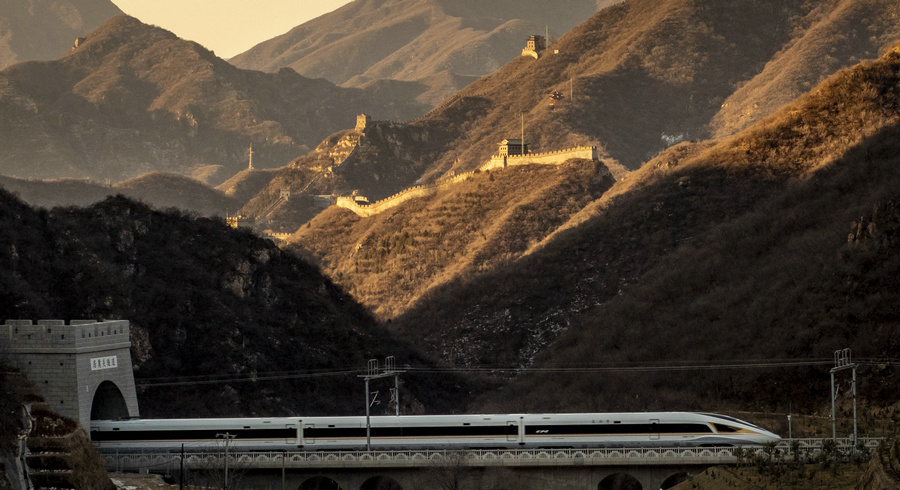 The Beijing-Zhangjiakou High-speed Railway went into service on Dec 30, 2019. The Fuxing bullet train crossed the ancient Juyong Pass of the Great Wall, where tradition blends with modernity.YUAN RUILUN/For China Daily 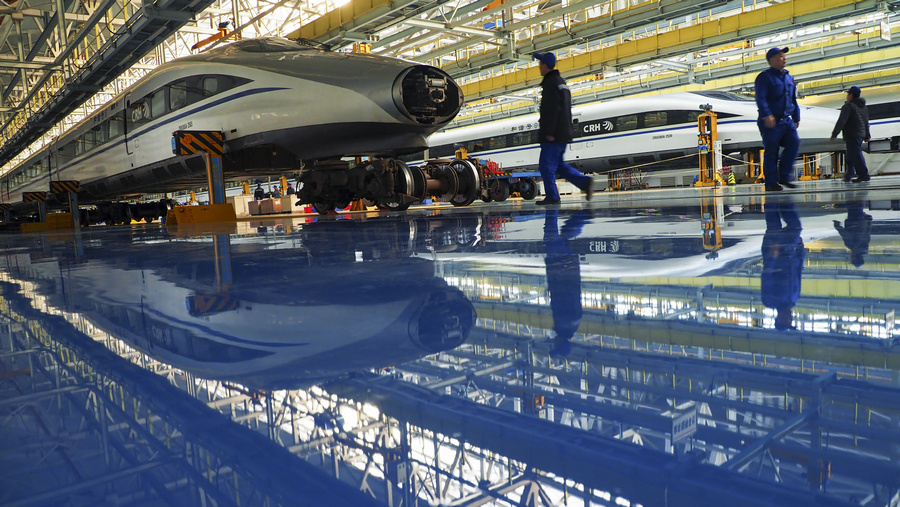 Today, the Chinese have adapted their lives to faster means of transportation and communication brought by the high-speed rail. Fuxing bullet trains advance at a top speed of 350 kilometers per hour on the broad expanse of Chinese territory. I use my camera to record the development and history of China's railways from steam, internal combustion to electric locomotives, and witnessed the whole process of its high-speed railways from scratch. The photos reflect the glorious history of Chinese railways. Behind them are the wisdom and sweat of the railway workers. I regard these photos as flashbacks, a series of dreams fed by emotions, history and memories. 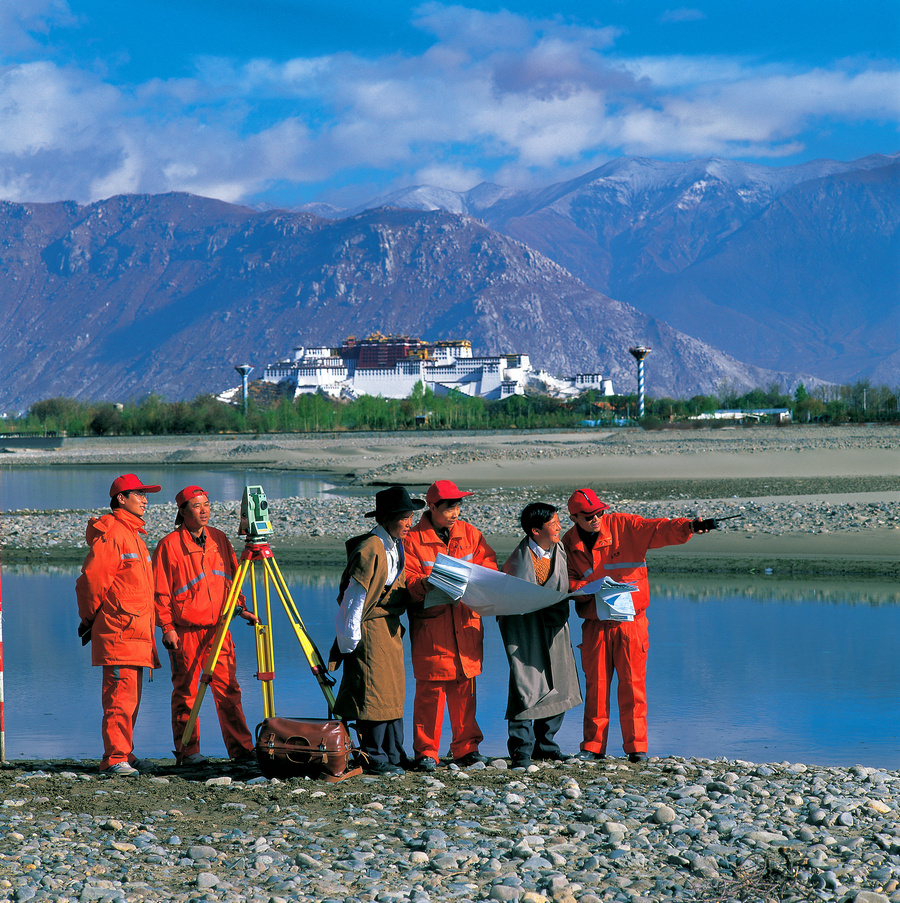 The industry has entered a golden period characterized by infrastructure improvements, better services, and high-quality transformation and development. China leads the world in terms of the scale of its transport infrastructure. Its transport service and support capacity has steadily improved, its capacity for technological innovation has markedly strengthened, and the modernization of management has made huge steps forward in this sector. As a result, the public now enjoys higher-quality travel experiences, and China is on the way to becoming a world leader in transport. 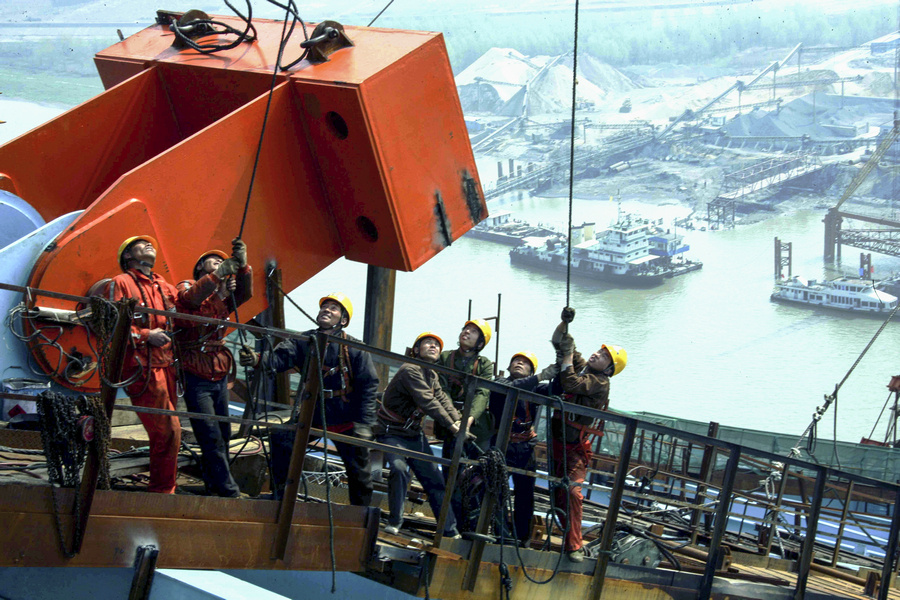 As a railway photographer, when looking back on the way in the past, I find both joys and sorrows, sufferings and happiness, failures and gains. This is the most impressive job for me among all my long-term and part-time occupations. Be it the railway on the prairie, plateau or the Gobi Desert, I have photographed them and they occupy a major fraction of my deepest memory－from the plains to the snow-covered plateau at an altitude of more than 5,000 meters, from the southern seashore to the far north, and from the northwestern hinterland across the country to Hong Kong, pearl of the East. 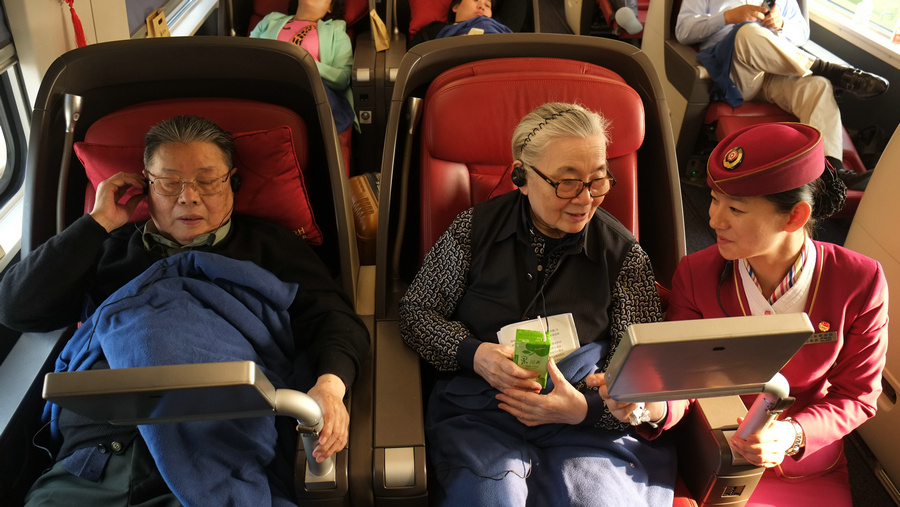 A train attendant explained the use of audio-visual equipment to passengers in April 2015. Convenience and comfort make high-speed rail the first choice for many Chinese. YUAN RUILUN/For China Daily

The major events of Chinese railway have been recorded in my lens one by one. I climbed up the mountains at night, rushed to the rivers in the dawn, braved the severe cold in the wind and snow, and probed deep under the scorching sun, all for recording the unimpeded and ever-changing trains. Perseverance is the master impulse of the firmest souls. Real happiness lies in the fruit of labor produced by the railway workers' sweat and toil. I couldn't help but focus my lens on them. The more I photograph, the more I love Chinese railways. It gradually becomes my responsibility to record Chinese railways and the workers. Time－nobody knew how much of it－swept by unheeded and unnoted. The past 50 years seem like a song, as well as a dream. Thanks to the railway, I have had the privilege to travel across the country.