Nobel Laureate V.S. Naipaul, the Caribbean-British novelist who explored the traumas of post-colonial change, died at the age of 85 on Saturday, igniting a wave of mourning among his fans in China. 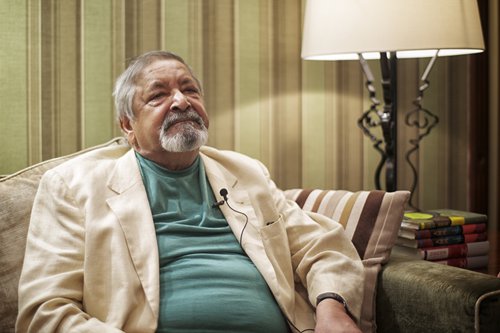 Naipaul, born in Trinidad and the son of an Indian civil servant, was well known around the world for his works A House for Mr Biswas, A Bend in the River, Miguel Street and his Indian trilogy: An Area of Darkness, India: A Million Mutinies Now and India: A Wounded Civilization.

Given his immigrant experience and multi-cultural background, Naipaul observed the world from a unique perspective free from particular cultural limits. A symbol of modern rootlessness, he inspired people to think more about history and life, which resonated with many Chinese readers.

In China, his works Miguel Street, A Bend in the River and An Area of Darkness were some of his most well-received works. All three books currently hold an 8.5/10 on Chinese review site Douban.

"The best thing I loved about Naipaul is that he presented a complicated life to us without analyzing it, which helped bring about a wider acceptance and deeper understanding of humanity," wrote neitizen Bai Bangni in a review of Miguel Street on Douban.

"The most meaningful life is spent by those who passed away, yet people can still get to know him and his extraordinary thoughts and emotions by reading his works… Have a good journey on your way to heaven," wrote netizen insFengsheji on Sina Weibo.

In August of 2014, Naipaul attended the Shanghai Book Fair. Unfortunately, the elderly writer, who celebrated his 82nd birthday while in the city and was described by Chinese media as "physically weak," was rather quiet during his time on stage, leaving his wife, Pakistani journalist Nadira Alvi, to answer most of the questions directed at him. Naturally, this left some Chinese fans disappointed.

However, the author did express interest in writing a book about China during his visit. However, this has only added to the pain of Chinese fans now that the author has passed without doing so.

Despite Chinese readers' love and respect for his work, Naipaul's personal life and his views on women have stirred controversy in China, especially after the Chinese version of The World Is What It Is: The Authorized Biography of V.S. Naipaul hit shelves in the country. His history of infidelity while married to his first wife Patricia Ann Hale Naipaul raised eyebrows, while his claim that women write with "sentimentality, the narrow view of the world" sparked anger. For this reason some Chinese netizens have labeled him as "half genius, half scumbag."