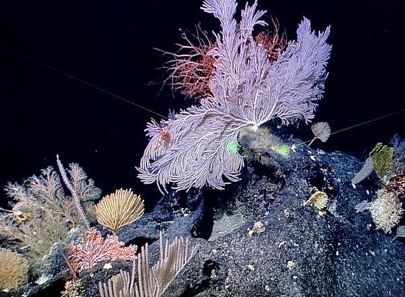 The submersible Discovery, attached to China's research vessel the Kexue has detected a coral forest in the Mariana Trench on Tuesday. (Photo: Xinhua)

A Chinese research team found rare coral forests in the Mariana Trench, the deepest place of the earth, during a recent dive of the Discovery, a remotely operated deep-water submersible. Using the Discovery, scientists captured a real-time high definition video from the Mariana Trench at the depth of 880 meters underwater showing the iridescent coral forests, the Xinhua News Agency reported on Tuesday night.Various corals including the golden gorgonians, ugly gorgonians, black corals, sponges and squat lobsters, were discovered during the dive.  Zheng Xinqing, a research fellow from the Third Institute of Oceanography under the Ministry of Natural Resources, told the Global Times Wednesday the detection of coral forests at such a deep depth offers essential scientific research value to the study of the biological diversity and marine gene resources on Earth. The deep-sea corals could be used as a new potential material for artificial bones, Lin Hongmin, an adviser to the Hainan Provincial Maritime Environment Protection Association, told the Global Times. 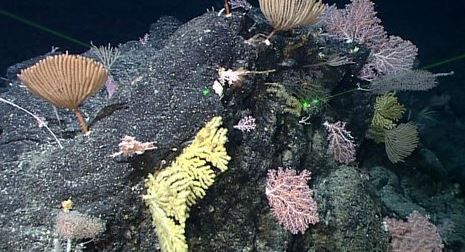 The submersible Discovery, attached to China's research vessel the Kexue has detected a coral forest in the Mariana Trench on Tuesday. (Photo: Xinhua)

Coral is to the oceans what a "rainforest" is to land. Coral reefs, accounting for less than two-thousandths of the ocean's floor surface, support a quarter of the world's marine life. Coral conservation is about preserving marine biodiversity, analysts said.

"Coral forests are widely seen between 30 degrees north and south latitude and the two poles. The seamount under investigation is located in an oligotrophic sea area at 10 degrees north latitude. It is very rare to see such a multicolored coral forest," Xu Kuidong, chief scientist of the voyage and research fellow at the Institute of Oceanography, Chinese Academy of Sciences, was quoted by Xinhua as saying. The western Pacific Ocean within 20 degrees latitude is called the oligotrophic sea area because it is far from land, and there are no supplementary nutrients from land sources. The upper and lower water levels have different temperatures, which result in the lack of abundant nutrients from the  upper layers.Those coral forests grow in a seamount area where there is a mixture of ocean currents, which could bring abundant food for the corals. The stable environment of the seamount also offers the corals a habitat to grow, the Xinhua report said. China's research vessel the Kexue (which means science in Chinese) is carrying out a 20-day investigation over a series of seamounts in the south Mariana Trench. It set sail from Qingdao, East China's Shandong Province on May 18 and is scheduled to return to Xiamen, East China's Fujian Province on June 23.